Every Chinese New Year, the shopping centres in town will go all out with their decorations and have different themes to entice people to drop by. This year, Suria KLCC's theme is based on "Golden Memories". Harking back to those days where life was oh so simple!, Suria KLCC has constructed a wooden Chinese village house measuring 44 square metres. You get to peek into how a Chinese family celebrates the festive season with all those traditional old world values that seem to be missing nowadays. 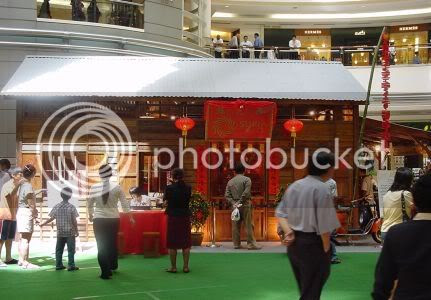 It was not easy to capture a picture of the house as people were milling around it peeking through the drawstring curtains to see how life was in the olden days i.e. the 50s and 60s era. The wooden house is niftly decorated with Chinese New Year decorations on the outside with lanterns flanking the door, auspicious writings on each side of the entrance and a really long string of firecrackers on one side of the roof. I'm sure in those olden days, there were no firecracker bans so they would have let that long string rip and herald the new year with a loud bang! 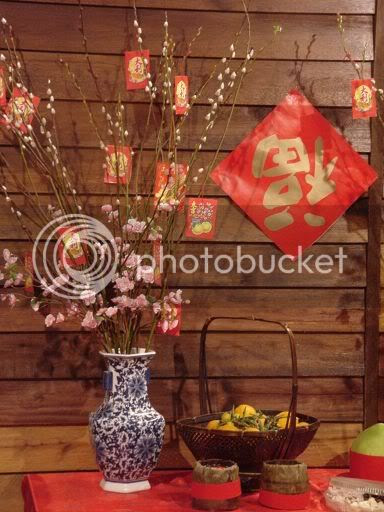 I peeked into the wooden house and the living room was simply decorated with a table covered with a red cloth and red paper stuck on the wooden boards. The chinese character on the paper is "Fu" which means blessing or happiness in Chinese. The character is always pasted upside down as the reversed fu means happiness is coming in Chinese.

On the table they had two vases with the pussy willows and plum blossoms which were decorated with angpow packets. There were also traditional Chinese New Year foods placed on the table like nian gao made from brown sugar and glutinous rice flour in containers fashioned from banana leaves. This delicacy is said to have multiple meanings: the glutinous rice flour means cohesiveness, the round shape means family unity, the sugar means sweetness in life and the rise in the cake indicates a rising fortune. There are also pomelos which symbolise abundance and prosperity. 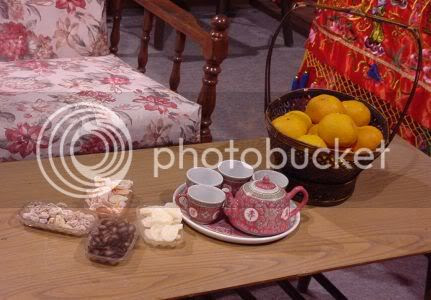 Their coffee table was all decked out for guests that will come and visit during Chinese New Year with traditional foods that have a different meanings. The mandarin oranges which is known as "kam" in Chinese signifies gold and wealth. The tea set is for the youngsters to serve tea as a sign of respect to the elders. After greeting them with well wishes for the new year, they are given angpows which contain lucky money for them to buy treats with. There is no elaborate tray of togetherness in those olden days but they serve dried fruits that will bring prosperity and kuaci (melon) seeds that brings lots of children to the family. 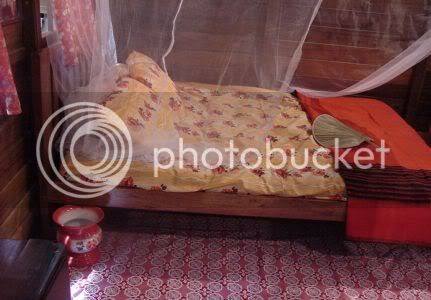 Even the bedroom looks like the olden days with a mosquito net over the bed to keep out those pesky mosquitoes from making you their dinner. As there is no air-conditioner during those days, you make do with a bamboo fan to keep cool. There's even a little potty at the side of the bed. During the old times, the toilets will be outside or there is only one to be shared among a few people hence these metal potties were a convenient choice to relieve yourself. If these bowls are placed in the living room, they are used as a spittoon to prevent old folks from spitting on the ground. 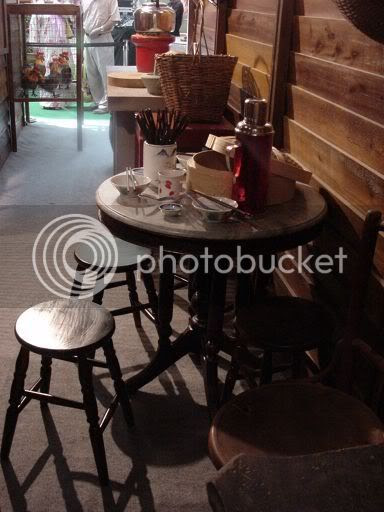 The backyard area has a simple wooden table and chairs for you to eat your meals. There's also a charcoal burner for you to boil water to keep in your metal flask. There's even a cage with chickens roosting inside by the side of the house that will keep you supplied with fresh eggs for breakfast. 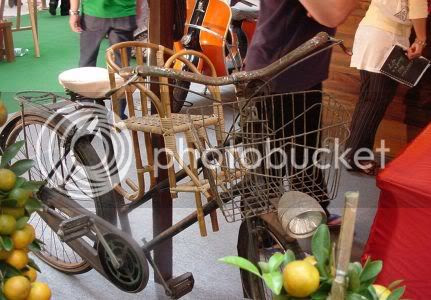 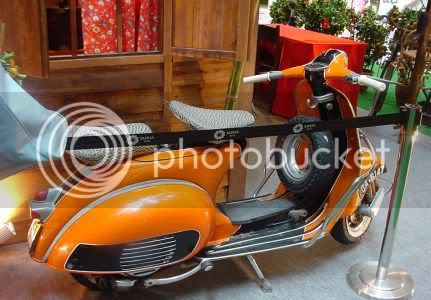 Another popular form of transport during those days is this classic scooter. I love the tangerine orange colour! Very festive and great for riding around so you can look as cool as Gregory Peck and Audrey Hepburn in Roman Holiday. 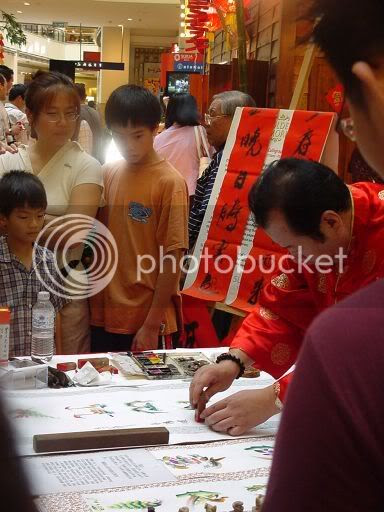 Besides showcasing the house, there are also stalls around the concourse area where you can savour chinese tea the traditional way (in front of the house as seen in the first picture of the wooden house). You can sip your chinese tea to the strains of chinese songs played with chinese instruments. There is also a master that will demonstrate calligraphy paintings that bring good luck and prosperity to you. 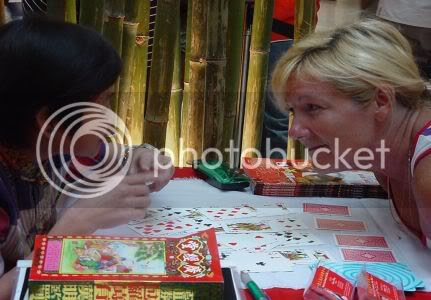 You can also get your fortune told with predictions on what's ahead for you in the Year of the Dog just like this lady who is intently listening to the fortune teller. I hope it's a good year for her. 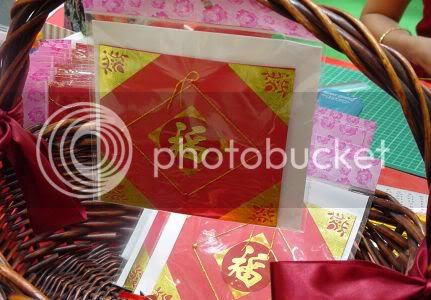 There is a lady making handmade cards and angpow packets if you want something different to give this new year. She also had some adorable Hello Kitty angpow packets for sale too. Incidentally, Suria KLCC is running a promotion where if you spend RM88 on a receipt you can redeem them for two angpow packets. The angpow packets are really nice - long ones so you don't need to fold your new notes and gold in colour with motifs. If you spend more, you will get a pair of chopsticks. 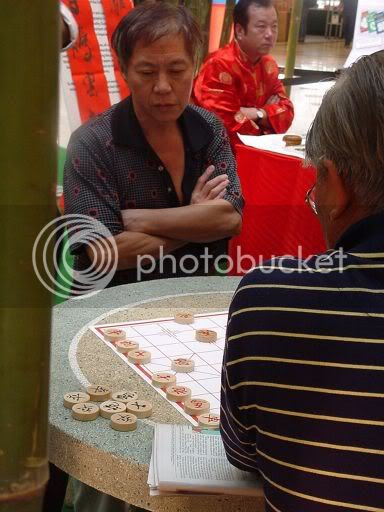 Chinese chess or xiangqi in Chinese was also being played behind bamboo trees on this stone table just like the olden days where they used to play in parks and community centres. This man is concentrating hard on his game to see what is his next move with the hope he can emerge the victor. 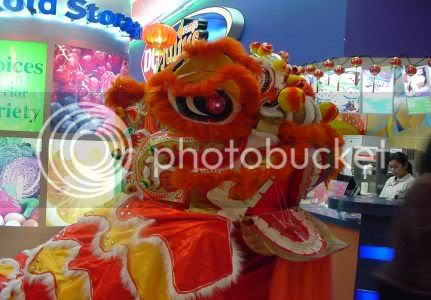 I walked around the Suria KLCC concourse area and found this lion head in full regalia right in front of Cold Storage. I thought I better take a picture of it as it will be extremely difficult to capture it during a lion dance when it will be moving. Most of the shopping centres will be having lion dance performances during the weekend so you can catch the action then. If not, during Chinese New Year there will be lots of performances in private houses or companies. 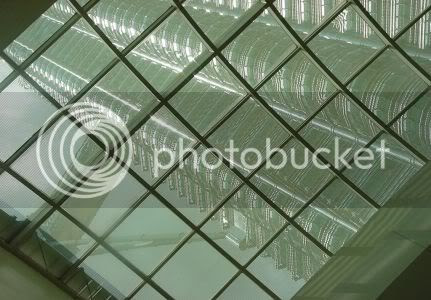 For those who miss the KLCC twin towers, here's a glimpse of it with the skybridge at the 41st floor through the glass roof of Suria KLCC. You can visit the skybridge for free if you register at the KLCC reception but it's advisable to be super early as places are limited. 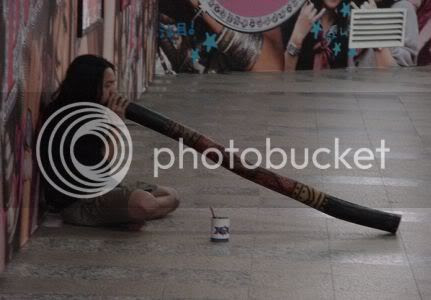 We don't get many buskers in our train stations - just the occasional lot who are always asking for donations so I was surprised to see this fella with his didgeridoo. Maybe he is busking his way towards a ticket out of Kuala Lumpur? Hope he succeeds as I suspect the authorities don't really encourage busking at these areas.

Hope you enjoyed the peek into how a Chinese family traditionally celebrates Chinese New Year and stay tuned for more street action tomorrow.

Update: Tien Soon has posted up her pictures of the house too.

I was there taking watching the Chinese instrumental show at 1PM, and there again at 6.30PM to take pictures haha. Haven't got time to process and post the pictures I took

I didn't manage to catch the show, it ended before I could take pixs! Looking fwd to your pixs.

"Update: Tien Soon has posted up her pictures of the house too."

Haio.. since when I became a "her" le hahah