I have a backlog of entries that I better get moving on or else they'll be sitting in draft form in the edit box. It was just my laziness kicking in plus I wanted to savour my yummy noodles as the front photo for a while more. You know, I had leftovers which I ate slowly and boy, it tastes good even for leftovers. I added loads of the alfafa sprouts which was so yummy with it. 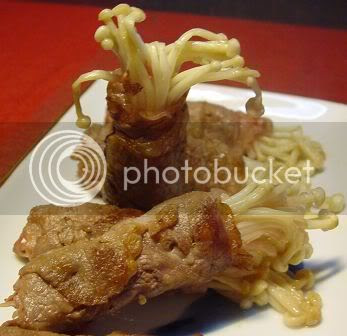 More on what else we ate that night during Chinese New Year eve, I made something I have been meaning to try out - beef rolls with enoki mushrooms. Not very traditional I know but it was something I adapted from my Yummy Yummy magazine. Originally for bacon, I replaced the same with thinly sliced sirloin slices which have been prepared for sukiyaki. You can easily get these from the Japanese supermarkets like Jusco or Isetan. Very simple - just wrap them over the enoki mushroom bundles and pan fry them to be just cooked. Not long as you don't want your beef to be tough. There's also a yummy sauce to go with this which I have not added to the dish above yet but it brings all the flavours together. Very nice stuff and something so simple, I will make it again. 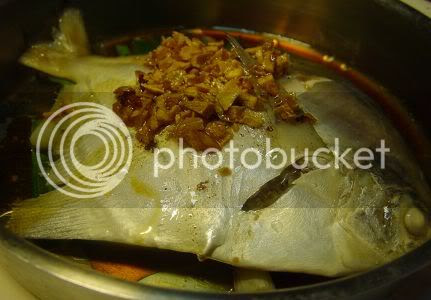 I had to have the obligatory steamed fish for dinner even though Splashie Boy hates fish with bones because of it's significance for Chinese New Year - Nian Nian You Yu which means every year have fish. Hence I bought a teeny weeny white pomfret to steam with spring onions and ginger slices. A little soya sauce was then added with fried garlic oil to the steamed fish and served. 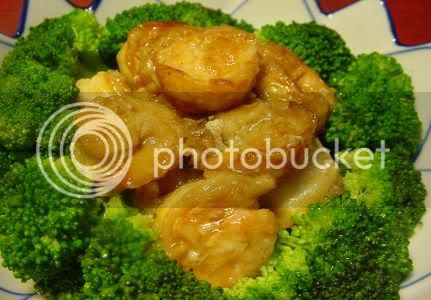 This was a hit with Splashie Boy - prawns with broccolli. The broccoli was just boiled with a dash of oil, sugar and salt to maintain it's green colour. Prawns were marinated in soya sauce, white pepper and sesame oil. It was then tossed with beaten egg white and corn flour before I pan fried them. After I drained the oil from them, I cooked a sauce from chicken stock and poured it over the prawns which were nice and crunchy.
Tagged with: Malaysian Food + Chinese New Year
Posted by boo_licious at 2:50 AM

simple and delish! nice job with the enoki.

I would love to try that beef rolls..They look so yummy.Finding enoki mushrooms will be a challenge

mamabok - do you want the recipe for the sauce? can send to u.

foodcrazee - rememeber I love enoki and will always add it in if I have a choice.

gini - if enoki is a problem, you can use peppers to roll up instead. Not sure where you are in the world as there's no mention in your blog.

arghh u are killing me YOU ARE KLLING ME!!!