Yesterday after a slightly depressing meeting with the contractor where prices seem to be spiraling way beyond our budget, we decided to cheer ourselves up by eating dinner at this newly opened pizza place just opposite the Kelana Jaya LRT station. The place was pretty packed with people which we found out was attending the owner's birthday bash. Things were a bit chaotic as the wait staff were all busy running around the packed restaurant that service was not top-notch. The place is also brand new as it just opened last week. 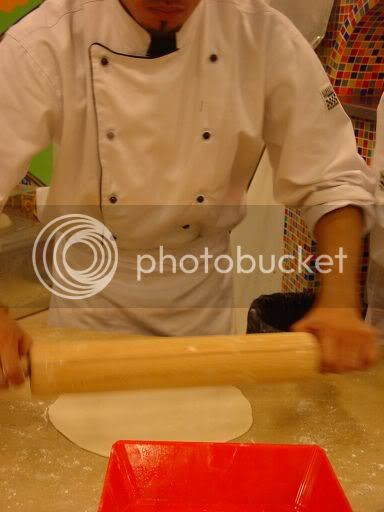 What we liked about this place was their impressive set up for their pizzas. They had a seperate counter within the restaurant area so you can watch your pizza being assembled in front of you and an enormous wood pizza oven. Here I managed to catch the guy rolling out his pizza dough with his wooden rolling pin. After rolling the dough out, he trimmed it a bit to make it a round shape. 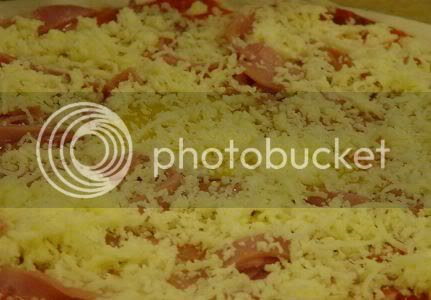 Ingredients are all readily chopped at the side for him to sprinkle on top of the pizza dough. This is their house specialty, the Marco's Pizza which has turkey ham and an egg within that is topped with shredded mozzarella cheese. 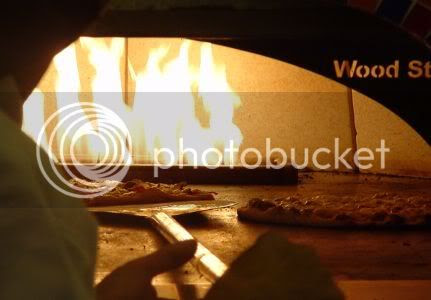 Once it is all assembled, they will use a contraption that reminds me a bit of a garden spade except it's flatter to place it within the oven. I love this picture with their wood oven - it took me a few shots to get it right as they were busy moving in front of the oven preparing the pizzas. 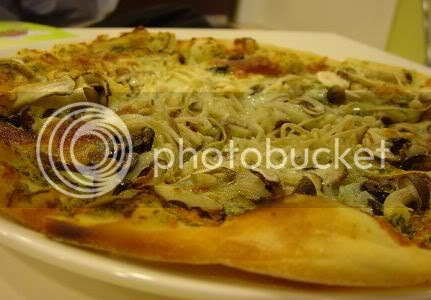 We ordered one of their pizzas, the Con Funghi (RM14+ for the regular) which has a pesto base and is sprinkled with wild mushrooms, pickled onions, sliced black olives and a touch of sea salt. The mushrooms they put on top looked like enoki mushrooms, fresh shitake mushrooms and honshimeji mushrooms. We both liked this pizza as it was really nice and light tasting - no stringy tasteless cheese for this pizza. Besides the usual barbeque chicken, hawaiian pizzas, they also have interesting combinations like the Waldorf Pizza that comes with prawns, kyuri cucumbers and mozarella cheese plus their Marco's Pizza. The pizzas come in two sizes; regular or large and prices range from RM13 to RM28. 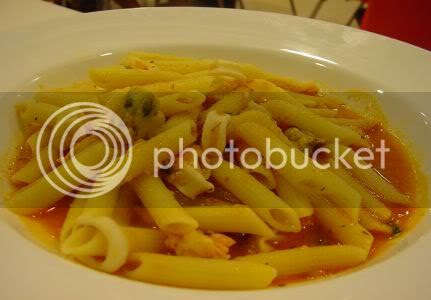 To go with our pizza, we had a pasta dish - the Penne Pescatore (RM16+) that came with seafood and fish broth. The menu described it with green peas and juicy tomatoes which was missing from our portion. It's pretty tasty with the tomato fish broth even though there's not much seafood. Guess I can't really complain as the price of the pasta is way below other pasta joints. The pasta dishes served here range from RM13 to RM16 with bolognaise, carbonara and pesto choices.
They also have a few main entrees - cod, roast chicken and etc. which we saw them serving the next table. The cod was about RM38+ while the other entrees were around RM20 plus or slightly less. Another popular item we kept seeing them bring out of the kitchen was their mushroom soup which is made from wild mushrooms and a bit of grapeseed oil. You get to peek into their kitchen through a glass window and it's quite fun seeing the chefs get busy making the pasta and cooking the main entrees. There is a small Little Tikes playground for kids to play at the side of the pizza oven area. Another thing I better mention - they don't serve ice water here, you will need to get a bottle of mineral water which they charge RM2.50+.
I would definitely come back again to this place as I found their prices reasonable and I liked their pizza. I wasn't too impressed with their pasta and their service though. The service part is a bit difficult to judge since they were too busy from their private function plus they only just started out. Hopefully the next time I go again it would have improved as bad service can really turn me off a place even though food is good. Parking is easy to find at night around this area as this place is packed with offices. If you plan to go during the day, you may find it difficult to get a space so taking the LRT is a better choice or you may have to park at the residential area behind the shops.
Marco's Pizza
No. 81-85, Jalan 25/2
Taman Bukit Emas
47301 Petaling Jaya

Tel No: 03 - 7803 5000
(At the shophouses directly opposite the Kelana Jaya LRT Station. You will need to walk across the pedestrian bridge to get to these shops.)
*Disclaimer: The opinions expressed here is entirely based on my personal tastebuds and may vary for others. The reviewer also declares that she has not received any monetary or non-monetary compensation from the restaurant for writing this review.

New Straits Times have done a review of this place - click on this link for the full write-up.

thanks kampungboycitygal - it's my fav pix too. Hope you'll give it a try.

Would you like to have a food review at Marco's new outlet in Bangsar Village Shopping Centre? Let's set a date as soon as the attendance is more or less confirmed! Don't worry, it's on my Boss! =D