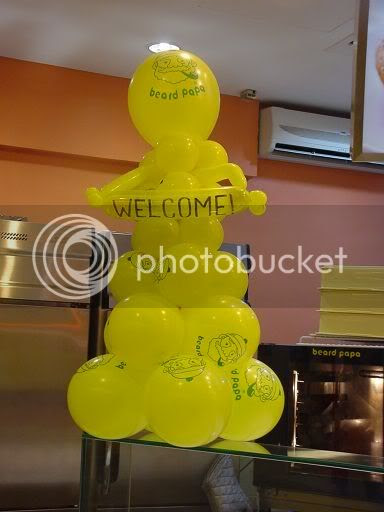 I finally got to sample a bit of the famous Beard Papa cream puffs at Mid Valley Megamall which opened last month. These cream puffs have been creating quite a bit of a stir all over the world as it seems there were long queues for the puffs when it first opened in the USA. No long queues in Malaysia though but business seems to be quite brisk. I guess all they need is some publicity in the papers as I don't think many people are aware of them unless they are major foodies. So far, I have only seen them advertising their arrival in Malaysia in the Japanese papers. 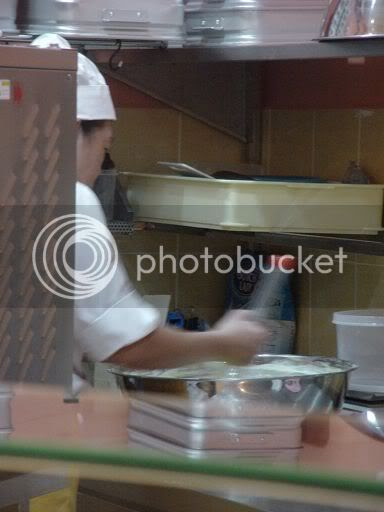 Beard Papa works on a franchise concept and originates from Muginoho, an Osaka based fast food restaurant chain. What makes their puffs unique are a couple of things: firstly it's the filling which is softly whipped cream custard. I managed to catch a picture of one of the workers whipping a batch of the custard behind the counter so I know it is pretty fresh. Can't really see what she added but based on their website, one major ingredient is the Madagascar vanilla beans. 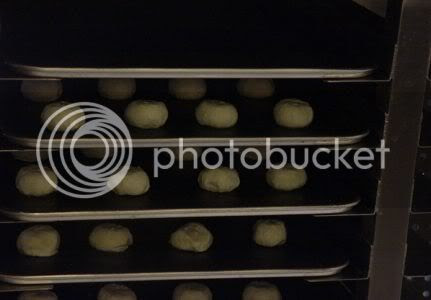 They were also making the choux pastry shells so I caught some pictures of it. It looks like the pastry is made ahead and frozen. They will have trays with the pastry shaped in small rounds near the oven ready to be baked. 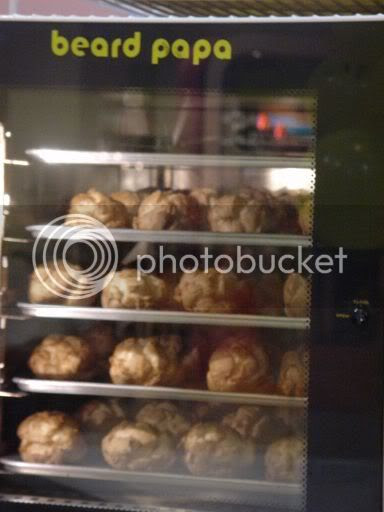 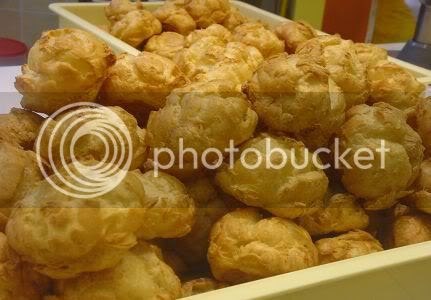 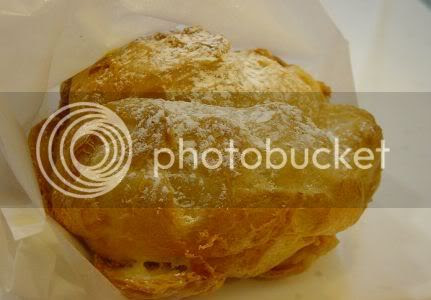 I had one puff which is being sold at RM3.30. You can buy them in multiples of three and five which they will give you a long yellow box to hold them with. Once you order your puff - they will use a metal contraption to poke a hole at the back of the puff to fill it with the whipped cream custard. Icing sugar is then sprinkled on top and it is wrapped in white paper for you to take away to enjoy. 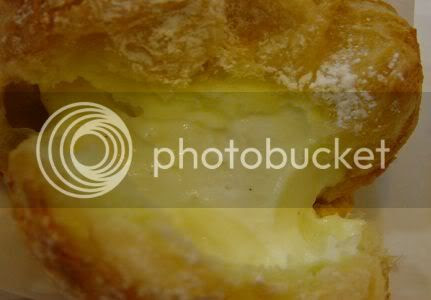 Here is the inside of the puff with the whipped custard filling. See those teeny weeny black dots - that is the Madagascar vanilla beans they use. I found the filling to be nice and soft but you don't really taste the vanilla though. The shell is nice and crisp on the outside and soft inside making it really different from the other cream puffs in town. Usually the filling of the cream puffs we get are pastry cream or custard which is not as soft. The closest I can compare this cream puff with is to Sun Moulin Bakery's Jumbo Puff which comes with a crisp pastry shell and whipped cream piped within it. Unlike Beard Papa, the Jumbo Puff is prepared ahead and kept in a fridge to maintain the cream and crispness of the pastry shell. However I find that they put too much cream vs too little pastry shell hence it can be too rich for me. Beard Papa's proportion of cream filling and pastry shell is just nice and one will not find it too rich but decadent enough to ask for more.
Beard Papa
LG 007
Mid Valley Megamall
(Opposite KFC. Same floor as Jusco Supermarket and Carrefour.)
*Disclaimer: The opinions expressed here is entirely based on my personal tastebuds and may vary for others. The reviewer also declares that she has not received any monetary or non-monetary compensation from the restaurant for writing this review.

Tagged with: Beard Papa + Cream Puff
Posted by boo_licious at 6:00 AM

my sister and i just caught a glimpse of the signage when the store first opened and we didn't even know anything about it, just commenting on the silly name haha. but now that you in babe have well written about it, guess i will have to try it one of these days...! ;-)

Glad that you will be trying it out q! Let me know if you like it.

call me a cheapskate lah, but RM3.30 per choux puff is really quite ex you know?

babe blogged it, boo blogged it, so I am going to make sure that I grab some these few days. But RM3 x 6 of us = RM18! Never mind, i share share with my kids

Yeah I tried it too, unsuprisingly as I'm a foodie too, didn't blog about it though.

I didn't find it anything special, it's definately better than the crap Choux buns outside 1U Jusco, but still I found it overpriced and surprisingly average.

yea the price is crazy but its not too bad actually. i like that its kinda warm on the crisp but cold on the custard.

wow... I love custanrd puff things. I had one type of bun thing filled with custard when I was in Japan. It was SOOOOO good. Been craving for it since. I hope papa beard tastes like that too. Can't wait to try it!

i tried it once in takashimaya singapore and fell in love with the cold creamy filling..was delighted to find out that they've opened up at midvalley..

The cream filling is so tempting..SO far the best cream puff that i've ever eaten is from Sun Moulin KLCC..Gotta try out beard papa's someday

minishorts - Yes, I do think it's a tad bit pricy but it's a one off indulgence. I wouldn't want it too cheap either then I will be eating too many of it and growing fat!

5xmom - hope you and the kids enjoy it, prerequisite is you must love cream.

shaolin tiger - I found it pretty nice since it's crispy on the outside unlike the other cream puffs you get in KL. I agree on the price though - a bit high.

mamabok - glad you liked it. I remember eating it in Spore and it was also quite pricey there. Re-reading memoirs of the geisha before the movie reaches KL as I read it years ago.

rokh - hmmmm, mine was not that warm but the custard was a bit cold. Sounds nice if it's hot.

lin - Hope it's the same as the one in Japan. If not, try Sun Moulin Bakery in KLCC next to Isetan as they also do decent cream puffs.

praveen - glad to hear you are also a fan.

kampungboycitygal - I love the puffs in Sun Moulin, in fact I am a huge fan of their stuff. These puffs are slightly different though so I hope you'll enjoy them.