We have not been frequenting the malls during the Christmas period as they have been jam packed with people doing last minute shopping but we did manage to get into Ikea on Christmas eve evening as we wanted to check out their kitchen accesories. Originally, the intention was to eat at Fasta Pasta at the adjoining Ikano Power Centre but the queue for a table was quite horrendous so we took the easy way out and tried the newly opened Absolute Thai. This Thai restaurant is part of the chain of restaurants that you will come across in almost every shopping centre in town and is run by Sea Cuisine Sdn. Bhd.. They boast similar dishes and decor at almost every outlet with their modern furniture and large mirror in the wall. Lighting wasn't too brilliant at the restaurant - down lights is no match for fluorescent lights during night time photography so the photos aren't perfect. 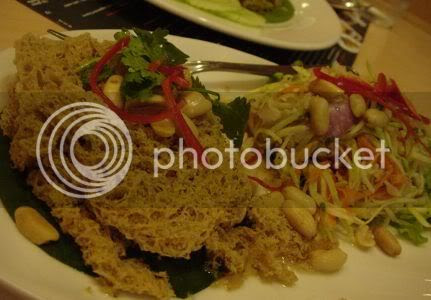 We ordered an appetiser to share and decided to try their deep fried catfish and mango salad. I thought this was not too bad and the salad was pretty tasty too. 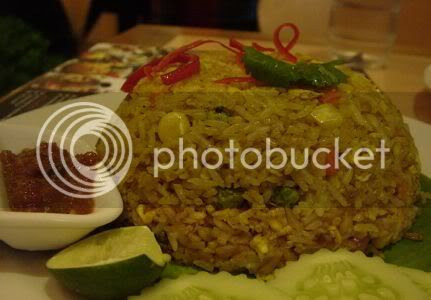 Nothing could deter Splashie Boy from ordering his favourite Pineapple Fried Rice even though I pointed out that he only seems to eat this all the time. It did not come in a carved out pineapple (so sad!) so it didn't look too impressive. We compared it to Basil Thai Nudle which is also in their chain and it fell short according to Splashie Boy. 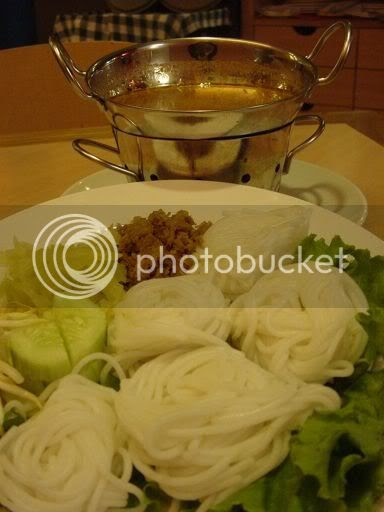 I ordered the Laksa as I love the white thin noodles that they serve it with. It came presented in a very interesting manner - the laksa sauce will be in a metal bowl that was placed over a portable burner with a platter of the noodles, chopped vegetables: long beans, cucumbers and condiments like chopped turnip (choy poh in chinese) and pickled cabbage. You are given a seperate bowl for you to mix the noodles, vegetables and condiments, laksa sauce according to the portions you like. At first when it came, the little fire at the burner was not lit hence my laksa sauce was cold. I had to wave to the wait staff to re-lit it so my laksa sauce was nice and hot. It was an interesting way to eat laksa as my sauce remained boiling hot but somehow I found the sauce a bit too pungent with fish sauce to say it was perfect.
Overall, I found this Thai outlet's food standards a shade paler than the rest of the restaurants in their chain. Not too sure whether it was due to the Christmas rush but somehow the food here just didn't taste as nice as Basil. They better buck up or else they will share the same fate as Red Herring which used to occupy the space previously.
Absolute Thai
G-20, Ground Floor
Ikano Power Centre
Mutiara Damansara
Kuala Lumpur
Tel No: 03 - 7729 8708
*Disclaimer: The opinions expressed here is entirely based on my personal tastebuds and may vary for others. The reviewer also declares that she has not received any monetary or non-monetary compensation from the restaurant for writing this review.

Tagged with: Thai Food + Ikano Power Centre
Posted by boo_licious at 3:25 AM

Thanks for the review, boo.

I had lunch with my friends at Just Thai, 1 Utama once. We ordered the deep fried catfish & mango salad for appetiser, and I have to say I was disappointed. I can't recall what we ordered for main and desserts. It was that bad! Rain Nudle House's dishes were nothing to shout about. Good thing they closed & glad Little Penang occupied the space.

Being a half-Thai and Thai food lover, I've yet to find a good Thai restaurant in Malaysia. Will have to keep looking.

I was at Paddington Pancake, The Curve yesterday noon! The mall was real quiet. Will blog about it later.

They are of the same mgmt and nothing to shout abt actually. Maybe i spoilt my tastebud with my Thai chef around here.

what an unusual way to serve laksa - but at times, I think DIY is a 'cop-out' for restaurants, and I'm not keen as I'm never sure whether I've put in the right amounts of each of the ingredients to get the best taste out of the dish :0

skyjuice - I think Little Penang is a worthwhile replacement. During lunch time, there is a queue to get in. So sad abt no nice Thai food!

Lilian - really? Must read your blog to see if you liked it.

foodcrazee - you are so lucky!

Cath - hmmmm, kinda true that it's difficult to gauge the portions. For me I just add lots of the laksa broth.

Ah hah ... found an old blog of yours from the archives of time! I too just went to this Thai @ The Curve ... sigh, not impressive is it?

Have a good day!