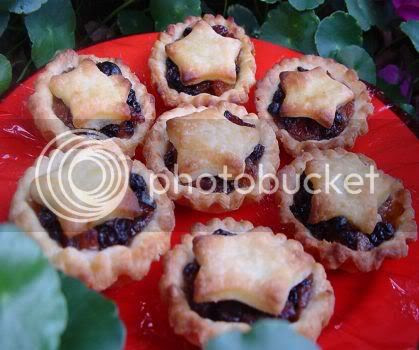 I am in Christmas mode already hence I recently tried my hand in making some mince pies instead of forking out money to buy some. I got my act together pretty early and although I did not make my own mincemeat (which contrary to it's name does not have any meat inside it but is sweet and made from dried fruits) but I managed to get some excellent home made mincemeat from the British Women's Association Christmas Fair which came soaked in brandy and is nut free. If you wish to get some mincemeat to make these pies, I thoroughly recommend Marks and Spencers Luxury Mincemeat that is selling in their outlets. (If you don't want to spend the effort to make these pies, you can buy them from Marks and Spencers. The shipment for mince pies is due anytime this week)
Usually mince pies is all covered up but I opted for a newer version that is tiny and is topped with a pastry star to give it a festive look. Inspiration for these teeny weeny pies are from Nigella Lawson's Feast (it also appears in How to be a Domestic Goddess). Handling the pastry in our tropical weather was a bit of a problem but whenever I felt it melting on me, I will put it inside the fridge to chill before working on it. My mince pies came up a bit crispy as I think I left them in the oven for too long. Usually the mincemeat is sweet but the home made one I have complemented the tarts really well as it was not overly sweet. As I have left over mincemeat, I will probably try Nigella's Frangipane Mincepies which I heard is also excellent with ground almonds.
Star-topped Mince Pies

Measure the flour out into a shallow bowl or a dish and using a teaspoon, dollop in little mounds of vegetable shortening, add the butter, diced small, shake to cover and put in the deep freeze for 20 minutes. Mix the orange juice and salt and leave in the fridge to chill.

Empty out the flour and fat into the bowl of a food processor and blitz until you've got a pale pile of porridge-like crumbs. Add the salted juice through the funnel, pulsing till it looks as though the dough is about to cohere; you want to stop just before it does (even if some orange juice is left) If all your juice is used up, use ice water. Turn out from the processor and in your hands, combine to a dough. Then form three balls (since you will be making three batches unless you have enough tins to make all 36 pies at once) Press each ball down into a fat disc and wrap each in clingfilm and put in the fridge to rest for 20 minutes. Preheat oven to gas mark 7/220C.

Roll out discs one at a time as thinly as you can without exaggerating; in other words you want a light pastry case but one sturdy enough to support the dense mincemeat. This is a very easy going dough, so you don't have to pander to it; just get rolling and patch up as and when you need. Out of each rolled out disc in front of you, cut out circles a little wider than the indentations in the trays. Press these circles gently into the moulds and dollop a scant teaspoon of mincemeat. Then cut out your stars - re-rolling the pastry as necessary - and place them lightly on top of the mincemeat.

If you want to glaze the mince pies, then brush stars with a pastry brush dipped into the egg and water mix. (This depends on if you want it pale or matt or gold and shiny) Put in the oven and bake for 10-15 minutes; keep an eye on them as they really don't take too long and ovens do vary. Remove from the oven, prising out the little pies straight away and letting the empty tin cool down before you put in pastry for the new batch. Carry on until they're all done. Dust over some icing sugar by pushing through a tea strainer before serving them.
Tagged with: Mince Pies + Nigella Lawson
Posted by boo_licious at 8:58 AM

That looks good! I saw this recipe in Nigella's book and thought they looked very Christams-y...glad to see it tested! :) Maybe I shall try it...if I can get any mincemeat around these parts! :)

chicajo - I was searching for someone who had tested it but a lot of people say yes we tested it on nigella's forums but not much details. Think the frangipane mince pies seems to be more popular.

Boo,
So cute! Such darling little pies! The colour of the photo, green and read really creates a festive kind of effect to it. Nice.

rabbit - hee hee! That was the idea behind it. Smart girl to notice the colours.

looking really festive! wish i can have that in a christmas party!

rokh - I know! Looking at them makes me realise Xmas is just round the corner.

hi, personally I'm not quite into them as I find them a little too sweet for me, but your mince pies look very good!

cath - yeah a lot of people say that but this mince is not that sweet. I guess when it's home made it's much nicer.