I had blogged earlier on about RakuZen Japanese Restaurant when we ate at their Subang Jaya outlet which is one of my favourite places for Japanese food. When I read in a Japanese newsletter (there is always a free one around with advertisements) that they will be opening an outlet in Sri Hartamas starting from December, I was jumping up and down with joy since that will mean it is pretty near my place. There was only one small problem, I could not read the advertisement since it was all in Japanese but I solved the little mystery of where it was by calling up their Subang Jaya outlet. It's tucked away in a little corner at Hartamas Shopping Centre that if you didn't know about it, you would not have discovered it.

We finally made it to the place after giving it the usual grace period of a few weeks to let it iron out any opening hiccups. The place has a great modern feel about it and I suspect they may have used the same award winning Japanese design house that did their Chulan Square outlet. Our table was so nice and cosy - it felt like we were in a private club with plush seats. I loved the way they used this wooden divider to seperate the booths from the sushi counter. There are two entrances to the restaurant: one from the shopping centre which had some strange looking door knobs and the other one from Plaza Damas which has a nice big white lantern and a lovely wooden designed door. I didn't really get to see the whole place but I plan to explore it further. 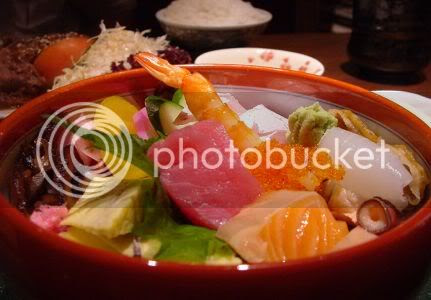 On to the food, we were feeling pretty tired that night as it was quite late by the time we sat down for dinner so we just chose their dinner sets quickly. I had their Sakura Chirashi Don which is similar to what I had the last time, raw sashimi slices on top of sushi rice sprinkled with shreds of nori seaweed. The selection of fish is a bit different though: hotate (oysters), salmon, maguro(tuna), ebi (prawn), ebiko(fish roe), tamago (omelette), octopus, cuttlefish, seabass, sliced mushrooms and sliced cucumbers. The portion was pretty big and so yummy, I shamelessly finished it all. 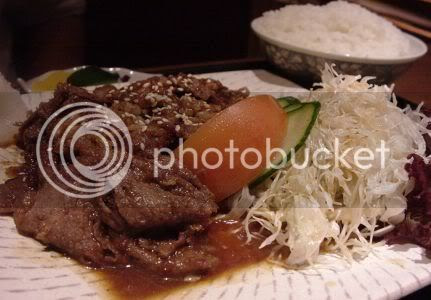 Splashie Boy had the Yakiniku Zen which was thin slices of beef that have been grilled. I stole a piece from his plate and it's really yummy as the beef is so tender and full of flavours. Both of our dinner sets came with a bowl of miso soup with tofu cubes, shimeji mushrooms and seaweed, chawan mushi (steamed egg) and a selection of cut fruits. 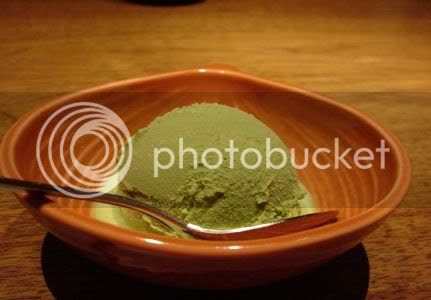 We were also given a scoop of Matcha ice-cream, compliments from the restaurant to celebrate their opening. I thoroughly enjoyed the food here and will definitely come back again since it's within the neighbourhood.
RakuZen Japanese Restaurant
Lot P17, Plaza Ground Floor
Hartamas Shopping Centre
60, Jalan Sri Hartamas 1
50480 Kuala Lumpur

Tel No: 03 - 6201 2060
(If you come from Plaza Damas, it is opposite the Wow Wow Cafe, at the end of the street. If you are coming from Hartamas Shopping Centre's main entrance i.e. street level, take the escalators to the top floor, turn right and walk to the end of the shopping centre past Times Bookshop)
*Disclaimer: The opinions expressed here is entirely based on my personal tastebuds and may vary for others. The reviewer also declares that she has not received any monetary or non-monetary compensation from the restaurant for writing this review.

Tagged with: Japanese food + Rakuzen + Sri Hartamas
Posted by boo_licious at 3:15 AM

ooo, that ice cream looks so green and yummy. Cravings are kicking in ;)

michele - the ice cream was so yummy. Nice touch to a lovely meal.

by the way, I believe that hotate is Japanese for scallop, not oyster :)

Boo,
Oh my! I'm just crazy over Japanese food. The chirashi don looks extremely good. Feel so tempted! Thanks for the great photos.

hey "boo_licious", i would like to ask, when was that time when you dine in rakuzen @ damansara? you have stated that, you received a complimentary ice cream due to their grand opening. so i assume they have just opened not long after you visit them a month later. i needed to know because i am planning a birthday dinner for my sweetheart at rakuzen damansara, and i'm afraid if that restaurant has been long established, my sweetheart would have tried before. i want to make it special for my sweetheart for not bringing her to the restaurant that she has been to before =) i could have directly ask her about it, but then, there wouldn't be any suprises anymore right? haha. my e-mail add is, "shammeonu@yahoo.com". hope to hear from you soon. thanks!

This restaurant has KL's best hot Inaniwa. It's slightly dear but it's well worth it. Have it alongside some Ebi Tempura or even the Saba Shuyaki.
Another must try is the Dragon Roll.

Hi boo_licious,
Kindly be informed that this post has been reprinted on JoinMe.com.my, thanks. ^^
P/S: We have put your name and link credit back to this article.