Every year without fail, I will know Chinese New Year is just around the corner with the sale of McDonalds' Prosperity Burger. This year, they started selling the burger on 23 December, which was pretty appropriate since it was just one day after Dong Zhi which is signifies that it's time to start preparing for the festive season. 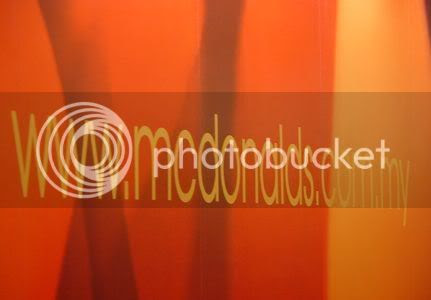 I actually took this picture advertising the local website sometime back for a McDonalds' round-up that Sweetnicks had before. If you're a McDonalds' fan, you can click on the web address and get lots of information on the fast food. If you also get shortchanged in a McDonalds, you can even complain to their customer service which is pretty efficient. Now if you are an avid fan of McDonalds like Splashie Boy (a visit once a week is essential for him!) they will even present to you a free Privilege Card that gives you a 10% discount on all meals served in McDonalds. 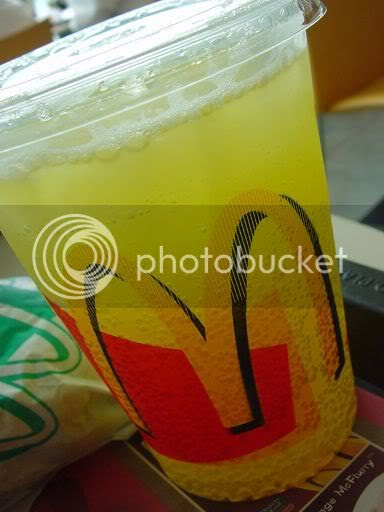 The Prosperity Burger comes in a set which has two sizes, medium or large that consists of a drink called Orange McFizz, Twister Fries and the burger. The drink is just a fizzy orange drink that was not too sweet but tasted a bit diluted compared to the Mirinda Orange drinks. 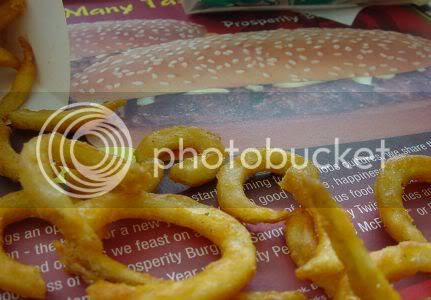 I was playing with my Twister Fries and decided to take them on top of the paper they line the tray with so you can see what the Prosperity Burger looks like in their promotional pictures. The fries are my favourites with their crunchy coating. 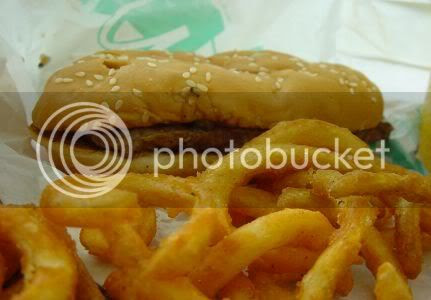 This is my Prosperity Burger with my Twister Fries - big difference between the promotion picture and real life. I wanted to take the top of my bun off and show the middle bit of the beef fillet slathered with the black pepper sauce but the bun was a bit too soft from the steam of the beef patty. I even ended up making a hole on my bun.
The Chicken version will be sold in Kuala Lumpur from 12 January, 2006 onwards based on their leaflets. Not sure why but they have already started selling the chicken version in Kuching as per Sixth Seal but he got a bit of a raw deal as they forgot to slather black pepper sauce on his fillet.
Incidentally I had this at KLCC's food court and I saw someone else also taking a picture of his friend's burger in the next table. Looks like there is a lot of people taking pictures of their food at that place. (It's my second time seeing people snap their food there) Besides the meal, they also have prosperity desserts which are Orange and Peach sundae and a peach orange McFlurry. The sundae is essentially soft vanilla ice cream topped with an orange sauce, orange segments and diced canned peaches while the McFlurry has all of the above ingredients blended together.
So do remember to eat at least one meal of Prosperity Burger this year as it's a once a year special that will hopefully bring you lots of luck and prosperity for the new year. Don't eat too much of it though or else your stomach will definitely "prosper"! (In Chinese, you usually tell someone you look so prosperous when they have put on weight)

Tagged with: McDonalds + Prosperity Burger
Posted by boo_licious at 3:30 AM

Just another fun thing our own McDonalds' doesn't have over here...

oh good the Prosperity Burger is back! I missed it. Then again if u get it the whole year round, it might not be so popular anymore.. ;)

yesh, prosperity is back! Had one a few days back.
flower, i like the beef better than the chicken too. But do they still sell the chicken one??

hope they bring this burger into Singapore as well :)

sweetnicks - Yeah, this is one of the localised McDs burgers that I love.

flower - bug McDs customer service in Perth and maybe they will bring it in?

jesscet - yes, once a year offer so everyone will be eating it.

elly - they will start selling the chicken one next year.

Cath - do they have it every year? I love McDs in Spore as you get the hotcakes for breakfast.

Saw the ads on TV a few days ago, and told my sister we must have it soon. The prosperity burger is the only thing that I eat from McD's (I hardly take junk food, and I can't remember the last time I went to McD's!). I live up north currently, and the nearest McD's is about 45 mins drive away. I think I'll call McDelivery and see if they could deliver to my home.

skyjuice - I hope you enjoy it.

prosperity burger is a must every year! else something is missing.

oh ya do you know, i heard that this burger was invented in malaysia!

"Not sure why but they have already started selling the chicken version in Kuching as per Sixth Seal but he got a bit of a raw deal as they forgot to slather black pepper sauce on his fillet."

Actually, I believe that the black pepper sauce was there on his patty. If you look carefully you can see peppercorns!

Just a question. When was MCDonalds started to sell prosperity burger?

Unknown said...
This comment has been removed by the author.
8:44 AM