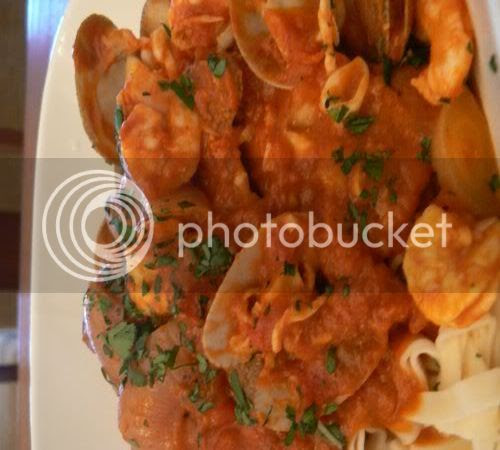 During the festive season, I did quite a lot of cooking which gave me the opportunity to experiment. I confess, I've always had some problems with the basic tomato sauce for pasta as I find it lacks the extra oomph! like the ones you get in the restaurant. My sauce always has a sour taste to it which I kinda hate.
In response to my queries, a friend of mine introduced me to Marcella Hazan's cookbooks and the wonders of her famous tomato sauce. It's something not new as her cookbooks have been around for years but after giving it a try, I feel as though I have found epiphany in my pasta sauce making. The best test of course was my friends' responses and the simple tomato sauce was a hit at a recent dinner party at my friend's house. Everyone asked for the recipe hence I have decided to write it up here rather than emailing all of them plus sharing it with all of you.
Although the pricing of this sauce is quite expensive versus buying an instant pasta sauce, it's kinda worth it as you know what goes in to the sauce and it does not have any preservatives. For my version, I used canned Italian plum tomatoes (Cirio is my favourite) plus my usual Lurpak unsalted butter. Even though Marcella Hazan does say you have to throw away the onion once you use it, I've found that it's nice to eat it together with the sauce. For my pasta in the picture, I have added a mix of seafood like clams, calamari and prawns which I sauteed seperately before adding the sauce.
On a cooking note, if you love cook shows, do check out Astro's new channel, BBC Entertainment on channel 26. There's a variety of shows such as Friends for Dinner, James Martin's Sweets, Delia Smith's How to Cook, Ching's Kitchen, Rick Stein's Fruits of the Sea and Giorgio Locatelli Pure Italian which they're showing. It's at odd times but if you love British chefs, it's a good opportunity to catch them in action before Astro start charging for the channel from May 2007. To check the schedules, see Astro's website for details.
Marcella Hazan's Tomato Sauce with Onion and Butter
(Extracted from Essentials of Classic Italian Cooking)
2 cups canned Italian plum tomatoes, cut up with their juice
5 tablespoons butter
1 medium onion, peeled and cut in half
Salt

Put canned tomatoes in saucepan, add butter, onion and salt and cook uncovered at a slow and steady simmer for 45 minutes or until fat floats from tomato. Stir from time to time, mashing any large piece of tomato in pan with a wooden spoon. Taste and correct for salt. Discard onion and serve sauce with pasta. This recipe makes six servings.
Other raves about this recipe:

And I will be the first to leave a comment...it's good to live in Europe ;-) I really love your blog, the pictures and the descriptions you made of all this restaurant !!!! Great job ;-)

Have a nice day!
Claude
P.S I have added your blog addresse on mine!

Thx for sharing the cooking tips of tomato sauce. Now only i know i need to simmer the tomato sauce for 45 minutes. No wonder everytime i can't get the perfect taste.

Sounds like a great and simple recipe, definitely worth a try!

I sometimes add a small amount of sugar to offset the sour taste in my tomato sauces, don't know if you've tried that.

Like claude-olivier above, I've also added you to my blog.

wow, delia's on? aiyo, you mean eventually channel 26 have to pay ah? bummer.

Hi boo_licious, like shilpa, I like adding sugar as well with some basil, parsley, & oregano flakes occasionally for that extra taste bud. Somehow I find canned tomatoes a tad sour vs. using canned tomato puree, and then add fresh diced roma tomatoes (sweet) & regular tomatoes. Btw, I had the same problem here tryinig out different sauces and find that Prego is simply the best of choice. Is that costly in M'sia ? Don't leave out your parmesan & romano cheese, can't be complete without them, now ya ?

Btw, I enjoyed your extensive listings of eats, which allows me to be picky when I'm at home, cheers ! :)

claude olivier - thxs for the link and I'm glad you enjoy the blog. Stick around this year for more good eats.

jackson - give it a try, the sauce is really good.

whistler - I think if you open the instant stuff it's like a cop out esp if you know you can make this great stuff in 45 mins.

tummythoz - you probably can use ordinary salted butter (I haven't tried as all I use is Lurpak for my baking) but do adjust the salt levels.

pille - it is! I was so surprised at how simple and good it tasted.

shilpa - yeah, I used to do that too but in this recipe, the butter is the element which gives it the sweetness. Thxs so much for adding me in yr links!

fatboybakes - nothing is free on astro! Yup, the great delia. Definitely worthwhile to catch as she'll teach the basics.

melting wok - The butter gives it the sweet taste so you don't need to add sugar. If you use Cirio canned tomatoes combined with butter, no sour taste. I haven't experimented with fresh tomatoes as the ones we get in Malaysia are not sun ripened so they taste sour. Prego is not too expensive here but I find it too rich tasting. This has a lighter but sweeter taste. Hope you get home and enjoy all those eats.

I have that cookbook, too, and I've loved everything I've made from it. I just love Marcella Hazan, period. Her recipe for vegetable soup has become a part of my very being! I vary it, of course, but the method is just so good.

Your pasta looks so delicious. All that seafood -- I'm drooling.

luckily i had the presence of mind to cut and paste my comments into word. say, how do i log on if i havent already, when wanting to comment on your blog? somehow i always get into trouble. anyway, my comment was :

hmm, tonixe, you got me thinking hor...apart from sweet sour pork, (which is probably not pure chinese), i cant think of a single other dish with tomato hor!!!! extended asian...hmm, scratch chin, indian...no, malay..no, japanese...oooh, got lah, in those bento boxes, in the salads...indonesian...hmm, no, thai..ah, in tom yam, sure got!!!

oh dear boo, i hope this manglish doesnt put your foreign readers off. must endeavour to post my missives with proper grammar in the future.

ooh oh... pasta.. we haven't done that yet. You'd better recommend somewhere to the gang (..and NOT anywhere in KLCC coz they're not that good and pricey!)

Regarding our weekly WCB event, I also don't know who should host it... Sorry!

wow thanks for the simple recipe. i still have a can of Cirio in my larder to try this out. if i use local tomatoes, usually i'll have to add in some sugar to balance the taste. my mom taught me this when she cooks sweet and sauce dishes.

Actually fatboy, a number of traditional Malay dishes from Johor like the Mustik Udang and Ayam Masak Merah, does indeed use tomato and tomato puree in the recipes ;)

I cook a similar pasta here on weekday nights after work, but I usually cheat with a ready-made sauce. I have never tried making the sauce from scratch. Thanks for the recipe!

lisa - yeah, Marcella's methods are really good and I love the way how she explains everything. Will try the vegetable soup too as it sounds delicious.

tonixe - not really, there's Nasi Tomato and in Indian food, they use tomatoes in their curries. Chinese use it too, I love egg fried with tomato and etc.

ckutu - hmmm, there's one place we tried in TTDI called Porto Romano which is good, they have a branch in City Square, give that a try as their tomato sauce tastes like this one.

rosa - thxs! I guess will have to wait and see where it has gone before I start posting WCB.

babe - hope u like it. Balance out the sweet with the salt and you will get a great sauce.

izad - thxs for the pointers on the use of tomatoes.

rasa malaysia - hope you like it. I loved it and was really surprised everyone else liked it when we went for the dinner party.

izad, thanks for the enlightenment. yes, yes, and of course we have nasi tomato too...how could i forget that!!! i love it. boo, where to get nice nasi tomato? (not made out of tomato sauc)

sorry, no idea where to get nice nasi tomato as usually only eat it during parties or from the ramadan bazaar.

hi Boo, thx for the butter tip & the tomatoes info. :) We tend to take advantage with the tomatoes here as it is so easily available.
Cheers ! :)

I am like an evangelist for this sauce myself. I make it for friends/family all the time, not sure why I think it's my mission in life to get everyone to eat it! The other Marcella recipe I feel the same way about it her Roasted Chicken (also in the Essentials cookbook). I make it/love it so much I created an iPod-downloadable version of it - http://www.mogopop.com/channel/2 - hope you'll try it sometime, so so simple and lovely and delish!

This is one of my favorite sauce recipes! I also use it to make an easy appetizer: Place this sauce and a block of goat's cheese in a smallish shallow dish, bake at 300 degrees (f) for 30 minutes--sprinkle with chopped fresh basil and serve with rounds of toasted French bread. It's basically a goat cheese pizza app, but delicious and looks lovely!