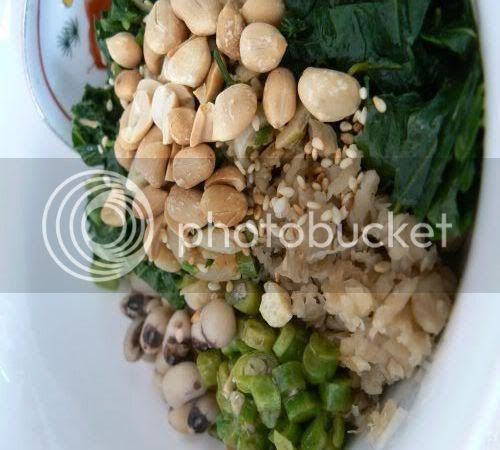 I thought this would be an excellent time to re-introduce all of you to the healthy wonders of Lui Cha or their interesting moniker, Thunder Tea Rice. I'm sure lots of people are groaning from the excesses of the festive season or has come up with a long list of New Year resolutions of which one is to lose weight so this health food is extremely ideal.

Unlike the posher Ecogreen version featured in my previous post( click on the link above), this version is from a stall we discovered at SS2 which we usually visit for their wantan mee and sui kau. The ingredients are all piled on top of the white rice and consists of chopped long beans, preserved radish, sesame seeds, peanuts, black eyed peas, mustard greens, chopped onions, cubes of tau kwa with dried prawns and etc. Although it's not strictly vegetarian, it's a healthy mix as you end up eating lots of vegetables. 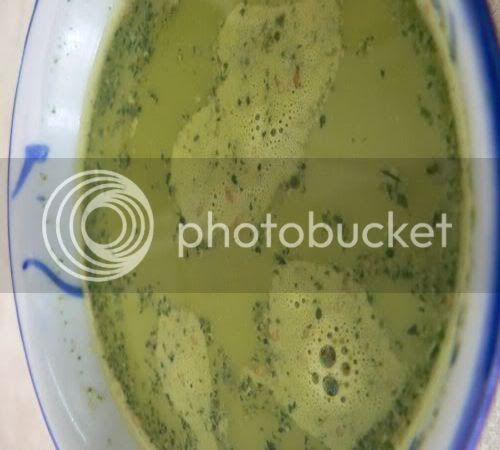 You mix in the broth which is made from mint leaves, green tea leaves and basil which gives it flavour. Unlike the Ecogreen version, the broth is not as bitter hence it makes it more palatable for those who have never tried this dish before. Even though it's just vegetables, it's a substantial meal on it's own and excellent value for below RM4.

Besides this healthy treat, the stall also serves home made porridge with simple flavours like peanuts which are also tasty. The stall owner is new to the area as they just came down from Ipoh a few months back to open this stall hence he's really chatty whenever you buy anything from him. Do give it a try as this is one of my favourite places to get a healthy kick in my system especially after a weekend of indulging.

The stall opens from the morning till lunch time daily. Besides this stall, there's also the wantan mee stall which serves pretty good sui kau. At night, this stall serves Teochew Stewed Duck which is famous in Petaling Jaya. This is within the vicinity of the Lim Mee Yoke, Kayu Nasi Kandar area.

Tagged with: Lui Cha
Posted by boo_licious at 9:15 AM

the only time i've tried lui cha is when my aunt cooks it :). but she serves with rice puffs (is it called mai pang?) rather than white rice. sounds good, will pop over to try it soon

never try this place before, thanks for da info! i am not sure if you been to da one somewhere around Kepong.. i am not too sure which part of Kepong but i'd been there once and they serves authentic hakka dishes with lui cha as their speciality, pretty good though!

this looks good. i will definitely go one day to try it... am a huge fan of lui cha and am constantly looking out for authentic versions. :)

I've never seen such thing before..

I have been patronising Restoran Tian Yew at 15-1, Jalan Puteri 7/9, Bandar Puteri in Puchong (Tel No 8060 9331). It's one of the best I have tasted and an excellent deal at RM5.00 per bowl with lots of vegetables. The restaurant is air-conditioned with Astro for entertainment. Very hygenic place and in the way they prepare their food. Other Hakka dishes are also available. They are closed on Mondays.

sc - wow, lucky you as none of my Hakka aunties cook this though.

meiyen - yeah, the Kepong stall is really famous but I am not familiar with that area though.

jasmine - go try, my friends like this one as they had to eat here one day when Ecogreen did not get theirs ready for lunchtime.

angie - sorry, not tasted jamu but it tastes like lots of vegetables and rice in a slightly warm broth. Lots of sesame seeds, peanuts and etc to give it crunch.

ping - why don't you hunt it out and put it in yr blog with the address? That'll be easier since not so familiar with yr area.

bahibhyap - I've heard abt that place. It was featured in the Chinese papers recently. Since I have the map to that place, been meaning to go try it out.

haha..well..okie..i'll consider it...coz it's been a long time i nv eat there ady..so mayb will blog it..when i visit there ya!hahaha...

gosh, my comment must have gotten lost, as i dont see it here. this new blogger is driving me nuts.

wow, i've only ever had this twice, but always people buy for me, so i never thought of actually going looking for it. thanks for the pointers on where to get.