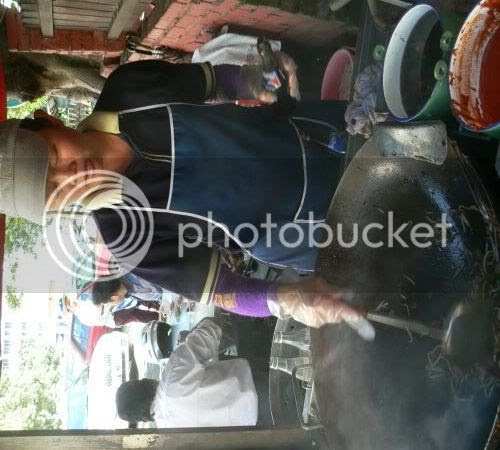 Continuing my exploration of the stalls behind Yut Kee, I took Babe in the City - KL's suggestion to try the Char Kuey Teow. The stall is manned by a father daughter team but the daughter is the one who's doing the frying at the huge cast iron wok.
It's interesting to observe the whole frying process which was easy since I sat at a table near their stall. She's got all the ingredients laid around the wok for easy access: chopped garlic, chilli sauce in one green pot, eggs, bean sprouts in a metal container next to her and etc. If you see the green pot just above the chilli sauce, beneath the murky darkness lies decadent fried lard pieces which is added into the char kuey teow for oomph! One little technique I observed her using was her continued shaking and holding recycled Pepsi glass bottles containing her seasonings - dark soy sauce or light soy sauce. If not in use, they're hung right in front of the wok for easy access. As the wok is deep and huge, she uses a big, flat and wide steel spatula to spoon the fried char kuey teow into plates. 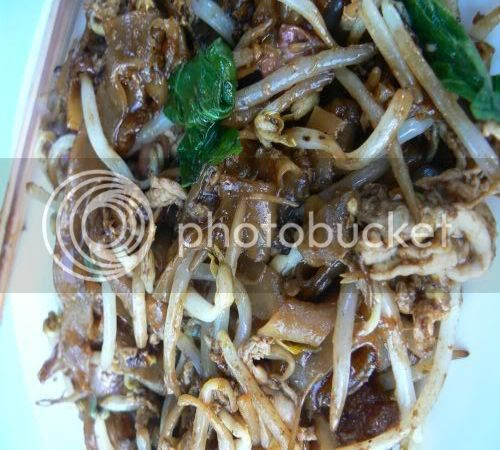 Tastewise, my char kuey teow (RM3.50) was yummy and since it was the Kuala Lumpur version, this type uses more dark soy sauce and is not as dry compared to the Penang style. There's a generous portion of bean sprouts mixed with egg plus my barely cooked cockles. Nestled in between the dark noodles, you'll also find crunchy pieces of fried lard. 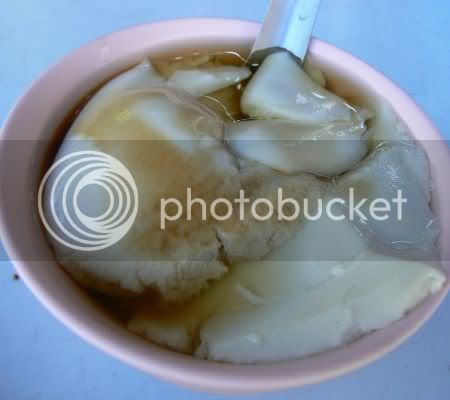 For dessert, you can order it from the man running the soya bean stall - try the Michael Jackson, a Malaysian concoction of soya bean milk and cincau (grass jelly) strips (RM1) or the smooth soya bean curd (Tau Foo Far - RM0.70) which comes with a gula melaka syrup tinged with ginger that is refreshing.
Char Kuey Teow Stall
Behind Yut Kee Restaurant
Entrance is from Jalan Kamunting or from Jalan Raja Abdullah

(Available for breakfast and lunch. Non-Halal)

Tagged with: Char Kuey Teow + Malaysian Food
Posted by boo_licious at 12:00 AM

glad you like this CKT but i like mine without eggs. it really brings out the flavours that way.

The colour of this version looks dark and less freshie than the Pg version, but no less tasty ?

Is this the same or that lady standing beside a drain near the popular mamak stalls at night ?

its high time you wrote a book and got it published. it'll be a waste of talent, and gross injustice to mankind not to do it..... such tantalizing pics!!!!

i was saying, before i lost my comment, that you should write a book, for it will be a gross injustice to humanity if you deprived the world of such culinary goodies and glorious pix. looks so tantalizing. yumm, with cyc too!! chee yau char.

aiya, what is wrong with blogger. how come i cant delete my own comments one?

it's good eh :)
not many of these type of CKT around anymore

So is Penang style nicer or the KL version? I don't remember I ever tried the KL one though.

wmw - then I guess u will like the Jalan San Peng prawn noodles as it looks full of lard!

babe - hmmm, ok, will try that next time.

bsg aka tonixe - no idea abt the nite stalls.

fatboybakes - once you enter, you cannot delete. Only I can delete. So you going to finance my book?

precious pea - both equally good. It's not that wet compared to the Penang style.

first time i hear of KL Char Kuey Teow! looking at the pix i think i've tried something like that - a bit moist and more dark sauce. yummy..

hey i echoed what fatboy said! you should publish a book.. surely a publisher would want to snap you up and if not self-publish also can. you have already a pool of fans!!

think about it.. i want a personalised autographed copy btw ;)

I last ate at this stall almost 10 years ago. Then the father was the one frying and the daughter was helping to bring the plates to the customers. I remember the fried kuay teow was yummy and it was a generous plate. I have not tried the daughter's cooking. Perhaps I will when I next visit Yut Kee. But then once you are at Yut Kee, would you want to try anything else but Yut Kee's sumptuous menu? :)