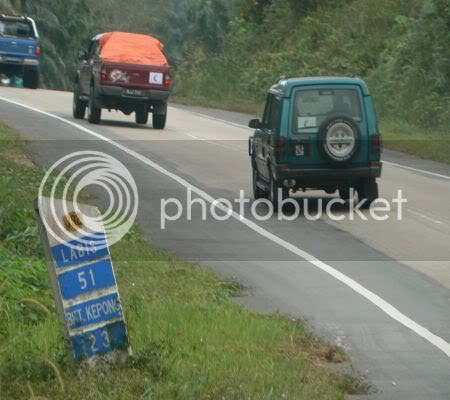 Yesterday, after a rendezvous at Seremban's R&R Stop, we headed down south for the first of our trips to carry supplies to the flood victims. A total of eight 4WDs went down whereby most of them were either from the Lanun Darat or Buaya groups. Earl Ku from Kukujiao who heard about the trip through Babe in the City-KL also joined us. Each vehicle was carrying various items collected from kind people such as rice, cooking oil, canned food, clothing, milk powder, school bags, children's toys and etc. 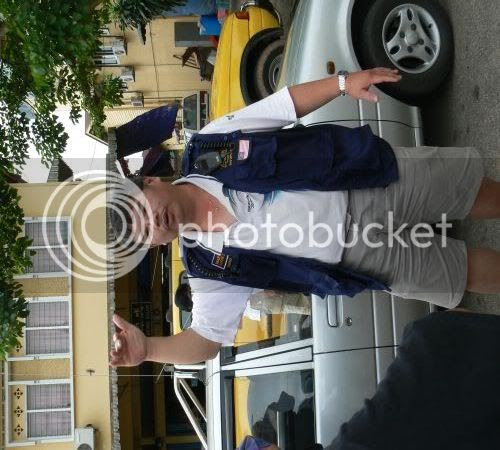 We chose to head out to Lenga town, just off from the Pagoh exit after discussions with the local contacts and the district welfare officer instead of the earlier mentioned Sri Medan town. On the way there, you can see marks of the flood based on the muddy tracks left. Some parts of the town was luckily not affected like the shops as it was located on higher ground. After a briefing from the local contact, Choy who advised us two areas to concentrate on i.e the Malay village of Kampung Sungai Berani and the Chinese village at the other side of the town centre. 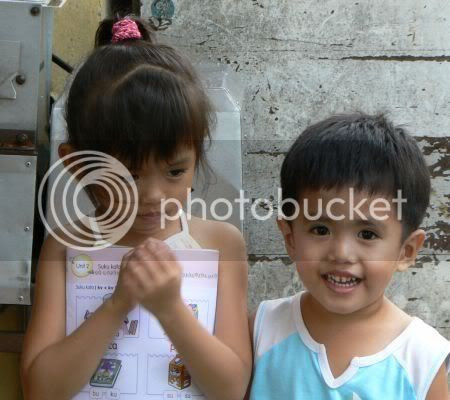 While we were waiting around the shops for the briefing, I couldn't resist snapping pictures of these cute kids at the local sundry shop. They were very enthusiastic when I started taking their pictures especially the jovial little boy. The town is the typical one row of shophouses type located just opposite the local police station with a mix of: sundry shops, a motorbike repair shop, a furniture shop, a rubber sap collecting centre and a hardware shop. Surprisingly there's no proper restaurant here as the only place opened was just serving snacks and refreshments to the locals. 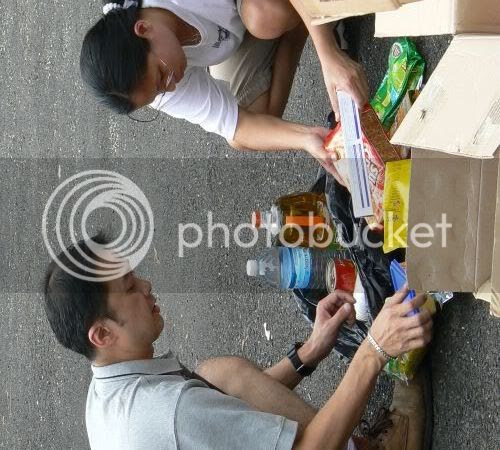 The policemen were kind enough to let us park at the back of their police station to repack and sort out items among each of the cars. This was to ensure an equal distribution of the items needed by the victims. 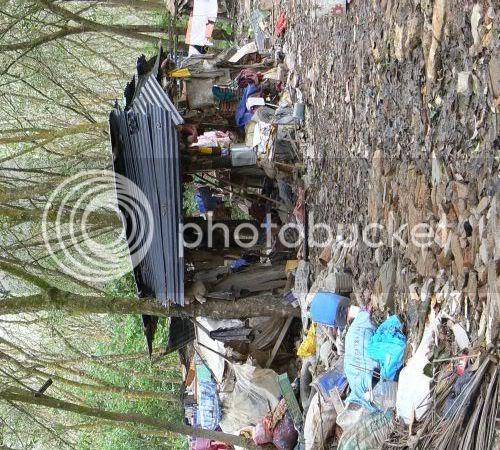 We headed towards Kampung Sungai Berani which faces the river banks of Sungai Muar ( I think it's Sungai Muar but I could be very wrong, so this may be amended). Along the road leading into the village, you see houses affected by the flood. Although most of them are back in the homes from the relief centres, they're still clearing out items and drying them out. You'll see them hanging out clothes to dry, ruined items discarded on the side, mattresses hung out to air and sofas completly ruined from the flood. 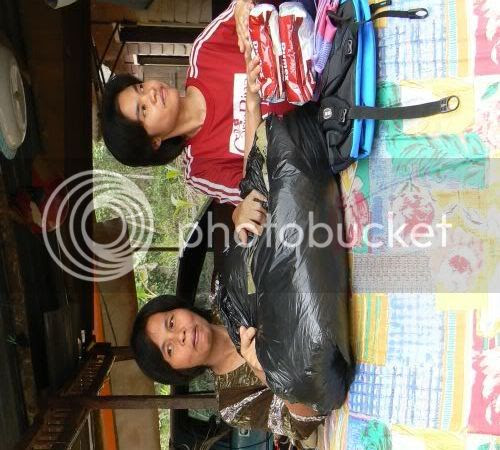 The floodwaters reached up to almost the top of their roof which made it virtually impossible for them to stay in their houses so they were relocated to the local mosque. 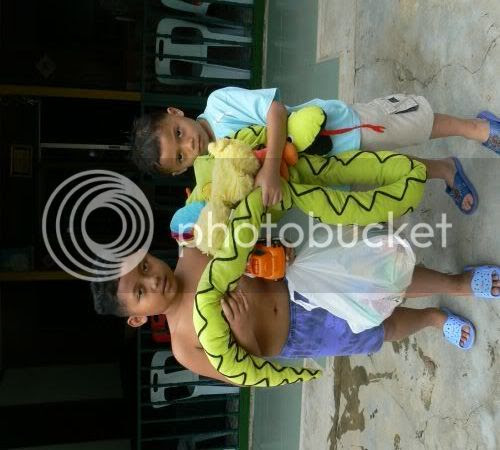 Whenever we saw kids, we gave them toys, schoolbags and clothes to help them out. Initially, they were stunned to receive the items but later on when you pass by their houses, you can hear them playing with the toys. One little girl, opened the plastic bag of toys and her small little face lit up when she saw what was inside. 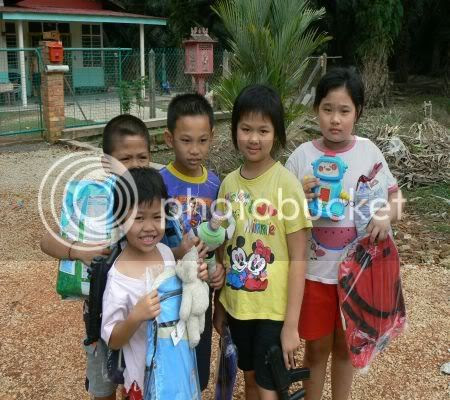 At the Chinese village just before the town centre, you get a mix of wooden houses and brick houses within an area which were affected by the flood also as they're located in the low area (Lenga town is in a valley). Although we delivered staple food items to their parents, the kids were the happiest with their toys and schoolbags. One of these kids was really taken by the white teddy bear she received as we saw her later running to another house to show her friend what she got. 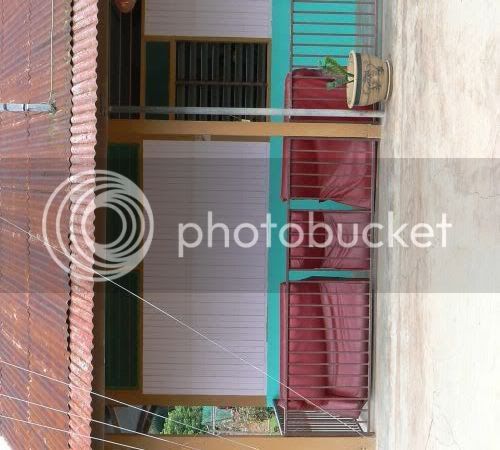 Here, most of the houses have cleared up the debris and the inside of their houses. Some are still drying out their sofas and cleaning the inside from mud. See the slightly faint mark on the wooden house's front wall, that was how high the water level got. 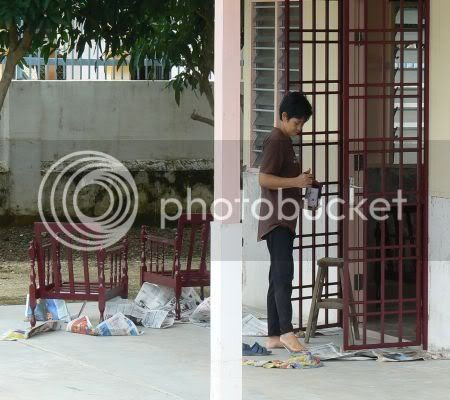 Some of them like this lady was repainting everything in their house in preparation for Chinese New Year which is to be celebrated in February. 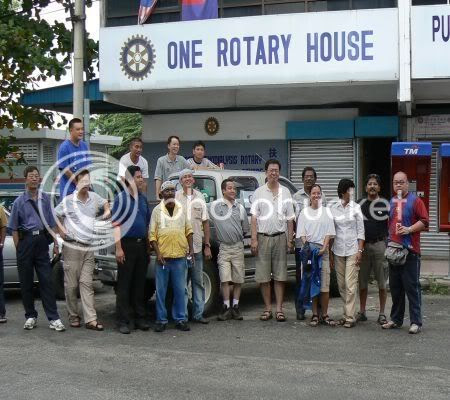 After Lenga town, we headed towards Batu Pahat whereby we met the Rotarians whom we passed the remainder of the items to deliver to other affected areas. Getting all those items up the stairs to their first floor office was a herculean effort but made easier with lots of teamwork. A quick chat with them indicates that there some areas still under flood waters around the town but coordination for the relief effort is poorly organised resulting in delays or wasted efforts. I guess next week, we'll have more stories on what's happening down south since another trip is planned for the weekend.
Thanks to everyone who helped out with their donations of items and monies plus all of you guys and gals who came today. Special mention must be given to our convoy leader, the Silver Surfer who coordinated the whole exercise. Thanks also to the locals who gave us tips on where to go and what's happening in the affected areas. (At this moment, I haven't got everyone's names but they will be amended and included when I get them)
Posted by boo_licious at 1:38 AM

Great job. I am really proud of you. We have flooding here which is caused by hurricanes. Luckily, it has never been bad.

flymeng - thxs! It felt good to help out yesterday. Hopefully we get more achieved next weekend.

Good on you guys! Miss those days...
It is weird when one part of the world has seen the worst draught in years and it is flooding in Malaysia.

Hi Boo. You'll be making another trip next weekend? I'd like to donate some stuff if you are still collecting. Just let me know what you need and when. Thanks.

kat - yes, we are making another trip down but what we observed is they have a lot of stuff hence we're not collecting items at the moment until we determine what exactly is the best to bring down. Will let you know once we find out. Thanks so much for yr offer of help.

This is great...and I loved the pictures you shared. Clean up after something like that takes such a long time. I've got friends heading down to New Orleans to help clean up 2 years after the hurricane and levy break. Thanks for sharing your story.

you guys did a wonderful job! i was LOL reading Yamin Vong's account in yesterday's NST CBT!

hi boo, what a fantastic job. really good of yall. yar, please let us know what specific items you need before your next trip.

God Bless you for you and your friends' contribution. Glad to know there's still hope, as that's what all those who are contributing are restoring in the lives of those affected.

I think it's great that you guys are helping out in your own way. What most of us just talk about, you're actually DOING.

Anonymous said...
This comment has been removed by a blog administrator.
2:44 PM

Anonymous said...
This comment has been removed by a blog administrator.
2:45 PM

Anonymous said...
This comment has been removed by a blog administrator.
2:46 PM

Anonymous said...
This comment has been removed by a blog administrator.
2:48 PM

Anonymous said...
This comment has been removed by a blog administrator.
2:54 PM

wow, so proud of u.. in helping others i think u also learn something yourself. i read that they're having too many `junks' donated. i think ppl should donate good condition or even new stuff rather than old, unwanted things!

seattle tall poppy - yup, recovery from something as major as this definitely takes time.

babekl - Yeah, I was also LOLing at his acct.

fatboybakes - will txt you once I know.

wmw - yeah but it's only the tip of the iceberg.

lyrical lemongrass - nah, it's thanks to our great convoy leader who is getting things down. We just follow him and help out.

jess - yeah, you will be surprised abt what people do donate as a lot of people think it's dump their old clothes (esp with CNY round the corner) without total regard of what people actually need.

Boo, do you know of a NGO that people outside of Malaysia can give to? I am so sorry to read about the flooded areas. Thank you for being helpful to those who got flooded.

lannae - sorry am not sure but why don't you contact Malaysian Red Crescent Society? Their website is