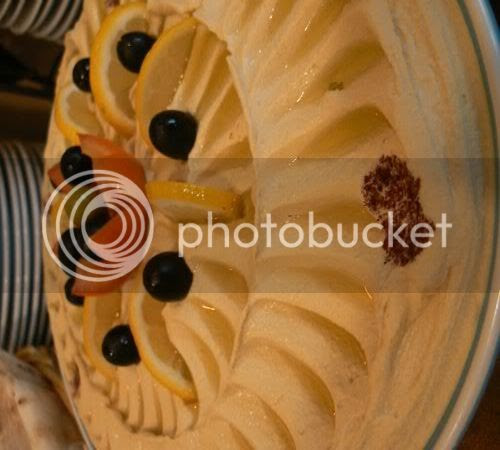 I'm sure quite a few of you know of this place - Al -Marjan in Suria KLCC since it's something not new. In fact, when I googled for other reviews on this restaurant, quite a few hits came back. Anyway, it was my first time visiting the place after hearing a lot about it from Splashie Boy.

Located near Chakri Palace and Summer Palace, Al-Marjan brings authentic Lebanese and Persian cuisine to our shores. There's two parts to the place: their main restaurant and a cafe which you can sit outside in the shopping area. You can order the same food if you sit at the cafe area which also serves tea and sweet pastries. 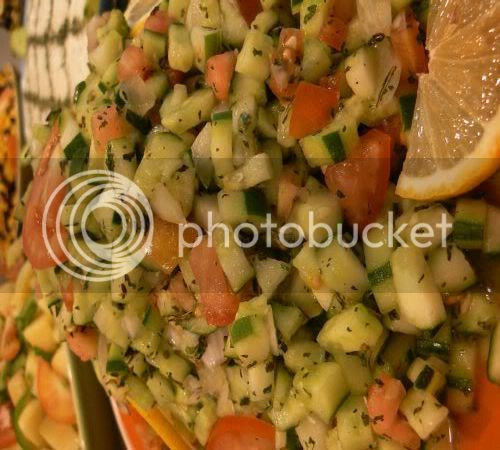 Al-Marjan is famous for their buffet especially the lunch one at RM45++ which is great for those who want a speedy lunch since everything is laid out for you. There's a selection of salads, dips, main meals with rice, chicken, meatballs, soups, desserts with fresh fruits, sweet desserts, arabic coffee and drinks. If you don't feel like eating too much, you can choose to have the lighter buffet version at half of the price by eating just their appetisers and desserts. 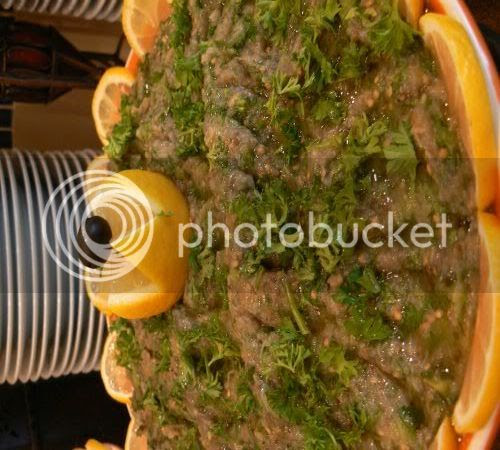 The a la carte menu serves similar items that are available in the buffet such as the hummus, baba ghanoush and etc. They also have a number of grill items with various types of kebabs, sandwiches with lamb kofta, shish kebab and stews. Unlike Al-Diafah, I prefer the way they serve their pita bread for the dips. It's wrapped up in plastic so it's still soft when you open it to eat. Whereas in Al-Diafah, the bread gets hard quickly as it's left in the open air. 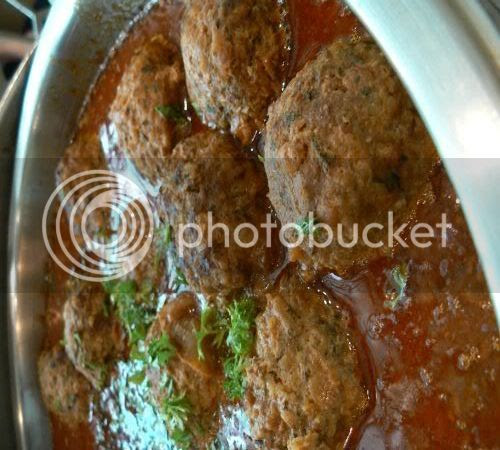 I'm perfectly happy to just eat their dips and salads since I love those. Most of the salads are quite simple and tossed in a mixture of just lemon juice and olive oil. There's a really large selection ranging from Arabian potato salad (boiled potatoes tossed in lemon juice, olive oil and fresh herbs), fattush (it's a combination of fresh vegetables and baked pita bread to add crunch to it) and Salad Shirazi (diced cucumbers, onions and tomatoes). My two favourites are their Hummus mixed with Tahini and Baba Ghanoush made from grilled eggplant. Although I didn't take the meatballs from the buffet, Splashie Boy who has eaten it before swears it's the yummiest around town. They make it extra big here and from minced lamb. If you're not used to gamey meats, it may not be your kind of thing though. 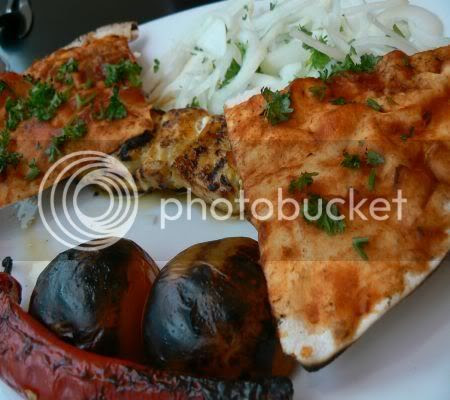 Since Splashie Boy also wanted something light, he ordered their Jujeh Kebab (RM26++) from the a la carte menu. It's basically chicken breast that is marinated in a citrus and saffron marinade. Very juicy and tender, you eat it with grilled vegetables and pita bread. There's all kinds of kebabs on the menu ranging from lamb, fish, prawns and beef. 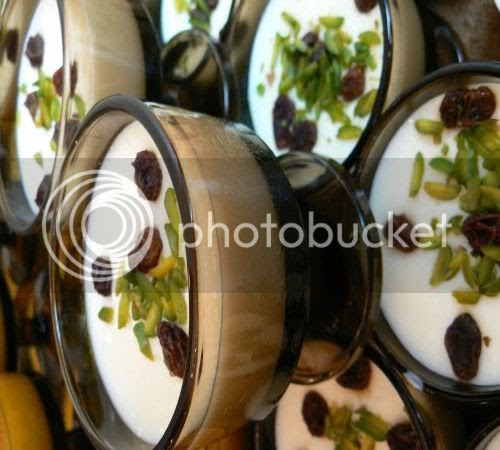 Although they serve a variety of desserts, I zoomed in on the exotic ones such as their Mahlabbiyah. It's made from rosewater, pistachios, raisins, rice, sugar and milk. It was my favourite out of the three they were serving as it wasn't too sweet but deliciously creamy. 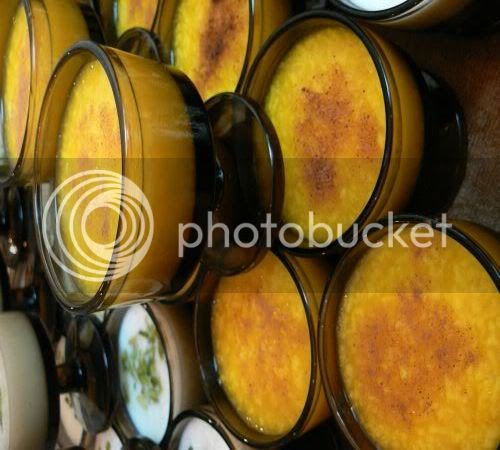 Something eye catching was this Shirberenj which was tinged yellow with saffron and is made from glutinous rice plus sprinkled with cinnamon. There's also another similar variety made from glutinous rice called Sholezard that is topped with chopped pistachios. I didn't really like the tastes of these two and preferred the sweeter Mahlabbiyah. Besides these desserts, they also serve Arabic Coffee, dried apricots, dates, dry figs, cookies, creme caramel and fresh fruits.
Even though I didn't try their mains for the buffet, it looked good with rice and chicken kabsa. It was quite packed with people during lunch and service is brisk here. Definitely a place I don't mind revisiting again to try out more items on the menu or the full buffet spread when I am super hungry.

(Halal)
*Disclaimer: The opinions expressed here is entirely based on my personal tastebuds and may vary for others. The reviewer also declares that she has not received any monetary or non-monetary compensation from the restaurant for writing this review.
Other reviews:

da meatballs and salad, yummyyyyy-licious! feel like to re-visit this place after reading your post.. oh by da way, you mean there's a daily lunch buffet? i didn't know that as i thought they only have it during da ramadhan month...

meiyen - they have buffet lunch and dinner daily so you can eat here all the time. The dinner part I am not 100% sure so call and d/check b4 you go down to KLCC.

hubby and i hv wanted to take the buffet dinner once but after walking past the line hubby got turned off by the gamey mutton smell, so till now we never got back there, how sad.

oppss....i guess im wrong all the time. This restaurant is one of the restaurant i never think of trying. May b i doens't like Lebanese cuisine but after reading yr blog, the assorted dessert worth to explore...hehe

Personally I think the buffet lunch is quite okay. The only thing that I really liked there was their pilau rice. The Arab coffee was pretty interesting. But you're right, if you're into dips and salads, they have quite a spread. The meatballs is quite as yummy as the Middle Eastern place at the Signature Food Court (can't remember the name).

Wow, the food looks so special and tempting. Thanks for the information. Would like to try it one day.

Would luv to try the desserts. Other dishes appear to be too oily n meaty for me ^_^

It only 9:45 am and I am already hungry...your mistake ;-) It looks attractive, with a small preference for the dessert ;- )Are you eating always in restaurants ???

babe - don't think yr hubby can eat lamb as too gamey for him.

jsckson - I think difficult unless you're willing to explore the dips and etc. The Al Diafah is nice since got rice and chicken as you don't take beef.

Izad - bf reckons it's nicer than Tarbush. I like dips and pitta bread so I was in heaven eating that.

galaxie - hope u enjoy it.

xiu long bao - the dips not too oily, quite refreshing and healthy.

claude olivier - not always, sometimes eat at stalls which don't cost that much.

hmm, there's only one restaurant of this genre on that floor right? i had a buka puasa there once, and it was VERY good i thought. but alas, i can only eat middle eastern food once a year or once in two years. too rich for me lah, all that meat and yoghurt....

Mmmmmm....reminds me of the fabulous food in Abu Dhabi!! I don't know about the breads here, but over there the breads are fabulous! Especially when hot off the oven! We'd wrap them up with cucumber/lettuce/olives (which is complimentary) and eat with various dips. So yummy!! And we're usually half full before the main course of grilled meats come!

One of these days, I'll make a trip to this place to try their appetisers and desserts

the salads there are good indeed, but i wouldnt recommend their seafood dishes esp the fish.

It so fishy and nasty...

Thnx for the info. i just love Arabian dishes. Looking forward to dining at this restaurant next week, hopefully...!!!

shella said...
This comment has been removed by the author.
4:17 PM

Hi boo_licious,
Kindly be informed that this post has been reprinted on JoinMe.com.my, thanks. ^^
P/S: We have put your name and link credit back to this article.