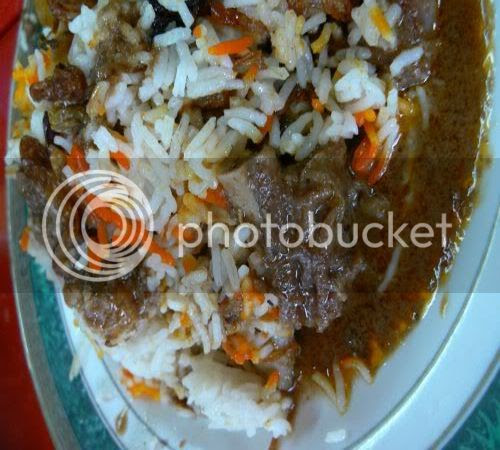 Since we were in Batu Pahat on Saturday, Nasi Briyani or Nasi Bariani as how the locals spell it was the obvious choice. It's been ages since I visited Batu Pahat hence I was totally lost. Only vague memories I had was my dad taking us to eat at a place near the hospital. Luckily, the Rotarian whom we earlier met lead us to this particular place near their office. His first suggestion was Power Bariani which is further away but he took us to this one since it would have been a long journey with traffic.
This place has been featured by the local cuisine show, Jalan Jalan Cari Makan as they received a plaque from them which is proudly displayed in the restaurant. After chatting with them, I found out they're somewhat related to the Bariani Power House located in Section 13, Shah Alam which we had at Subang Jaya's Ramadan Bazaar. No wonder the food looked similar as they use large steamers on slow fire to keep the rice warm, coloured rice for decoration and a topping of raisins. 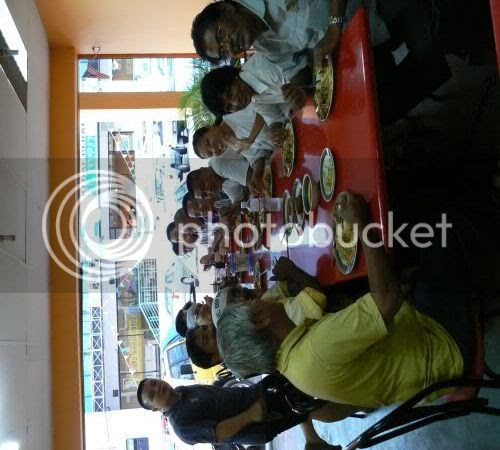 I must admit my tastebuds this time was biased as I was super hungry and this was my first proper meal of the day. Meals during the whole day was just half boiled eggs, coffee and kaya toast which we had at Lenga town. However it tasted really good to our hungry tummies. The lamb which I had was tender and fragrant with spices. The rice I felt was not as fluffy and fragrant compared to the nasi briyani sold at the Taman Tun Dr Ismail Ramadan Bazaar. Maybe it could be because it was cooked much earlier during the day since they have been opened for the whole day.
Since there was such a big group of us eating there, we helped the restaurant finish up their food for the day. Thanks to the Buaya group as they picked up the tab for the meal. If you wish to try their food, there are plans to open up another outlet in Johor Bahru. Alternatively head to their friend's place in Section 13, Shah Alam which serves the same type of Nasi Beriani using a similar recipe.
Super Bariani Gam
14 & 14A, Jalan Kundang 3
Taman Bukit Pasir
83000 Batu Pahat

(Halal)
*Disclaimer: The opinions expressed here is entirely based on my personal tastebuds and may vary for others. The reviewer also declares that she has not received any monetary or non-monetary compensation from the restaurant for writing this review.
Tagged with: Nasi Briyani + Malaysian Food
Posted by boo_licious at 12:00 AM

Hi, it looks great !!! I have seen something like that when I was in KL...ah, such good souvenirs...

Yum--it looks wonderful to me. Tender lamb and all that good looking juice. YUM!

Never tried Super Briani before. Never bought it from the S.Jaya Pasar Ramadan. But pernah try the one from JM Briyani. The shop in S.Jaya was just behind our Malaysian home in Subang jaya. Sure miss all the good food now... Bilalah boleh balik Malaysia.

wow....da nasi briyani looks so good and colorful :D too bad that this place located quite far away or else i can bring my other half to try it..

anyways, it was really nice meeting you and fbb in isthmus last fri..!definitely my pleasure....:D

Claude-Olivier - it's a popular dish in Msia as you get it everywhere.

sher - the lamb was really nice and tender.

flower - have tried JM Bariani too and it's good. We usually eat that whenever we visit Tesco Shah Alam as they have a branch there.

meiyen - sorry we didn't have long to chat that nite, guess we can organise something else another day.

you are very lucky indeed. I was there two weeks ago, and I was looking for Beriani Power in Taman Sago in Batu Pahat. I found the place after 45 minutes only to find out that it was closed. Apparently they are not open for dinner.

Have you tried Bangi's Briyani Gam place.. I recommend !!

bernsy - I read abt the Bangi one from another friend's blog. Heard it's worth a trip down there.

the colour in the rice derives from Saffron, kind of 'luxury' spice. And it is not mainly meant for deco but for the taste and benefits.

rush murad - thxs for the tip. Saffron is pricey stuff as I read abt how they farm it.

hmmm din know they have one in Taman Bukit Pasir, I always thought the Power Gam is at Taman Soga.

I like the one at Peserai. As described in this blog

OMG Nasi Bryani in Batu Pahat... Well may be you should go to Nasi Bryani Md Shah... it is the first shop provided nasi bryani to patu pahat ppl.... located in food court near batu pahat bridge :)called benteng i think by that you will know by first hand how batu pahat get so popular with nasi bryani until more and more fake nasi bryani stall arise :)

hai..im liza..i would to ask a permission to link your blog.. i searching for nasi beriani lovers who had came accross to batu pahat.. mine is http://berianionline.blogspot.com/
..if u refuse to be in my bloglist...
please let me know tq.

I’ve just eaten here today. I prefer the one here, and I’m declaring it the best beriyani in the whole wide world.

Md Shah’s is really really good too, but it’s too overpowering without any acar.

I think the rice being less fluffy is a characteristic of beriyani gam.