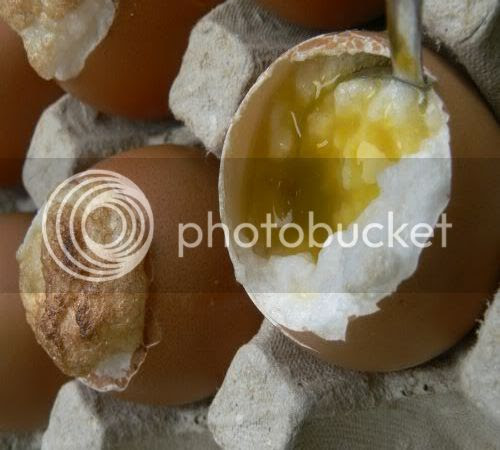 Luckily I conquered my slight fear of souffles when I tried them out for the first time in IMBB 20 as the new Donna Day's theme by running with tweezers is all about souffles. Knowing how difficult it is in getting the perfect souffle (I had to attempt it four times before I got one which I was satisfied with the last time), I was all out for the simplest recipes.

Sometime back, I picked up the cookbook, Off Duty which featured the world's greatest chefs and what they cooked at home. I was attracted to one recipe in it - the adorable Egg Souffles made by Michel Richard who runs Citronelle, a restaurant in Washington DC. It was perfect for me as it was whimsy, fun and simple to make. In fact, this time round my souffle efforts were all a breeze. In this recipe (seen below), the egg souffle is a clever mix of yellow lemon curd for the yolk and snowy white meringue as the egg white. Incredibly simple to recreate, it's served in an egg tray you usually pick up from the egg seller at the wet market. I loved the taste of it since I like tangy lemon curd and light meringue. 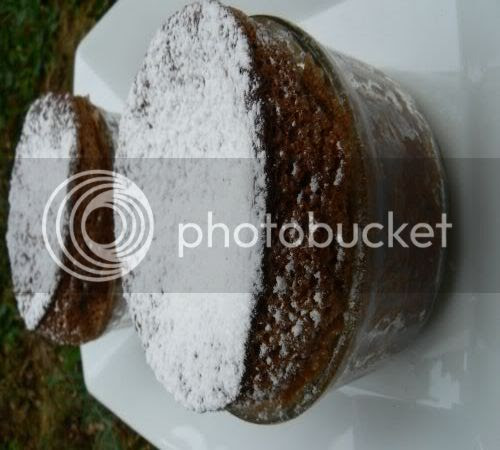 Seeing my first effort wasn't much of the traditional souffle, I decided to play safe and make another one from the same cookbook. This time round, the recipe was from Alain Roux, famous for his work in Waterside Inn with his father, Michel Roux. Again this was slightly unconventional as it uses Toblerone chocolate. Easily available in any supermarket, Toblerone represents all the fun things in life for me. I love the triangular shape of the chocolate that spells it's name on the side and the chewy almond nougat bits. My souffles puffed up tremedously after a short stint in the oven making it look slightly like mushrooms with huge brown caps. Taste wise it was yummy and I probably should have added additional nougat pieces inside it as the ones in the chocolate melted when I heated it up.
Do give these a try especially the fun looking Egg Souffles. There's definitely a wow factor to it but make sure people like lemon curd as it's not something everyone likes. For instance, Splashie Boy my chief taster hates it. Check in at Running with Tweezers as we'll be voting for the best souffle from the event after she posts the round up on February 3rd.
Egg Souffle (Serves 4)
8 eggs
juice of 3 large lemons
325 grams caster sugar
40 grams unsalted butter
Using an egg cutter or a very sharp knife (I used my Global knife), cut the tops of the eggs carefully. Discard the tops, keeping only the bottom of the egg shell for presentation. Seperate the yolks and whites of 4 eggs. The remaining 4 eggs can be used for an omelette.
Make the lemon curd by placing the egg yolks, 100 grams caster sugar, lemon juice and unsalted butter in a microwave safe bowl. Microwave it for 5 minutes, pulling it out every minute to whisk it. Cover with cling film and leave it to cool. It will thicken when it cools. You can make this one day ahead and keep it in the fridge.
Whisk the egg whites, adding half of the remaining sugar little by little until they form soft peaks. Fold in remaining sugar with a spatula.
Place 8 eggshells in eggcups (or the eggtray). Put meringue in a piping bag and half fill the shell with meringue. Spoon the lemon curd in another piping bag and pipe about a teaspoonful into each eggshell. Add more meringue on top to make it look like a souffle. Place in microwave for 5 seconds. If you have a blowtorch, use it to brown the tops or like me, put it under a hot grill for a few seconds.
Warm Toblerone Souffle (Serves 4)
a little softened butter
75 grams caster sugar
200 grams Toblerone, chopped
2 teaspoons plain flour
7 egg whites
Brush insides of four 8 cm ramekins with softened butter. Put 30 grams caster sugar in one of the ramekins and coat thoroughly. Tip excess sugar into next ramekin until all are coated with butter and sugar.
Put 140 grams of the Toblerone in a bowl and place it over a pan of simmering water, making sure the water isn't touching the base of the bowl. When it has melted, remove from the heat and stir in the flour.
Beat egg whites with 75 grams of the caster sugar until they form semi firm peaks. Using a whisk, mix one third of the whites in the melted Toblerone, then delicately fold in the rest with a spatula. Scatter remaining chopped Toblerone over surface and mix gently. Divide mixture and smooth surface with palette knife. Place on baking tray and bake for 10 to 12 minutes in oven preheated to 200C. Serve immediately.
Tagged with: Souffle
Posted by boo_licious at 1:30 AM

fatboybakes - this time round, I can see easy as it was so blardy hard the last time I made it. Dunno, I just whacked the tray in my ovens but it was only for a short time. Thxs for the fruitcake, very nice of you to remember me.

Waaaah you've been a busy bee! I conquered my souffle fears too. Took me ages to realise that you just can't be too careful and scared when handling fluffy things. The lemon curd souffles are gorgeous!

I'm been wanting to try the egg cup thing, yours look amazing!

Those little egg shell soufflés are so clever Boo. Thanks for joining HHDD.

brilynn - they're simple to make and really different.

barbara - no problems and thxs for coming up with the idea.

boo_licious said...
This comment has been removed by the author.
11:32 PM

Adorable! The little egg ones are so cute! :) And Toblerone...YUM!

are you talking about a recipe based in boiled egg, don't you? well in that case, add Generic Cialis to this recipes