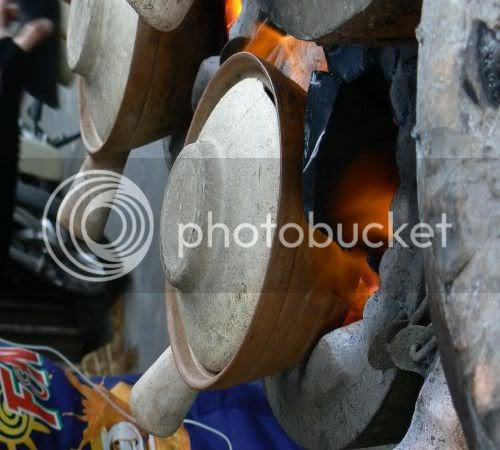 Ever since I started my quest to explore Pudu for their delicious food, people keep mentioning Heun Kee as a must try for claypot chicken rice. Located on Jalan Yew which is always jam packed with people going to the Pudu market, this restaurant is tucked just under the highway. There are lots of other notable eateries around Jalan Yew - Hup Yick's Fuzhou fishballs and May King's Lum Meen. Even though this place is jam packed all the time, if you are patient, you can easily get a car park at the public spots under the overhead bridge. People keep coming and going from the market hence the frequency of car spots being made available is quite high provided you are willing to wait a while.

You can clearly see Heun Kee's claypot rice stoves which are placed right in front of their restaurant that is manned by two young ladies. A large metal pot of soup is also located next to the stove which is used to cook the claypot rice adding additional aroma. It seems they are famous for adding hot charcoal to the top of the claypot when they are cooking the rice. Strangely I didn't see this being done hence I am not sure if that method is reserved for special dishes. 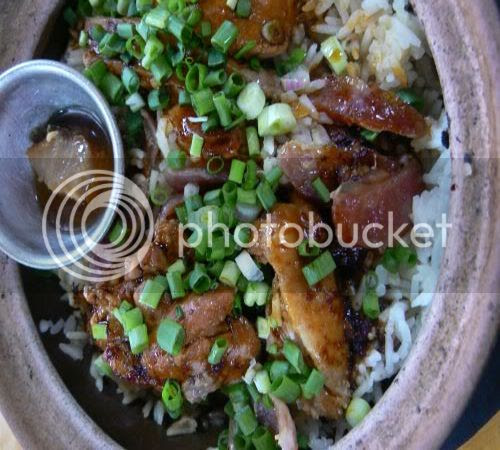 We had the claypot chicken rice which came with slices of Chinese sausage (Lap Cheong in Chinese) and salted fish. The rice cooked is slightly softer than the other claypot rice places but it is really nice and aromatic with the broth it has been cooked with. I wasn't too satisfied with the crusty bits at the bottom of the claypot as I felt they were not enough as I liked a nice mixture of crispy and cooked rice in my claypot. You can smell a slight whiff of rice wine when they first serve you the rice as a dash is added just before it's taken off the stove. 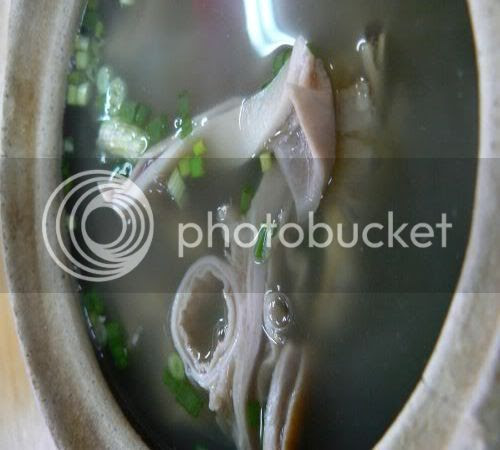 Besides the claypot chicken rice, they also have claypot waxed meats rice which is seasonal and only available at the end of the year. There's also a claypot chicken cooked with Chinese wine, claypot fish head curry, various soups, seafood tofu and the pepper soup filled with slices of the pig's stomach, chicken legs and lots of white pepper. We tried a small portion of the soup which came piping hot and filled with ingredients.
Heun Kee Claypot Rice
59, Jalan Yew
Pudu, Kuala Lumpur
Tel No: 03 - 9200 1603
(Open for lunch and dinner. To get there, from the Sungai Besi highway, take the turning towards Pudu. At the roundabout take a twelve o' clock turn and you will be at Jalan Yew - it's one way so use this way or come from Wentworth Hotel which is across the road. You can make a U turn and see Heun Kee at the left hand side which is tucked in one corner. It's advisable you try and locate a car park space around the area.)
*Disclaimer: The opinions expressed here is entirely based on my personal tastebuds and may vary for others. The reviewer also declares that she has not received any monetary or non-monetary compensation from the restaurant for writing this review.

havent tried this, never knew there was one there also, but same row as the Lum Mee, there is a shop which sells old school bak kut teh, not the claypot style with vege, and mushrooms, just bowls of soup and meat with innards ...

ok back to the claypot chicken rice, there is one nice one at Jalan Pudu, you know the Maybank(coming from Pudu Jail to Maluri direction) the one there is very good also.

just want to ask what digital camera you are using as i am thinking of getting one myself (finally) :)

When did u go? Braved the snarling traffic jam & brought frienz to pig out (dinner) there last Wed but it was closed! *sniff-sniff*

earl-ku - yeah, this place is not exactly so prominent becoz it's slightly hidden behind the highway. Saw the BKT place you talk abt - it's called Tatt Boon rite? The other claypot place is also quite famous - opens at nite (this is the one near the driving school rite?)

rokh - I'm using a Lumix FZ7 which can be a bit big. You may want to consider the smaller cams as they're easier to carry around. Try Babe's camera i.e. the Casio Exilim or Sweesan's Fuji Finepix which take excellent pixs. This weekend, there are warehse sales i.e. Foto Miami and another Foto shop. See Star Metro on Wed for further details. May be a good place to get great bargains.

Puspha - are u back? Quite near yr place in Ampang but that area is forever jam.

Tummythoz - I thought they are closed on Thursdays? Strange maybe they decided to take off earlier.

Dragoncity - quick, go for lunch there!

Oopsydaisy (can't resist saying that). A check with my disappointed frienz confirmed it was a Thurs. :p

thanks for the tips! will check them out

tummythoz - I know they close on Thursday but not sure if it's alternate Thursdays or two Thursdays of the mth. Suggest you call them up before you visit to d/check.

rokh - Am sure there are lots of bargains with the Mega Sale. Happy Shopping!

Mmmm..I love pig stomach soup! The more peppery, the better!! So you like the crispy rice bits at the bottom...my gigi cannot tahan the hard bits!! LOL I usually eat just the rice and give the hard bits to my hubby!

I usually get my claypot rice fix at Koon Kee, Damansara Jaya. They have great stomach soup too.

kat - I love those crispy bits. Thxs for suggesting Koon Kee, I must try that as I heard it's pretty good too.

have u come across halal yummy claypot chic rice?

a long long time ago there was one at the bangsar shopping centre foodcourt... but no idea where it has shifted to now!

I like the Claypot rice at Foong Lian more. It smell and taste really good. It located at the corner lot with address as follow:

Oh,yes, not forget to mention it has nice environment and jazzy music too.

Try both. still prefer HK instead of FL. HK is much authentic and ori