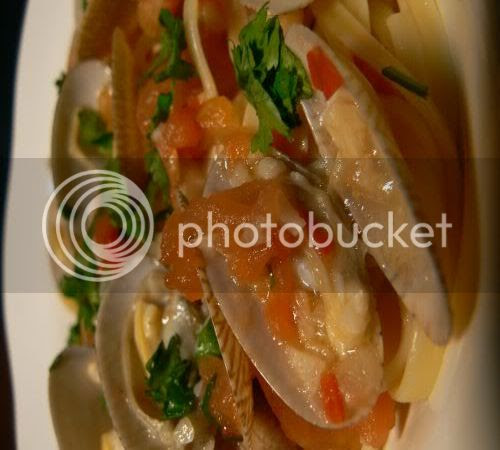 Since Italy is going to the World Cup Final, I thought it's appropriate to post an Italian pasta dish today. Great goals at the end when everyone was expecting a shoot out penalty. On to the food! I have this small love affair with bivalves and when I see these kind of clams I will definitely stop and get some since they are quite rare.
Rather than make a Chinese dish out of it, I decided to try out the traditional Italian dish with clams which I have from the BBC Good Food magazine. It's really simple to cook and taste so great that you'll want to keep eating this.
Spaghetti Alle Vongole
140 grams spaghetti
500 grams clams in shells
2 ripe tomatoes
2 tbsp olive oil
1 fat garlic clove, chopped
1 small or half of a large fat chili, finely chopped
splash of white wine (about half of a glass)
2 tbsp chopped parsley
Put the water to boil for the spaghetti. Rinse the clams in several changes of cold water. Discard any that are open or damaged. Cover the tomatoes with boiling water for 1 minute and peel the skin. Deseed the tomatoes and chop into small pieces.
Cook spaghetti in boiling water as per instructions on the packet. Meanwhile heat up the oil and add the garlic and chilli, then fry gently for a few minutes. Stir in tomatoes, clams, white wine, salt and pepper and bring to a boil. Cover the pan and cook until clams are opened i.e approximately 3 to 4 minutes. Drain pasta and tip into pan to mix with parsley. Dish up and serve.
Posted by boo_licious at 6:10 AM

Italian sounds good. My favorite flavors are Marsala wine, basil and lots of garlic. Maybe you will have French food tomorrow.

simplicity at its best... yumz! yeah so are we going french tmrw? :p

May i ask your permission to post your recipe? I had enhanced the image and you may replace your, if you'd like. You can use any of mine. :)

tummythoz - yeah there are lots of vacant rooms at my place but I doubt you want to share with three felines.

flymeng - hmmm, sorry no French food at this moment unless I rush out and eat Delifrance.

oh my...it's now 10.29pm...and my tummy is calling! This is because "it" accidentally saw the latest post of this "Spaghetti Alle Vongole"~~~ Can't wait to try that recipe. :) In order to comment on this, I've sign up for an account. :)

Niways, I'm a newbie. Have been reading boo_licious's blog for almost a month or two? This blog is so meaningful to me. It makes me feel soo happy whenever I read it. :) Thanks a lot boo_licious for having this blog with your wonderful photos and blog about all the food~!

babe - I wish it could be french food today but sorry nothing in my archive.

littleguykitchen - no problem posting the recipe but maybe you can try it out too?

cookies cream - hey, welcome to the blogging world! If you don't want to sign up, you can use the Haloscan comments on the other side. Hope you will try out the recipe, very simple and yummy.

hehe...Actually I used to blog last time but it's not about food. It's something like random thoughts, life, couples,travels, etc. :) But I've been very interested to see all the food blogs around m'sia! I would like to have my very own food blog too but got a very lousy cam + no time to blog. :(

I love your posts but most of them are at PJ, Puchong, Hartamas, and some in Klang? Would love to visit the places that you've posted especially the "Bumbu Bali", "Eat Workshop", "Salero Negori". =) Totally not familiar with the place.

Oh ya, about this recipe, the white wine can be any type right? I meant for example dry white wine? And is there any differences if I use normal oil instead? Or olive oil will shoot up the flavours in the spaghetti? =)

Shake Trees said...
This comment has been removed by a blog administrator.
4:00 PM

thanks a lot :) you can get the pic now if you'd like.

cookies cream - you can use any white wine. The trick is use white wine you will drink. If you use olive oil, slightly stronger taste. Time to get a nice cam and then you can slowly start taking pixs.

littleguykitchen - why don't you give the recipe a try then you can blog abt it. Do try it out. Very simple.

jess - could be either team I reckon. Should be an interesting final.