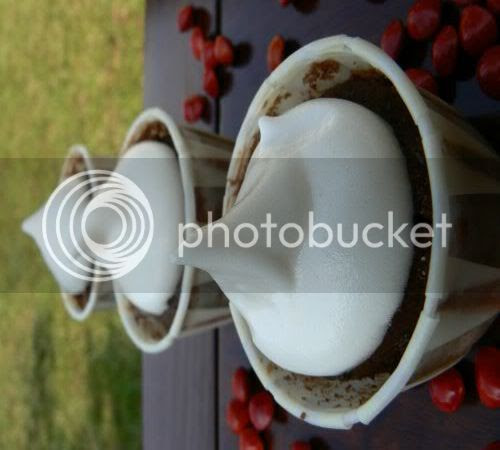 I'm currently in a sweet tooth phase hence I have been churning out things I normally don't make. This was inspired from the latest Donna Hay magazine with her lovely couture cupcakes on the cover. I also wanted to try out my mini cupcake papers which I recently found. The cupcakes were not perfect in terms of looks and I had some major issues with my frosting but I really like the moist cake that was easy on the tummy since it was bite size.
Looking at the ingredients that went into the cupcake, I can understand why it tastes great since it was full of yummy stuff. Not sure why but my cakes seem to pull away from the paper after I left them out a day until I frosted them and took the pictures. The reason for the delay was because I had such issues with my frosting. The original recipe calls for a whipped cream icing that is to flop on top of the cupcake. I tried that and it just didn't flop nicely and I felt it was too tasteless for my liking hence I tried to make another version. I was veering toward a traditional buttercream one when I saw Donna Hay's meringue icing and decided to try it out. It's simple to make and surprisingly it holds really well in our hot weather. Only bummer about this icing is it's really sweet as you need to add the sugar to whisk the meringues. I will need to experiment further with it to see if I can reduce the sugar content without affecting the texture of the icing. After icing them and taking snaps of the cupcakes, I reckon they remind me of little "Caspers" i.e the friendly ghost with their snow white puffs.
Rocky Road Cupcakes
250 grams butter, softened
1 1/4 cups caster sugar
4 eggs (I used large ones)
2 cups plain (all purpose) flour
1/4 cup hazelnut meal
2 teaspoons baking powder
1 cup (8 fluid oz) milk
200 gram (7 oz) dark chocolate, melted over a water bath
12 large marshmallows or mini ones depending on which size of cupcake you use
1/2 cup ready prepared hazelnut spread
Whipped Chocolate Cream

2 cups (16 fl oz) single or pouring cream
1 1/2 tablespoons icing sugar
1/2 cup cocoa powder
Meringue Icing
1 cup caster sugar
1/4 cup (2 fluid oz) water
1 teaspoon vanilla essence
1/4 teaspoon cream of tartar
3 eggwhites
Preheat oven to 160C. Place butter and sugar in the bowl of an electric mixer and beat until light and creamy. Gradually add the eggs and beat well. Sift over the flour, hazelnut meal and baking powder and beat until combined. Fold through the milk and melted chocolate and spoon mixture in preferred cupcake papers - the original recipe is for 12 large size cupcakes but a half recipe yields twenty tiny cupcakes using the above cupcake paper. Bake for 15 to 20 minutes until cooked when tested with a skewer. Allow to cool slightly. When warm, make a hole with a paring knife in the centre and remove the cake centre. Fill with marshmallows and hazelnut spread. Take out a bit of the cake centre and add back the cake top only.
To make the whipped cream topping, place everything in a bowl and beat until soft peaks form. Don't overbeat or else it will become hard. Spread on top with a palette knife.
To make the meringue icing, place sugar, water, vanilla essence and cream of tartar in a saucepan over high heat and stir till sugar melts. Bring to boil and simmer over low heat for 3 minutes. Place eggwhites in a bowl and whisk till soft peaks form. Add sugar syrup slowly with motor running and beat till thick and glossy. Spread on top of cupcakes.
Tagged with: Donna Hay + Cupcake
Posted by boo_licious at 5:46 AM

Hi Boo ... been looking for the type of papercups used in the pic ... where would i be able to acquire them in kl/pj, please? thank you

It's funny:
Half the time I wish I could bake/ cook as well as you but the other half of the time I thank God that I don't have such a talent...
... because if I did, I would probably balloon up to 400 pounds within one year.
:)

jackson - I'm no expert. The expert is Sweesan who's at Le Cordon Bleu.

peetee - good luck in finding the cups. The reply is in Haloscan's side.

J - that's why I don't bake that often. Sometimes got mood will bake up a frenzy though.

Boo,
your "Casper Cupcakes" are so cute! I so love that you called them little Caspers! hehe
I've been really inspired by the latest Donna Hay magazine too! I'm hoping to try out the choc-orange cupcakes (pg 130) this weekend.

I hope you have time to take part in HHDD#4!

Hihi! I'm from Australia and also bought that same Donna Hay magazine! How good is it! Try the raspberry trifle cupcakes - they are FANTASTIC!!! (i made them, and it was pretty much a success... if you like to see how they turned out, I have them on my blog at http://lizwu.blogspot.com).

Are you going to be trying anymore of her cupcakes? :)

Well,.. if you ever overdo it and cook too many, I'm willing and able to help you out (by eating all the extra yummy cupcakes/cookies/cakes/etc)
Not good to waste marr...

oh, was gonna ask u where's chang tung...but i know.
i meant to ask, where has chun yip gone? it used to be in DU, but i noticed its another pasaraya bakeri there now...which i must check out..

bron - can't wait to see yr choc orange cupcakes. That looked good too. Great idea abt the crostini for the next Donna Day event. Will try and come up with some varieties.

j - hee hee, I'll remember that. Better leave an address that I can drop off the cakes at.

fatboybakes - chang tung is at Tmn Megah. They also have a few outlets in KL. Yeah, I think Chun Yip has closed their PJ place already but the KL one is still going strong.

I am new to baking. I wanted to know where do you get cream of tartar. Thank you.