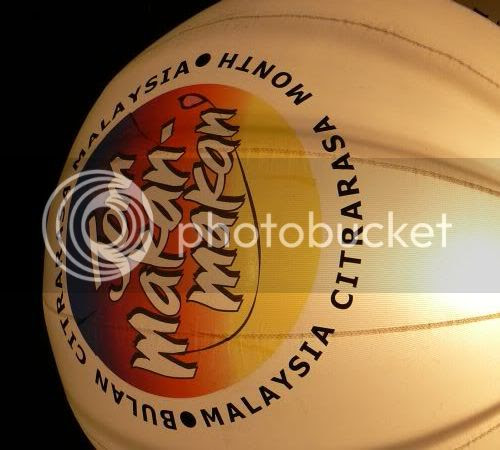 Last weekend, Tourism Malaysia held the Citarasa (Foods and Flavours) Malaysia fair at the Malaysia Tourism Centre, Jalan Ampang which showcases the different varieties of food Malaysia offers. The food event is actually held for a whole month at various hotels but the official launch was held on Saturday night with the stalls opened throughout the weekend.
The place was packed with locals and tourists who were there to sample the different kinds of food offered. One area showcased the participating hotels with their specialities as each of them were representing a different state. Armada Hotel in Petaling Jaya was making their famous Roti Canai Durian - still remember eating that for Ramadan Buffet before and it's really nice. 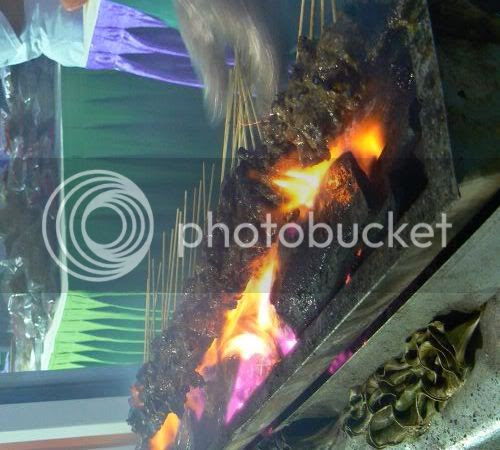 As it was a busy weekend, we only managed to get there during dinnertime. There were stalls all over the place offering local specialities: a popiah basah stall which was vying for a record for serving popiah non stop, satay from the famous Sate Kajang Haji Samuri, Bahulu Classiq, keropok lekor stalls, char kuey teow stalls where they fry the noodles in front of you and the list continues.
I'll only feature the stalls which we found unusual and interesting like this stall selling Sate Tulang (Satay with Bones in English) from Seremban. They were doing brisk business that night (much better than a famous Satay stall from Kajang) and I had to queue for a long time to try out their satay. According to the people running the stall, sate tulang is actually chicken ribs crushed and cut into smallish pieces. It is marinated with a sauce devised by the stall owner's grandfather and is made from seven spices. The fella who runs the stall is a young chap who has just recently opened his own place after running his father's stall in Seremban. It's the first time I have ever heard of this variant of satay before and he told me it's extremely popular in Seremban. Taste wise - it was really yummy and juicy. You will need to sit down and eat it slowly though as some of the bones are crushed quite small. 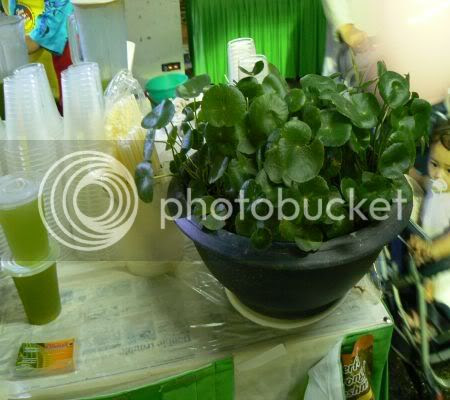 Another extremely unusual item we found was a stall selling pegaga juice. Pegaga (known as Indian Pennyworth in English) is a popular herb in Malaysia that is usually eaten raw in salads and said to have medicinal properties. The herb is used as a tradition medicine and said to be able to treat high blood pressure, fever, toothaches and even improve memory. Some also claim that the herb can help cure malaria and dengue fever. The juice was nice and refreshing that kinda reminded us of sugarcane juice. 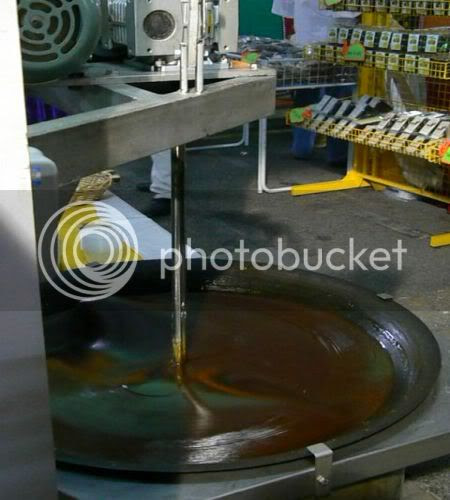 Next to the Sate Tulang stall was a stall selling dodol which is essentially carmelised sugar and coconut milk. Traditionally, it's stirred for a long time over a slow fire until the mixture thickens to a doughlike consistency. For commercial purposes, they use a machine like the one above to mechanically stir the mixture. The dodol is then cut into small pieces and packed individually in plastic. Usually it's flavoured with pandan and if you're adventurous, they also have durian dodol with a mild taste of the fruit.
If you wish to try out the Sate Tulang place, I managed to get the guy's address and telephone number as below:
Che Mansor
Abu Satay
Seremban Jaya (It's after the Senawang toll from the Highway)
Tel No: 017 - 227 9226
Tagged with: Malaysian Food
Posted by boo_licious at 5:53 AM

What a beautiful post and what beautiful pictures! Loved reading some of the archives too!

BTW: You'll love how Garlic and Sapphires wraps up. I just finished it and wrote my own review of it. You should try Salt or Heat if you get the chance!

Passed by Tourism Centre that Saturday ... I saw the event, but didn't know there was some food event too.. :(

Great photos, boo! I can't believe I lived in Brunei for most of my childhood but never had dodol. I do remember reading about it in Lat comics though :)

I wished that i could spare some time there! Heard about it from my seremban fren but never tried one myself..

Boo....next time please inform me if you know any food event like this! How can i miss out the lovely part! OMG, i wan to eat sate tulang!!!

aisayman, jackson just beat me to it. i was gonna say the exact same thing. allo, this is SECOND time oridi i missed out...first was the gourmet awards thingie at golden arses...

next time i got there i'm sure there alot of fun

garrett - thxs! Glad that u love the pixs so keep tuning in for more. Love the bk so far - it's so funny the way she describes her reviews.

tekko - yeah, it was really rocking on Sat nite esp with the dancing and etc.

an9ie - I'm not a great fan of dodol though as I find it too sweet! I prefer the durian cake which has more mashed durian in it.

kampungboycitygal - I'm glad you heard abt sate tulang, it was my first time learning abt it.

jackson - sorry! actually there were so many events that weekend - MIFB was also on that week but I didn't go since I was busy.

fatboybakes - nxt year? You can still catch the different state's food at the hotels.

pisang goreng - it's fun, very carnival like atmosphere with families enjoying their meals.