I have always been a fan of Japanese food and can basically eat most of the stuff they serve with the exception of natto (the sticky beans is just not me!). I love the donburi (Japanese for rice bowl) dishes and most restaurants in Malaysia do serve some of the basic donburi dishes like oyako-don, gyu-don (beef bowl), katsu-don (chicken cutlet) and ten-don (tempura). There are also raw fish donburis such as chirashi sushi (assorted raw fish), tekka-don (tuna sashimi) and ikura-don (salmon roe). With the raw fish donburis, the rice is especially nice as they mix in the rice vinegar so it's the same taste and sticky consistency as the rice used to make sushi.

An easy to make favourite is the Japanese classic, Oyako-Don (Japanese for parent and child bowl) that is made from chicken and eggs, two staples in my kitchen. It's called parent and child since the parent i.e. the chicken and the child i.e. the egg are the main ingredients of this dish. I always have leftover eggs from my baking as I am quite "kiasu" (Singlish for fear of losing out) and like to buy extra just in case the egg is bad which throws a major spanner to my cake baking efforts.

My oyako-don recipe which is just nice for both of us comes from Quick and Easy Donburi Dishes that has multitude of donburi recipes. I usually don't add mitsuba since I'm not partial to it and have made slight variations of the recipe to fit my own taste.

Slice the chicken into cubes and the onion into thin slices. Select a saucepan that is almost the size of your bowl that you will be serving your oyako-don in. I usually cook each portion seperately as my pan is too small for two portions.

In your selected saucepan, bring the cooking broth to boil and add the onion to cook for two to three minutes at medium heat taking care not to boil away all the liquid. Once it is cooked to your desired consistency, add the chicken cubes. Spread the chicken and onions out in the pan and swirl in the lightly beaten egg. When your eggs are partially set (don't stir them during cooking), immediately remove from the heat and cover for about two minutes. Sprinkle some chopped shredded nori (Japanese for seaweed) on top of your rice and place the topping on the rice. You can also add some on top as decoration. Unfortunately, no nori in the fridge that day so my oyako-don looks a bit plain without it. 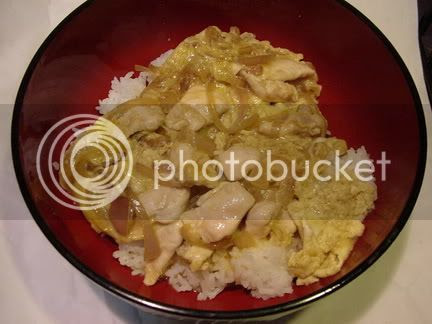