Today is the Dragonboat and Zongzi (Mandarin for dumpling) festival which falls on the fifth day of the fifth month of the Chinese Lunar calendar. The tradition of the dragon boat and making of dumplings can be traced back to the famous poet Qu Yuan's suicide in protest of corruption in China. When the locals heard about his suicide in the river, they rushed out to search for him in their boats, beating the water with their paddles to keep the fish and evil spirits from his body. They also scattered rice grains in the river to try and prevent the fish from eating his body. However, one night Qu Yuan's spirit appeared before his friends and said that the rice meant for him was intercepted by a water dragon and he instructed his friends to wrap the rice in three cornered silk packages to ward off the dragon. This tradition of beating the water with the paddles has now become the famous Dragonboat races where people compete in boats that they paddle just like before to look for Qu Yuan's body. In Hong Kong and Penang, races are being held this weekend for the festival where different teams will compete. The dumplings are made till today although not in silk but from bamboo leaves and are enjoyed by everyone.

Dumplings today come in many varieties and each Chinese clan have their own traditional dumpling. As my mother is Hokkien, we usually have the Ham Yuk Chung (Chinese for Salted Pork Dumpling) which my aunt makes every year. My aunt has been making dumplings for almost 40 years and she even goes overseas to Vancouver and Melbourne to make it for her kids who have migrated there. I was lucky to witness her making a batch of dumplings recently but as she is a fast worker, I could not really get her to slow down and let me take step by step pictures.

Here are the filling of the dumplings, my aunt uses yellow mung beans, rice grains which she has fried to give it colour to the dumplings, salted egg yolks, pork, mushrooms and chesnut which have been cooked earlier. My aunt has steamed and soaked the dried bamboo leaves earlier. These are cleaned and wiped dry before she starts using them to wrap the dumplings. She uses two leaves that intersect in the middle that she shapes in a cone to add the rice. It looked so easy when she did it but later when she showed me how to do it, I had so much trouble making the cone big enough for the fillings. 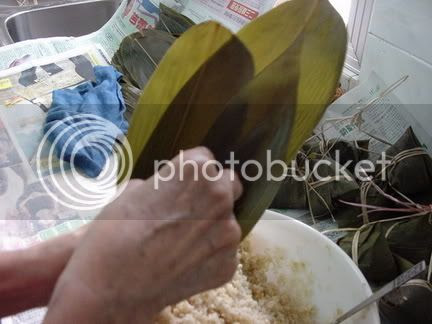 After you add a layer of rice, put in the a piece of pork, mushroom, salted egg yolk and chesnut. Add the yellow beans on top and top with rice. Then you fold the leaves across to make a pyramid shape and turn the flap down as below. Keep it tight so your fillings do not fall out. 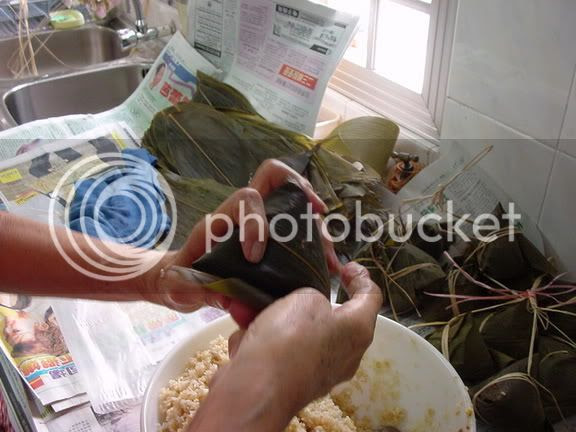 Then you tie it up with hemp string which you should hook up somewhere as it is easier to tie it up. You can tie as many dumplings you like on each hemp string bunch. Once you finish making your dumplings, you will need to boil the dumplings in a big pot of water for four hours. Make sure your water is boiling at all times and you will need to monitor it to top up the water. There are supersitions that say that if a pregnant woman enters the kitchen when the dumplings are being boiled, it will never cook. 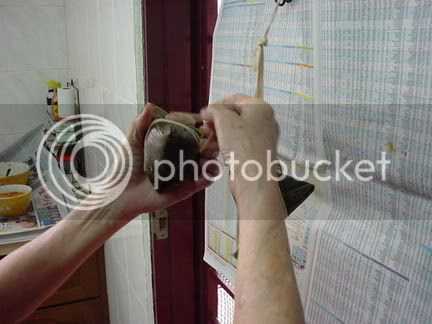 Besides the Ham Yuk Chung we get from my auntie each year, we also buy Nyonya dumplings from this old lady in Sea Park, Petaling Jaya. Recently we visited her at her house to get some dumplings and her house is a mini dumpling factory. There was a man helping her prepare the bamboo leaves, here he is soaking the bamboo leaves in a tub. 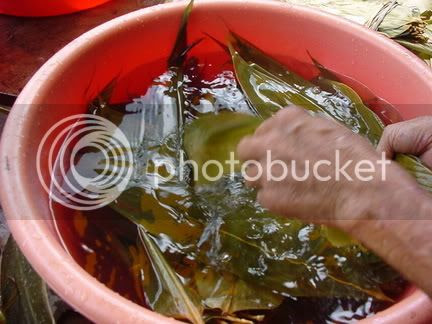 This is the auntie making the Nyonya dumplings, the filling is a mixture of pork, tau cheow (Chinese for bean paste) and winter melon. She has been making dumplings for 30 years for her business and because she sits down to make them, her back is hunched. 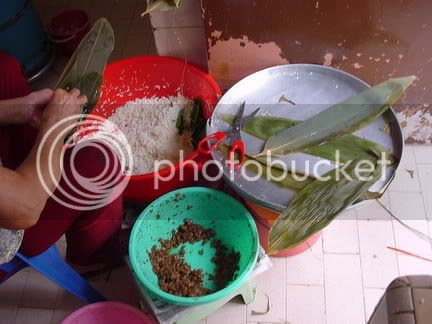 This is the huge pot they boil dumplings in. 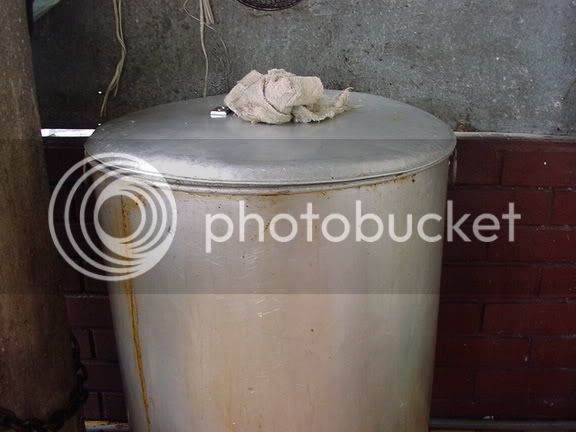 Piles and piles of dumplings at her house. Besides Nyonya dumplings, she also makes the Kee Chang, which is made from alkaline water that have red bean fillings. 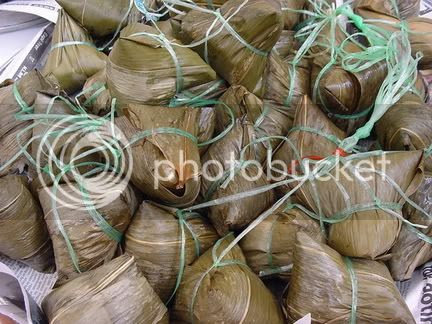 My aunt's dumpling unveiled! Some Hokkiens put dark soya sauce to make their dumpling darker and they have lots of dried oysters as it is fatt (Chinese for good luck). 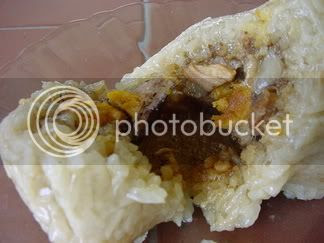 Nyonya bak chang's yummy insides revealed. Traditionally the dumpling has a bit of blue rice coloured from the butterfly pea flower but nowadays people use blue food colouring instead. 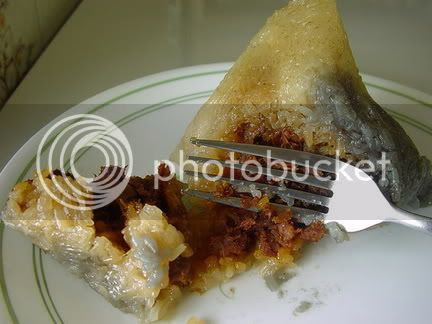 Besides these dumplings my favourites are the Kee Chang made from alkaline water and glutinous rice which you can get plain and with red bean fillings. I love them plain as you can eat them with gula melaka (Malay for palm sugar) syrup or kaya (egg custard). The best Kee Changs I have tasted are the tiny ones they sell in Haadyai which come in big bunches. The Kee Changs taste nicer in Thailand as the glutinous rice grains they use is of better quality than the ones found in Malaysia.

I have a really strange habit of eating my dumplings, I always have it with a spoonful of sugar. Not sure why or whether there is any tradition to it. Nowadays, I sprinkle just a bit to add some sweetness to the dumplings.

Can I have the lady's contact number in SEA Park who makes the dumpling? I love special home made dumplings. my email tthiny@yahoo.com. Thanks.