Ever since I studied in England, I always associate Fridays with fish. This is because during my first year in university, I stayed in catered halls of residence and they had these little English traditions; fish, chips and peas on Fridays, roasts for Sunday lunch and a cold meal for Sunday dinner. My hall of residence was also quite unique as we had sit down dinners at 6 p.m.. This meant that you had to be on time for dinner or else no food and you sit at tables with 6 to 8 people. For the first few times, I was always stared at as I ate too slow compared to my English counterparts so I had to learn to eat quickly so they could clear for the next course. I must admit that after a few months of eating fish on Fridays, I got so sick of it and I used to skip Friday dinners and opt to go out to eat a curry instead.

Since it is Friday today, I thought of posting something about fish. I had this a few days back as my mum had bought this fish in the market. Don't ask me what kind it is as I am hopeless in identifying fishes! That is part of the reason why I rarely buy fish in the market. Another reason is Splashie Boy hates fish with bones!

As per my mum's instructions, she said this kind of fish is the frying type and not the steam kind. Pretty simple stuff to fry up, just make sure your fish is dry and sprinkle some salt over both sides. Then heat up your wok and put some oil in it. Make sure your wok and oil is smoking hot before you put your fish or else the skin will stick to the wok. This time round, I got it right and my fish came out perfectly. Earlier, I had shredded some young ginger which I had deep fried so I sprinkled some on my fried fish. The sauce is just a mixture of black soya sauce and water which I heated up in the wok with a bit of the oil to loosen it up. I always prefer the tail side as I am hopeless in eating the fish head. 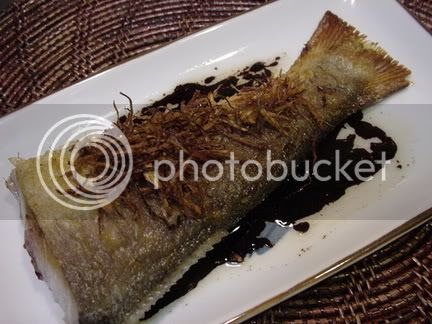 it looks so homey and delicious! i miss my mum fry fish too...