KiCkInG Up A StOrM aT tHe CuRvE

Recently we had a semi-girls night out with my old college buddies at the Curve, Mutiara Damansara. Originally called the Kicking Five (as there were five of us studying A-Levels) the group has now expanded to the Kicking Five Plus One. The additional "One" is Ms. P; although she did not study with us, we all used to hang out with each other as she is Ms. C's cousin from Johor Bahru. The kicking nickname started out when one of the girls who used to kick her boyfriend in class to get his attention, not sure why but that name has stuck throughout the years.

After A-Levels, we all split up to different universities in England, except Ms. C and I as we ended up in the same place but studying different courses. We kept in touch throughout the years and to date, only four of us are in Malaysia while Ms. D is happily married to a Kwai Lou (Chinese for foreign devil) in England and Ms. C is still partying away in London looking for her flamenco partner. The get-together was to celebrate my birthday (pretty late but hey, it's still a celebration).

As the Curve is relatively new and most of us have not been there, we decided to try it out at the suggestion of Ms. J. Since I was not sure what is nice to eat at that place, Ms. J suggested Kafe Ceylon Hill since she has eaten there before. The restaurant is a branch of their main restaurant in downtown Kuala Lumpur set in an old bungalow. The menu is mainly local favourites and fusion food - kinda like the food that Bon Ton made famous long ago. For the non-KL-lites, Bon Ton is this restaurant set in a colonial bungalow where they serve fusion food, local food and yummy desserts. People go there for the atmosphere as the place is nicely done up in a rustic way. It's also a popular place for romantic dinners, not that I have had one there before as I usually go there for family dinners.

The place is quite dim, so I had to use my flash or else the pictures will be all black! On to the food, either Ms. P or Mr. P had the Black Pepper Udon. Not sure which dish was theirs as they both ordered similar stuff. Think this is Mr. P's, he said the food was okay. 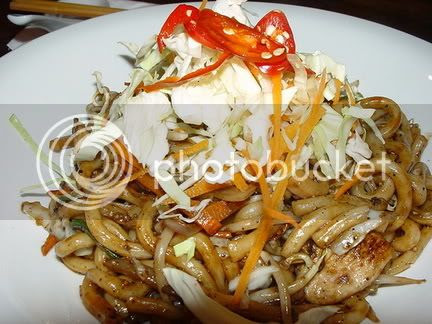 Ms. MY and I had the laksa; it's supposed to be a mix of Malacca and Singaporean laksa per their description on the menu. I have not had Malacca laksa before but I have tried the famous Singapore laksa in Katong so not sure if that truly describes this version of laksa. I thought this version was a bit unusual as it was too thick. There's not much ingredients in it but it's chockful of laksa leaves instead which I kept picking out. Sorry about the partially lit bowl as I took my own so I forgot to angle the camera away a bit. 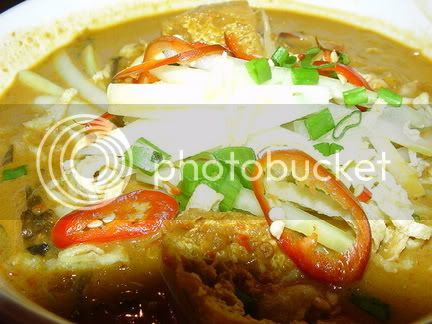 This is the fried Loh Shee Fun (Chinese for rat tails), which is rice noodles shaped in rat's tails that they fry with chicken and prawns. Ms. P had this, she said the taste is so-so and Souled Out at Desa Sri Hartamas does a better version of this. 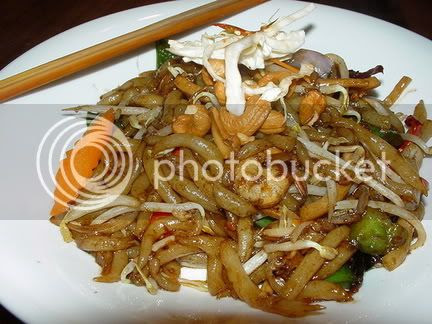 Ms. J had the Spiced Lamb Shanks which was yummy and really tender. I guess we all should have picked their fusion stuff since they did this quite well. 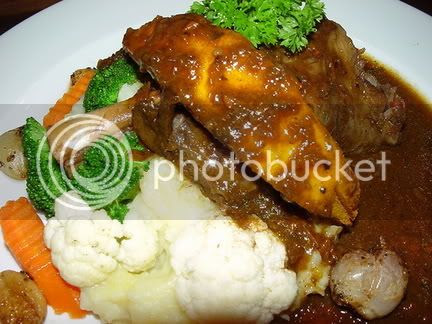 This is the fried bananas with ice-cream that came with the lamb shanks as a free dessert. It was super yummy and not too oily. 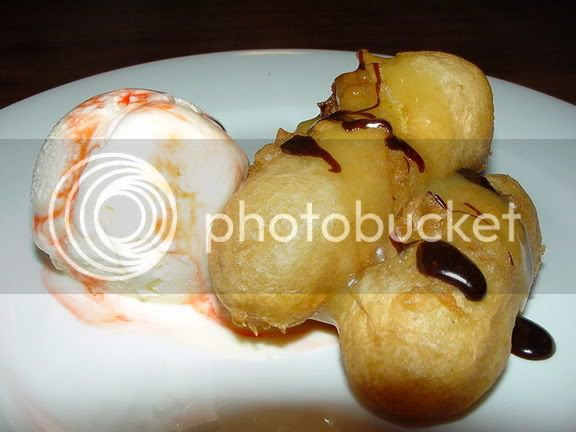 We had cake (I think it's a Tiramisu) for dessert! - a yummy one from La Patisserie Opera at Ikano Power Centre. Contrary to their french sounding name, it's actually a Japanese bakery. The cake is pretty light although it's full of mascarpone cream. 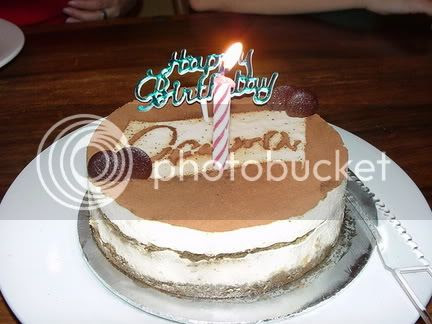 Thanks for the yummy dinner, cake and pressies, gals and guy. It was a night to remember as we got to catch up on old times and argue about house lot sizes. Guess the next time when I am at the Curve, will try the fusion stuff at Kafe Ceylon Hill since they seem to do it better than their local dishes.