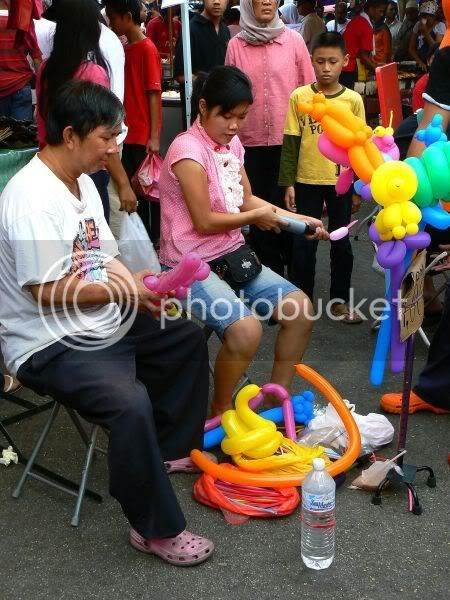 To make up for the lack of Ramadan Bazaar posts, here's a picture heavy one we did on Taman Melawati. My first time visiting here and this place is excellent - lots of stuff I've not seen before and the aromas from the food was so irrestible. This bazaar also gets thumbs up for friendliness as people were so nice whether it was the vendors or even the people frequenting the bazaar who were telling what was good to get. There were so many interesting stalls like this balloon couple who were busy making animals and teddy bears from balloons for the kids. Saw them make a cute little umbrella for two girls who left the stall looking so happy. 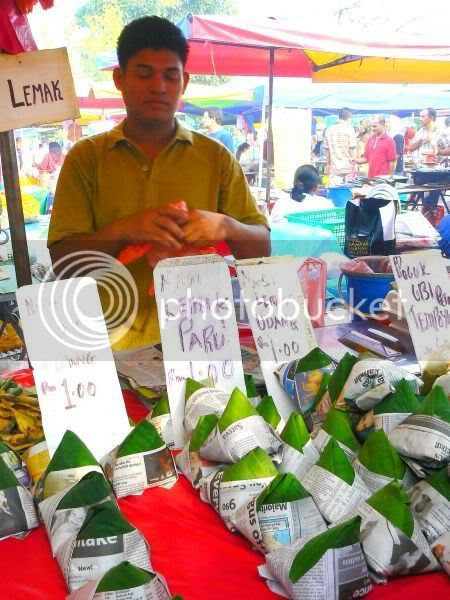 I spied this stall which was selling an assortment of packed nasi lemak. There's loads of varieties which was all going for RM1 per packet. 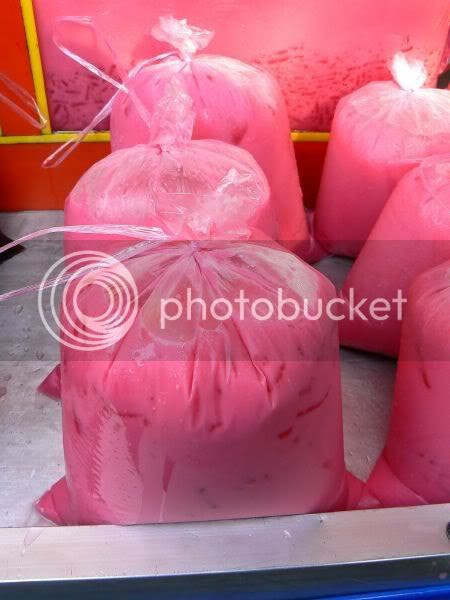 This is for Cat Cat who wanted Air Bandung - the sweet pink drink where they mix milk and rose syrup to get that colour. Some times they add jelly bits in it to make it cooling. 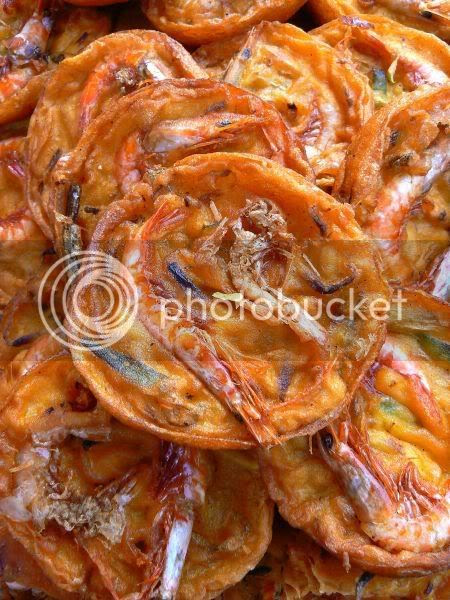 How about some cucur udang? These were all stacked beautifully with small prawns in the batter. 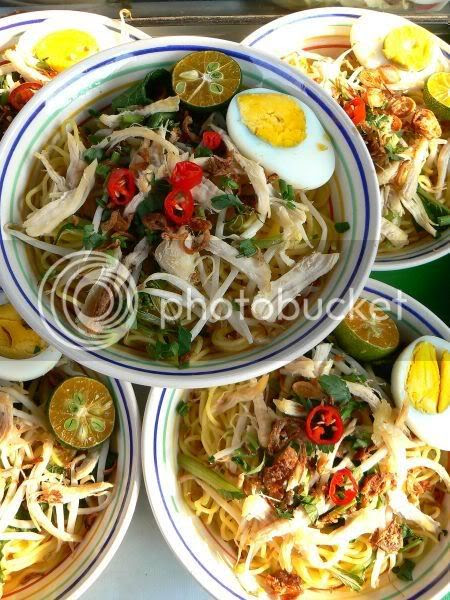 This stall was selling Sarawak Laksa and Mee Kolok which was pretty unique among the stalls. 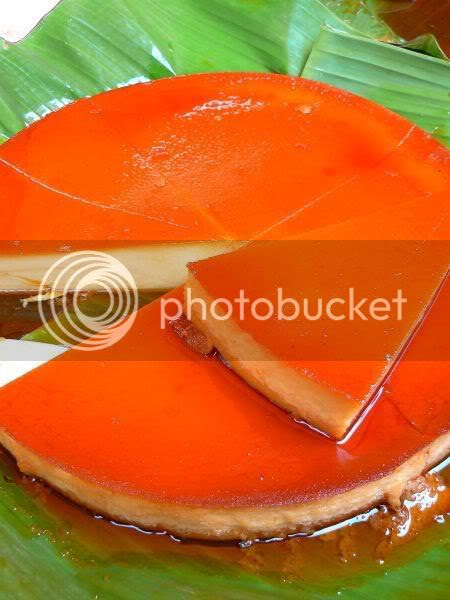 We noticed lots of stalls selling this particular item - Creme Caramel. All of them looked good - super smooth and with a lovely caramelised brown top. We got two slices and it was delicious with a smooth texture and not too overly sweet caramel sauce. 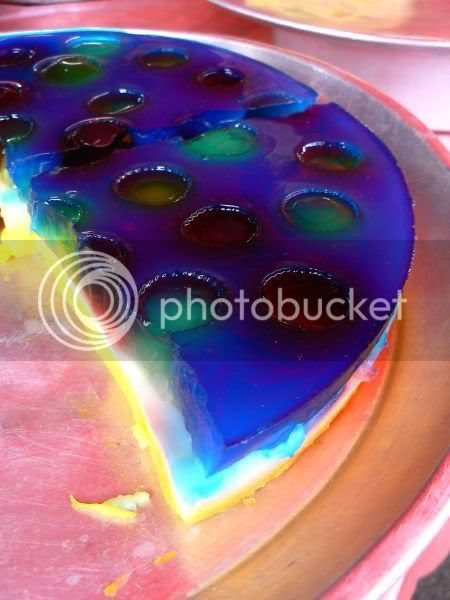 There seems to be quite a lot of agar agar stalls in almost every Ramadan Bazaar we go to. I liked this one which had 2 layers agar agar. One layer is a fruit layer like kiwi, strawberry while the bottom one is just plain yellow. 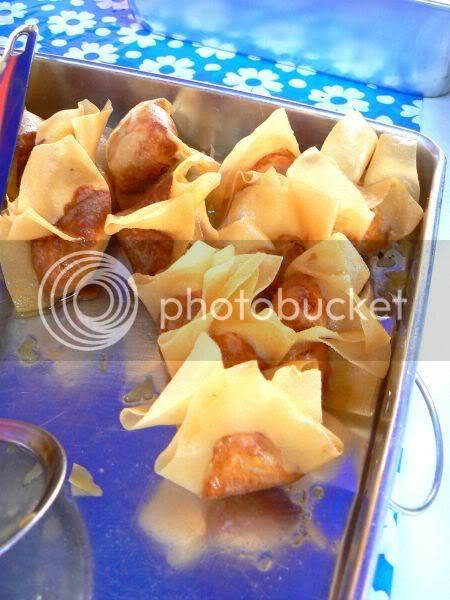 Something unusual - fried wantan Chinese style being sold in a Ramadan Bazaar. 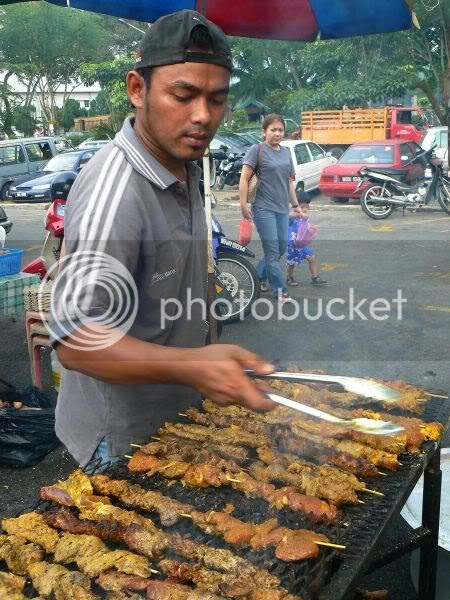 This was also unusual - daging salai bakar. The meat is marinated and skewered. Then it's grilled and slathered with a percik sauce made from coconut milk. 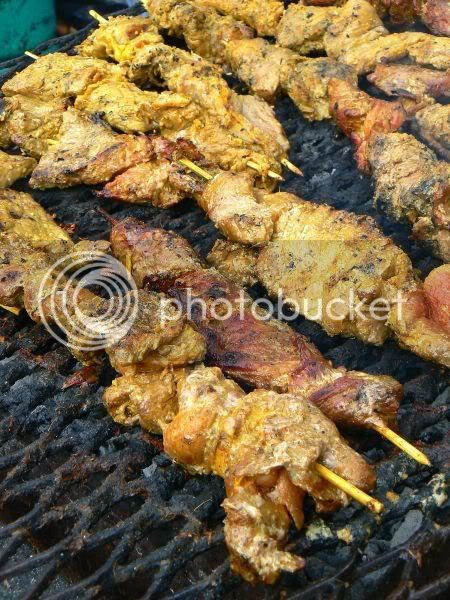 It smelt so good we bought a skewer to try. The beef was good - well marinated but some bits were slightly chewy probably because of overcooking on the charcoal grill. 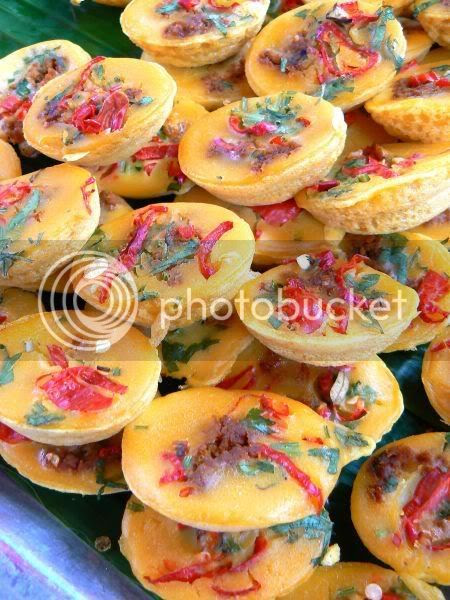 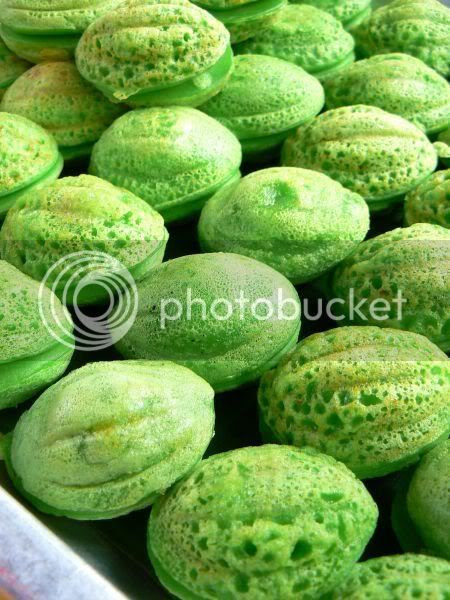 These are the sweet varieties - Kuih Cara which has syrup within. Don't they kinda look like alien eggs? 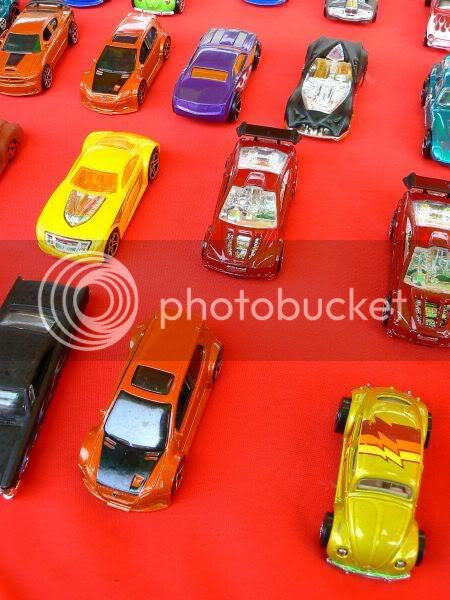 Something unusual - a stall selling Hot Wheels cars. They were going for either 2 or 3 for RM10. Definitely will appeal to the kids. 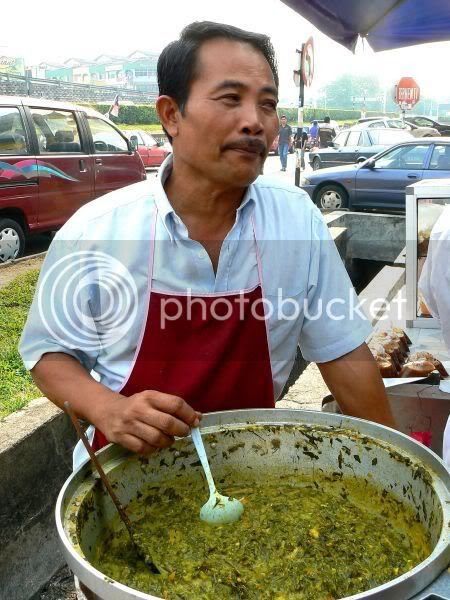 This stall owner was super friendly and selling a dish I have not seen before - Pucuk Ubi Tempoyak Petai. 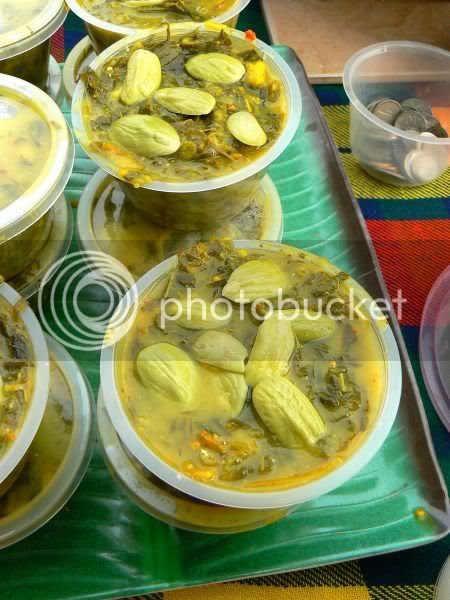 Daun kaduk, daun labu, pucuk ubi and etc is used for this dish . Petai or stink beans are also added into this. This dish is popular with people in Pahang, Negeri Sembilan and Perak. 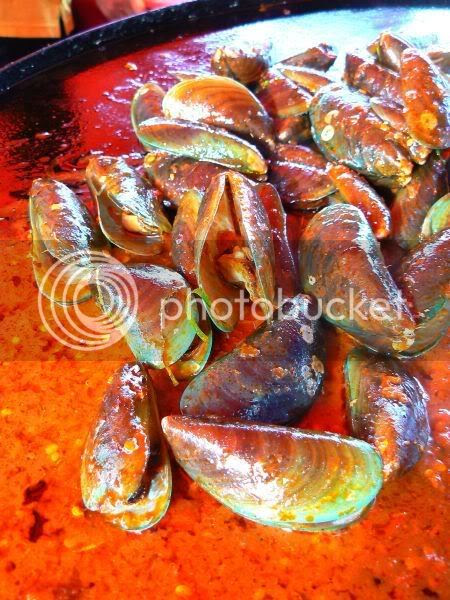 This is from the Nasi Beriani stall run by the Mazia Catering. Usually I see cockles and lalas, first time seeing Mussels being used. These are local mussels hence not as big as the New Zealand green lipped ones. Aside from cooked seafood, this stall sells rarely seen Johor specialties like Botok Botok (steamed fish with herbs and leaves) and Nasi Ambeng. Originating from Jawa, Nasi Ambeng or Nasi Ambang is usually served in weddings and presented in dulangs or trays where everyone shares the food. This version here had a bit of everything - fried meehoon, rice, a piece of fried chicken with curry leaves, fried tempe, fried ikan bilis, brinjal, french beans cooked with foo chook (bean curd sheets) and kerisik. It's a lot of food for RM5. When the stall owner saw me snapping pictures, she was very sweet and packed a portion for me to sample. Despite me asking her to take my monies, she refused hence I ended up having a pack of Nasi Ambeng to take home. I tried a bit of it since I had dinner plans already and the fried chicken got my thumbs up as it has these addictive coconut bits. 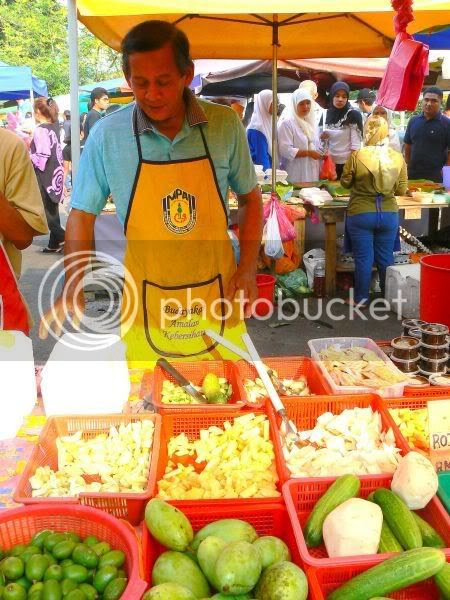 Usually I see rojak stalls but this one had such a lot of cut fruits all laid out to be mixed as and when with the rojak sauce. 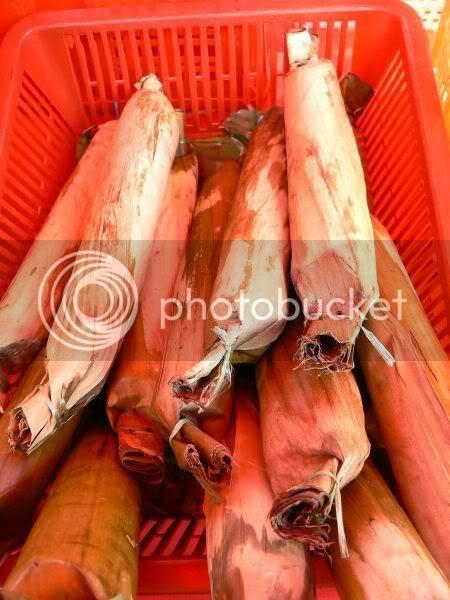 Felt like a country bumpkin as my first time seeing Lontong wrapped like this - the compressed rice cubes are used for Lontong which is mixed with mild curry with vegetables, tempe and black eyed beans. I also spied Tapai Pulut which looked good that a few ladies was asking me to get. Definitely great with cold ice cream. 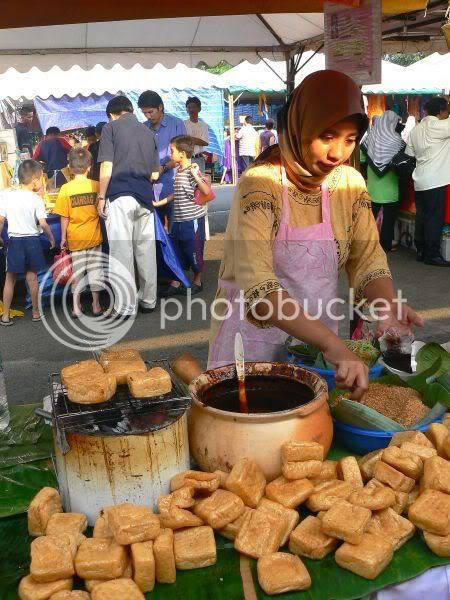 Besides Creme Caramel stalls, the other popular choice is Tauhu Bakar as there were like 3 or 4 stalls selling this. 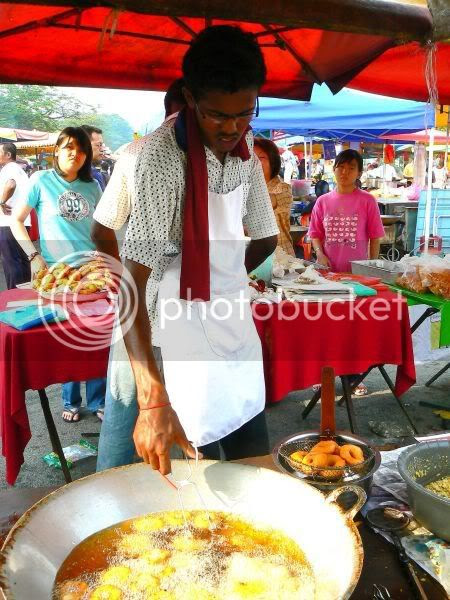 Seems to be quite common around here - there were two stalls selling Vadai. One fella was even shouting Vadai, Vadai to attract attention. 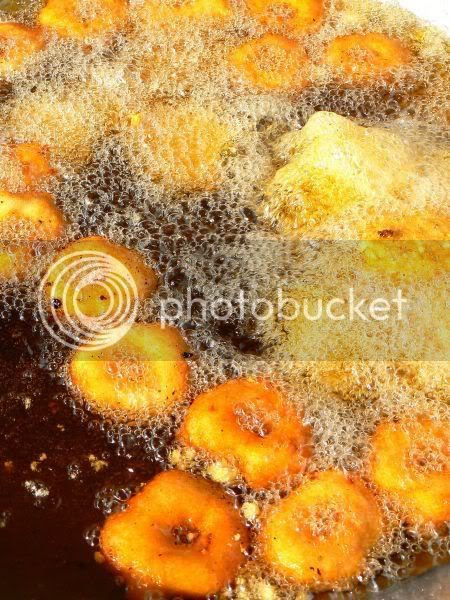 They kinda look like doughnuts but are soft and made from dhal flour. Very nice with bits of curry leaves in them to give them a spicy kick. 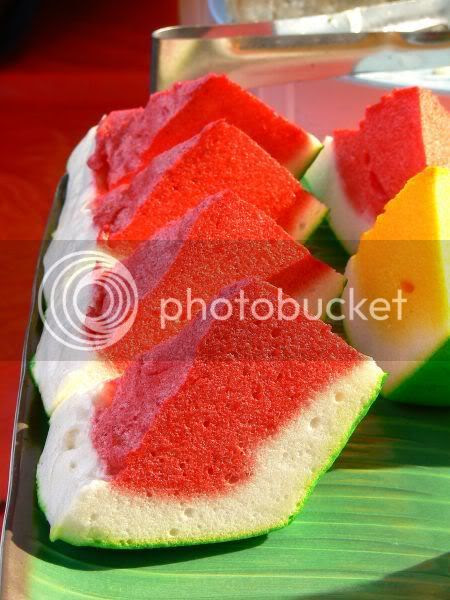 I went WOW! when I saw this - agar agar shaped like watermelon. She had 2 varieties - a yellow one and a red one. The texture also looked slightly spongy like the watermelon. 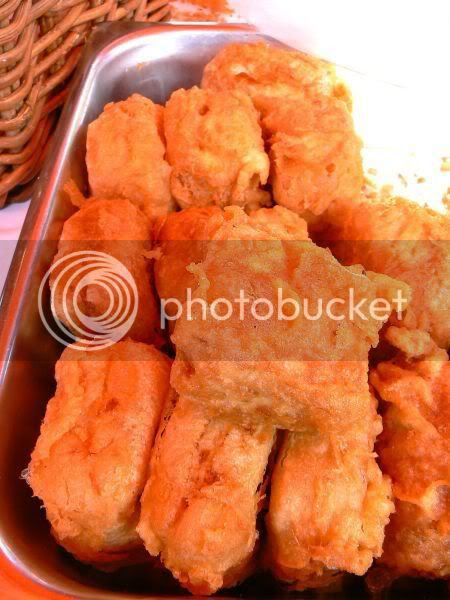 We tried this Tauhu Anora since it was so unusual - tofu coated with a batter and deep fried. 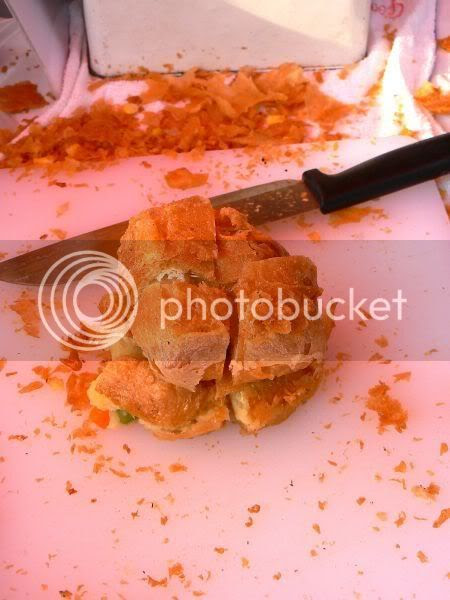 It's RM1.30 for one tofu and it's stuffed with a mixture of potatoes with mixed vegetables. You don't get a lot of mixed vegetables. After they cut it in pieces, they also add crispy bits of batter. You're given a sweet but slightly spicy black sauce to dip the tofu in. Tasted really good and made a very substantial snack. Only problem is the outside is not crispy anyone as it had been pre-fried and kept in containers at the stall. I guess that is why they gave us crispy bits. 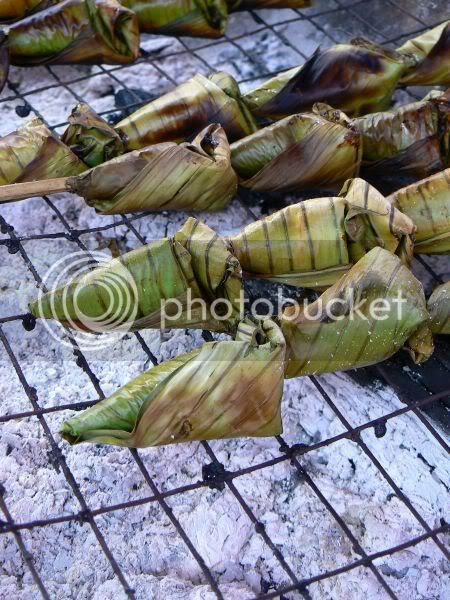 Last but not least, a picture of Sata, the Terengganu delicacy over hot coals. It's filled with a minced fish paste with grated coconut.
We really liked this bazaar - food looked very tasty and there was so many unusual choices. Worth the drive here but can only do this during the weekend. There were loads of people around so parking was a problem.
Ramadan Bazaar Taman Melawati
Along Jalan Bandar
Taman Melawati
Kuala Lumpur
(If you are driving from Ampang on MRR2, take a right turn at the Taman Melawati exit. Take a right at the traffic light and go across, the ramadan bazaar is on the left hand side. People tend to park on the side of the road leading to the stalls.)
Tagged with: Malaysian Food + Ramadan
Posted by boo_licious at 8:34 AM

Wow, loads of things to send over to you!

My colleague did once the watermelon jelly. It's spongey cos they use egg whites and she even used cincau as the seed.

Parking at this particular bazaar on weekdays is a problem too. There seemed to be a good variety this year. Last year there were many stalls selling lauk-pauk, so didn't like the bazaar. It is customary for the Muslims to break fast with 3 rutab or tamar or water (as practised by the Prophet Muhammad s.a.w). Muslims are also encouraged to break fast with something light and sweet before having a meal. That explains the many kinds of agar-agar you find at Pasar Ramadhan.

the watermelon...^O^
at a glance i tot that was some seedless watermelon ~ :P

wow...thanks for all the photos..looking at them makes me salivate.The photos...do you ask the peddlers' permission first?cos I always want to take pics at street stalls but too shy to ask.

Now this is what I call Malaysian food! It's a learning experience as many of the foods aren't available during other times of the year. And all at one place too. Tourism Malaysia should promote this as one of the highlights during the Ramadhan month. Beats hotel food any time!

wowowow the variety of food here looks fantastic! That watermelon agar-agar is so fun! I must, must go visit!

boo... you put me to shame, I live near the area and have not ventured to the Ramadan Bazaar. Your pictures are so enticing that I must make it a point to visit it.

On another note, I've always marvelled at the clarity of your photos, Do you mind sharing what camera and setting you used to take those pictures at the bazaar?

god. tell me those hot wheels are not edible *grin* btw are they the ones which change color when u leave them in the fridge for some time? i loved them when i was younger ;p

wow!many delicious variety of malaysian food...never been to a ramadan bazaar before....will visit one near my place after this..

at last, u made it to taman melawati. so many food to taste yet too little stomach. hehehehe. i'm a regular to this bazaar ramadhan and i have tried almost all the food you pictured. daging salai tu memang kena pilih sket, kalau tak akan jadi chewy. heheheh

RM1 for that pack of nasi lemak? that's like.. really cheap. Man, I miss those prices. The air bandung-havent hv that in years! Great pictures as usual. very mouth watering!

thxs for the tip skyjuice7. We got there early and parked away from the crowds and walked. Made sense or else get caught up with the others.

junkgirl - this bazaar is really good, lots of food I have not seen before.

kat - LOL, I'm not a fan of the buffets though. Too many people cramped in one small space and fighting for food.

teckiee - hee hee, they had quite a lot of disco varieties.

paprika - it's actually very easy to get here since it's just off the highway. Try and make it as it's really worth it.

jaded - hope u make it to the bazaar. Very good stuff. I use a point and shoot - Lumix FZ7. No special settings, just the normal ones.

jun - gosh I didn't know they had those types! I think these are ordinary ones just to entice the kids to ask their parents to get some.

sweet jasmine - hope you will as it's good to see the variety of food.

knizam - ah, nice bazaar you have here and I'll take yr advice to choose the daging salai next time. I saw lots of caramel pudding stalls, wonder if the one with the blue jelly is the special variety you mention?

daphne - RM1 is technically not cheap, seen some which are only 60 sens!

aaawww...u makin me feel homesick. i (used to) live in tmn permata. fasting abroad aint that great coz you miss out on all the pasar ramadhan... i'm hungry now...

I've been living in Taman Melawati all my life and I never been to the Ramadan bazaar once :( Too many people but after reading your entry, maybe I should give it a try before it ends. Thanks for the review.

thanks for the brilliant review cant wait to go there. and thanks foer the info thst threy sell mee kolok, was looking for it

thanks for the brilliant review cant wait to go there. and thanks foer the info thst threy sell mee kolok, was looking for it