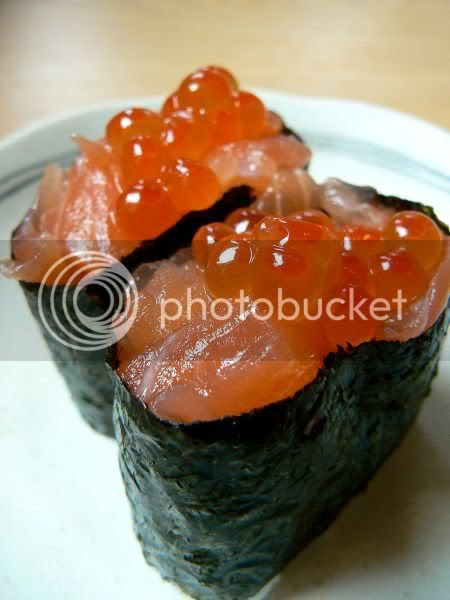 Yikes! I just realised it's almost two weeks since I posted anything on Japanese food. Okay, I must take my role as Secretary for the Japanese Food Kawan Association more seriously. Here's a redemption post of this place we discovered recently. Note that the pictures were given the nod of approval from El Presidente.
Although I rarely venture to Sunway Pyramid, this place has definitely given me a reason to re-visit it again. Since I was not too familiar with the place, it took me a while to find it since it's located at the outer area of the mall, on the Oasis Boulevard. At first I thought it'll be a cramped up kaiten (conveyor belt) place but I liked the spacey layout of it. We could sit at booths with comfy chairs to enjoy our meal. Service is also very fast and you can see how they prepare your food as it's an open kitchen concept. 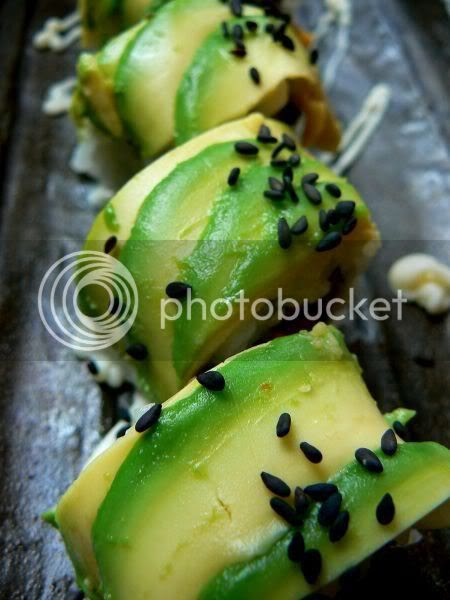 One thing I noticed about this place is their love for Ikura - that slightly salty salmon roe with it's signature reddish and slightly transculent colour. You can have a bowl of it for appetizers and even as a topping for your chawan mushi. I went for a more traditional manner of Salmon Ikura Sushi (RM4.80) where it was paired with pieces of salmon sashimi on top of sushi rice in a shape of the battleship sushi. Excellent stuff and I wished I ordered more of it. 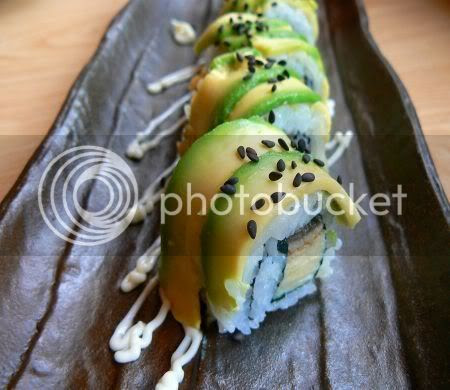 Next was the Caterpillar Roll (RM12.80) - a wondrous combination of melt in the mouth green avocado slices topping a maki made from eel and tamago (omelette). See the first picture of the roll, Splashie Boy took that which I thought was really good as you could see the jade green avocado pieces. They also do a few unusual rolls here and what looked so good in the menu was their Wasabillar Roll which is topped with green wasabi flying fish roe. 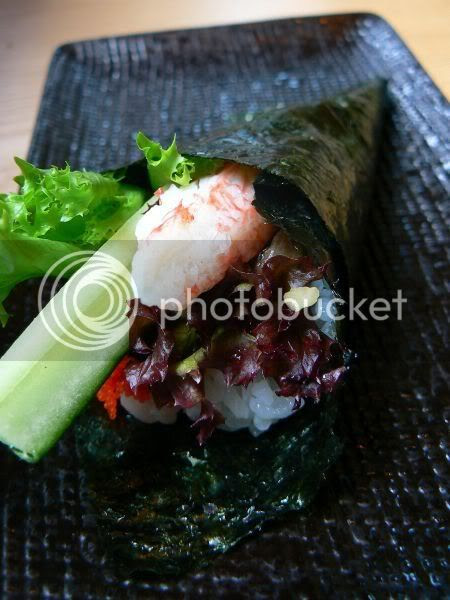 They serve a few varieties of Temaki (Hand Roll) here and if you love Ikura, they even have a temaki served with this item. We tried their California Temaki (RM4.80) which was pretty good and came with a piece of crab meat. Only problem would be the crispiness of the seaweed (nori) could have been better as it was slightly chewy. 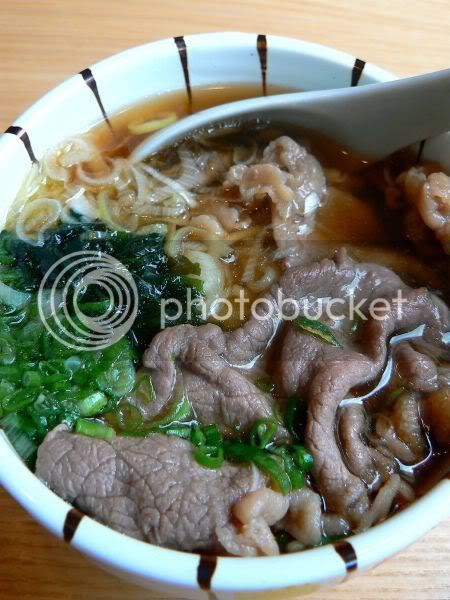 If you want something hot, go for their noodles. You can either have them in full meal sizes or just a small size for a snack to eat while you indulge in other items. The Niku Ramen (RM10.80 for small) was good stuff and filled with thin slices of tender beef. I also liked the sweet soup which accompanied the ramen noodles. 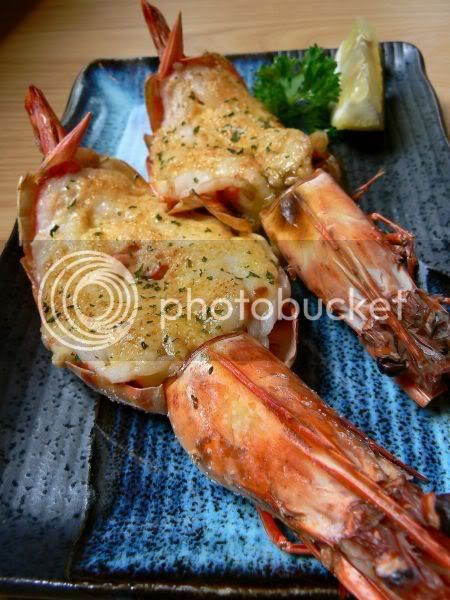 The grilled items are also good with Hotate (scallop) and even crab served here. We settled for their Ebi Mentaiyaki (RM12.80) which was grilled prawns topped with a creamy mayonnaise topping with salted cod roe. Really good stuff which was finger licking good. 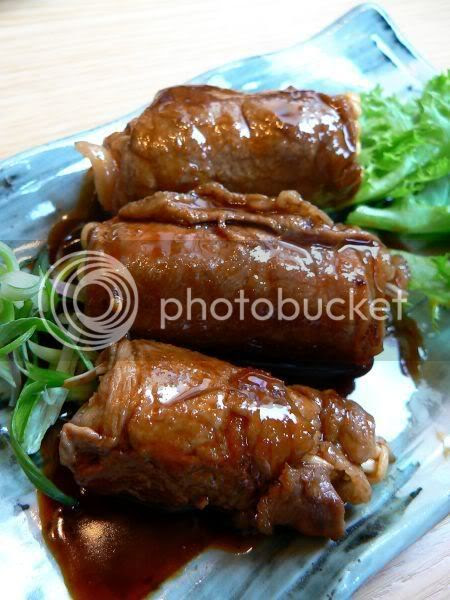 Next was their Gyu Enoki Rolls (RM12.80) - beef slices encasing enoki mushrooms and drizzled with a sauce. It was good stuff and I liked how I could taste the mushrooms and the tender beef. 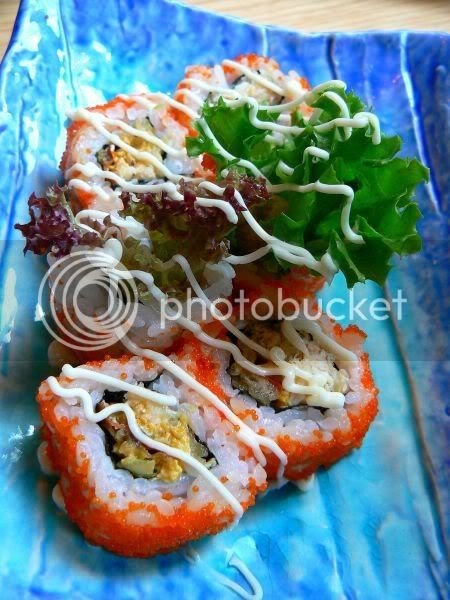 We also ordered their Soft Shell Crab Maki (RM6) which looked really pretty on a bright blue plate. However, I was dissapointed with it as I couldn't taste any soft shell crab within it. 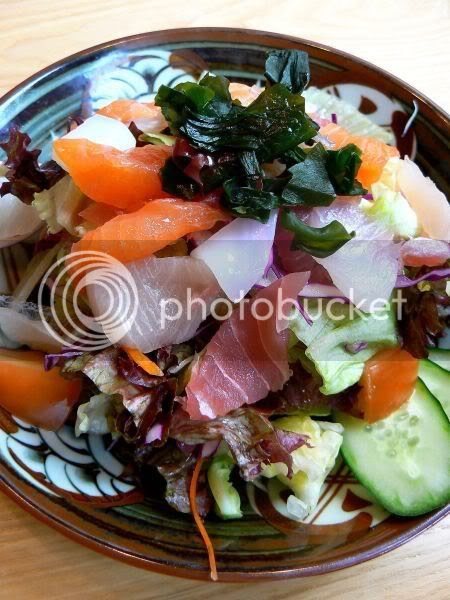 For veggies, we ordered the Sashimi Salad with Wafu Dressing (RM12.80). I expected more sashimi slices within this salad but was dissapointed with the portions served. Tastewise, it was pretty good especially with the slightly tangy Wafu dressing.
We also ordered dessert - yummy Yuzu Sherbet (RM6). Cool and refreshing, it was a great way to end the meal. Most of the desserts in the menu are actually from the next door neighbour, Shojikaya. Overall, I liked this place and wouldn't mind bringing more of the association members here to sample the food. Even though it's a kaiten place, I liked the booths they had set up on the side.
Sushi Zanmai
Lot OB2-F1, Oasis Boulevard 2,
Sunway Pyramid 3
Jalan PJS 11/15
Bandar Sunway
Petaling Jaya
Tel No: 03 – 7492 3080
(Pork Free. Open from noon to 11.00 pm on a daily basis)
*Disclaimer: The opinions expressed here is entirely based on my personal tastebuds and may vary for others. The reviewer also declares that she has not received any monetary or non-monetary compensation from the restaurant for writing this review.
Tagged with: Japanese Food + Ikura + Sashimi
Other reviews:
Posted by boo_licious at 12:50 AM

YUM, Hand Roll (Temaki) is always my favourite. Had some awesome sushi while visiting my sister in Hong Kong. Very close to those you get in Japan.

Boo_licious-san, you have done well. The sashimi salad is gorgeous! I wouldn't mind trying that. And the ebi mentaiyaki...sinful! Good job, good job!

oh no, I'm pressured! gotta make my contribution soon haha...the pricing looks reasonable. But i hardly go to the sunway area. Traffic is horrendous :I

may i know when can i get an appointment for a position or admission to JFKA??

i think the seafood salad is ok for 12.80..rakuzen version is 20plus .. cant compare apple to orange la..

Eh how come you did not inform me about this maki tasting session? I am after all, HEAD OF MAKI! hahaha. The colours in the pictures are gorgeous! That caterpillar roll does look impressive though. Too bad wild horses couldn't drag me to Sunway Pyramid!

oh.. my friend recommends me to give this place a try months ago but no chance yet :( heard da sushis are real good here!

That reminds me that I should also post about Jap food or else i might be demoted or worst, kick out!

hey! one of my mom's friends took me to this place too this time i went home, and i must say tht it's reli-- as u put it-- good stuff! apparently it's own by the same company tht does rakuzen, but of cors, this comes w a cheaper price tag :)

Ya lor...all you JFKA committee and lifelong members...get cracking. *whip*

xiu long bao - oops, no pressures! Just eat as and when u're hit with the urge which shld be like every wk?

joe - president san deals with new members so you will need to liase with her.

paprika - Yeah, I rarely venture to the pyramid hence I was very lost getting here.

meiyen - ah, you should try when you have the time.

precious pea - who dare kick you out? Oh yah, do post as I want to drool over Wagyu Beef Don again.

jun - wow, so many places which they own now. This one is good.

*shaking with fear* when is next session president san???

Soon soon, maybe Monday since i already finished with all the posts on Macau. :)

looks cooool. hey, is this place at the new sunway pyramid extension??? is the place buzzling alrady? if it is, i must make a trip, was briefly involve with the project last time...lol.

ktx - I think this is the old part still. The new part looks like it's still under renovation but I'm too sure as I rarely venture here.

this place is nice~~ I went back for their sushi promo again last week! cheap. cheap! haven't post on it yet though..will write on it later on..
wow... u tried lotsa dishes huh.. good good!

wow, they had sushi promo. Sounds good. I liked the food, didn't feel like a conveyor belt place with pre-made items.

yummy, the photos are so wonderful, the food seem almost real enough to taste right from the screen.

whaleshaman - I'm sure taboo would like some raw salmon or tuna as that will entice her to come out from her hidey hole.