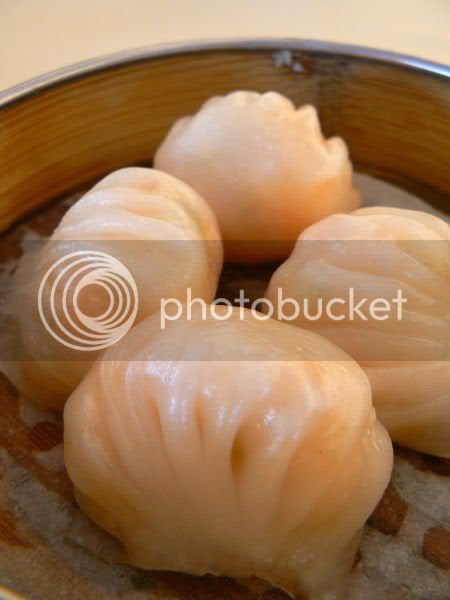 Shrimp Dumpling (Har Kau) - RM7.80++ (Half price - RM3.90++)
Nope, you're not experiencing double vision today! It's another dim sum post for the second week running. Last week when my friend saw the King Crab dim sum write up, she called me to give this place a try - Ah Yat Abalone Forum. Since I've not ventured here before, I was game for a bit of dim sum during lunchtime. No sinful fried items this time round though as she was suffering a bit of sore throat. Parking here is quite a breeze as there's ample space available at their underground area even though they share the premises with a Japanese restaurant and Unique Seafood. 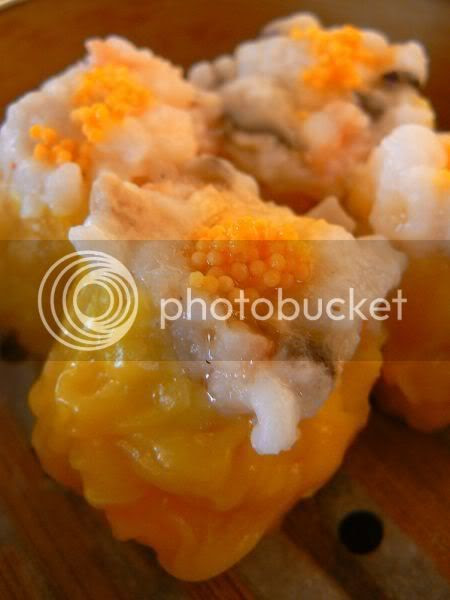 Pork Dumpling (Siu Mai) - RM7.80++ (Half - RM3.90++)
The restaurant area is huge, with no columns making it perfect for wedding dinners. Surprisingly it was packed even though it was a weekday. They're currently having a promotion - 50% discount during the weekdays and 30% discount during the weekends for their dim sum items. Here the dim sum items are all dainty versus big chunky ones. The Har Kau and Siu Mai was served in four tiny portions versus three bigger portions which makes it easier to eat it in one bite. What I liked about their dim sum was the prawns and meat filling was marinated with a mix of sweet rice wine giving it lots of flavour. The skin of the dim sum was also nice and thin. 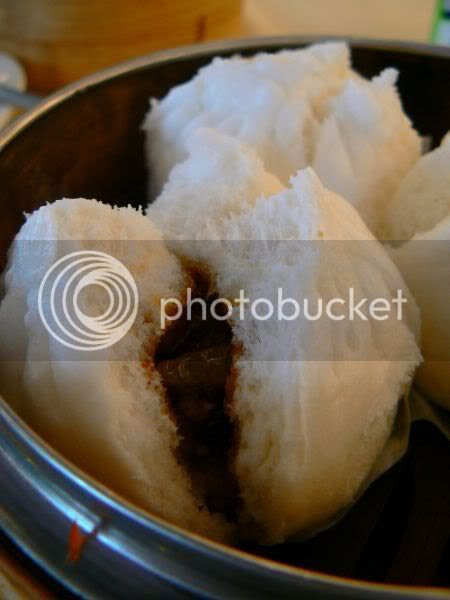 BBQ Pork Dumpling with Oyster Sauce (Char Siu Bao) - RM6.80++ (Half - RM3.40++)
They serve Hong Kong style dim sum here hence the dim sum dishes tend to be sweeter than what I have normally tried before. Their char siu bao was filled with chunks of fat though which will make anyone on a diet cringe. We both felt the steamed bao was a bit too sweet for our taste even though it was fluffy. 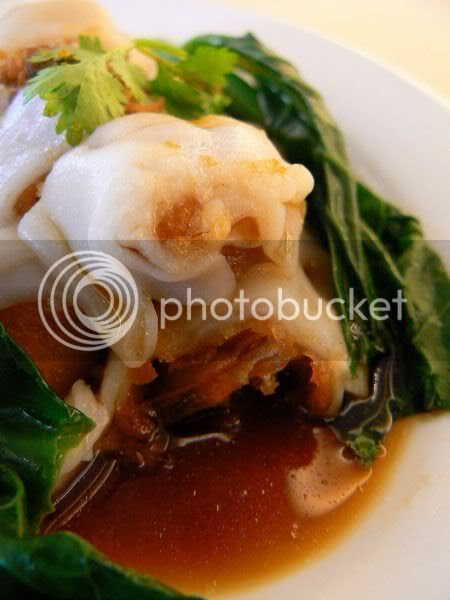 You Tiao Ricesheet Roll (Char Leong) - RM9.80++ (Half - RM4.90++)
We also ordered the Char Leong - the typical Hong Kong dim sum item. I thought this wasn't too good as the yau char kuai within it was fried too crispy till it was a bit hard. Totally unlike the ones I have eaten at Hong Kong before. 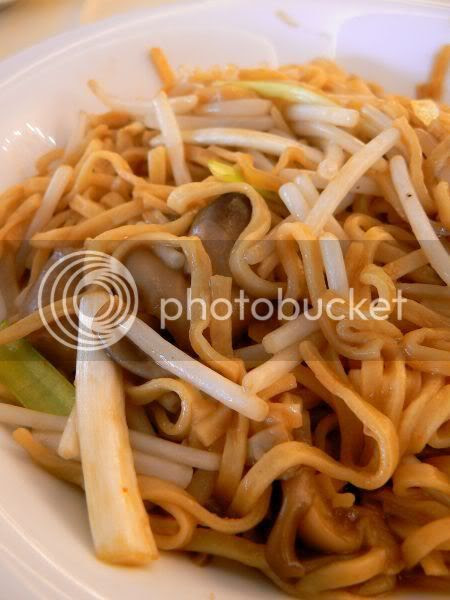 We had the braised Ee Foo Noodles instead of ordering more dim sum items. The noodles were quite nice with the noodles that remind me a bit of the type you get in your Hokkien Noodles minus the bounce. Also spied the next table having the Ah Yat Special Noodles which smelt so great. They fry it in front of you in a heated claypot and the aromas of the noodles were making me hungry. 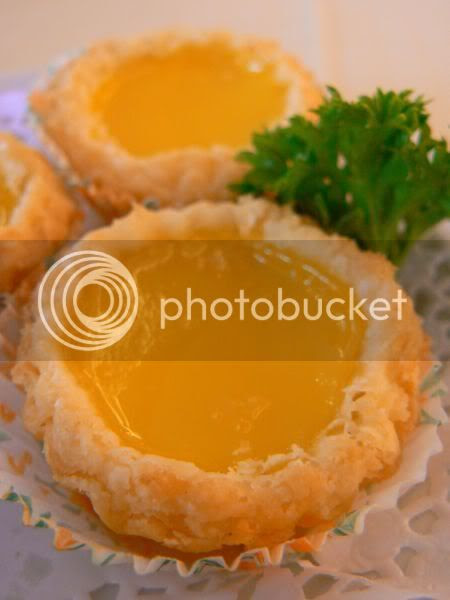 The best part of the dim sum lunch were these yummy egg tarts. Mini ones with flaky pastry and a wobbly egg centre, they tasted so good piping hot. I tested one when it was cold and it tasted just as good.

(Non Halal. They also have outlets in Genting Highlands and Swiss Garden Hotel.)

Other Dim Sum Reviews on masak-masak:

heard abt the existence of char leung here..but from the looks of that pic..errr..i think i might give this a skip..the 50% disc really makes this meal quite affordable though..

DimSum Fever! I had dim sum at China Treasure in Sime Darby Convention Centre yesterday. Although it's halal I was totally amazed! VERY VERY nice especially the Chicken Char Siu Bao. You can't even tell the difference.

joe - the char leong at Bonny's Kitchen is much nicer.

precious pea - LOL! Yeah, China Treasures is yummy. I like that sweet potato puff and their egg tarts there.

boo,
You are really a big fan of dim sum ya... I also love dim sum very much. Dim Sum here is not as good as in Malaysia but the best is in Hong Kong - mo tak thing.

i've been here and the food is good.

I miss delish "har kau". Those with thin and soft skin...with fresh prawns filling inside.

I like the siu loong bau there, thin skin and delicious soup.

Oh gosh ... the egg tarts look fantastic....furthermore with those flaky crust .... I just love egg tarts... must try them !

been here for dinner, all good but not dim sum though.. da egg tarts look creamy!

hahhhhh another place with good egg tart. I think I'll go try soon.. want to try the dim sum with the wine in it.

The 50% deal has been on for a long long time already. I think it's kind of a permanent promotion now. :P

so close to my office but never get a chance to go there yet. usually just tapau some mamak food at the stall ... must go try their dimsum soon! thanks for the tips! btw, have you eaten in jaya33's oriental restaurant ?

am eyeing on the egg tart...

i've been travelling down kl for ahyat for a few years till recently, when they opened a branch here..the xiulongbao and scallop chee cheong fun are pretty good. and yes, promo is permenant..hehe

BBO - go during weekdays to try!

cat cat - HK dim sum is very good. Also good is dim sum in Canada and Australia as the HK chefs have shifted there.

angie tan - oooh, thxs for the tip, must try and compare as I love the one in King Crab. We didn't have any fried items as my friend had a sore throat.

cookies_cream - go try these ones! I like how they marinated them as they have lots of flavour vs the plain type.

char - they were so good, flaky pastry and soft eggy centres!

ling239 - must go back and try their fried stuff and all yr recommendations as so many I missed out.

daphne - hope u get to go Perth soon to fix that dim sum itch!

teckiee - such an alcholic! But it does taste nice as it's slightly sweetish.

tankiasu - I guess it is better to just say 50% versus normal prices since people will come for promo.

darren - go try this one!

lianne - nope, yet to venture into Jaya33. Was told that is Tai Thong? Not sure as not seen the place myself but only from the road.

new kid on the blog - no need to eye it, just pop one in yr mouth by going there!

sc - yippee, more things to try. Must go for 2nd time to sample all these recommendations.

wmw - dunno, this weekend or is PPea away for the weekend on one of her many trips?

Boo, I am coming down to KL next week. Maybe we can meet up and you bring me go makan makan :)

Hey there. I see you've gotten my link. Well, now I shall give you the exact one. I've changed my blogskin so there's no need to click on the L word of the L.O.V.E half hidden by the toolbar. =)

platinum girl - drop me and email and let's go try some chicken wings!

michelle chin - thxs for the link.