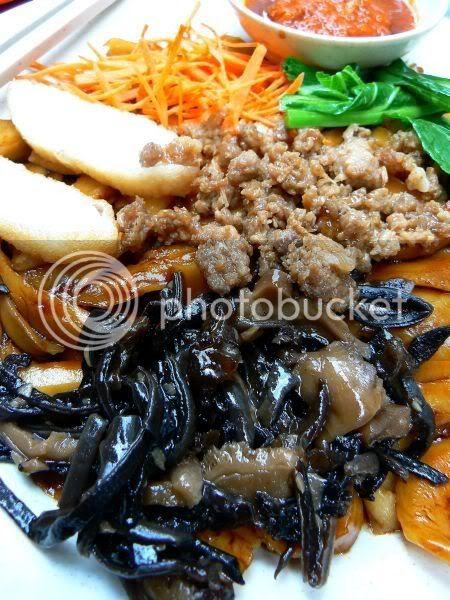 Lately, I noticed that some coffeeshops have acquired an international flavour to their offerings with food from China and even Vietnam. I discovered this particular place after my friend, S brought me here. The stall located at this busy coffeeshop is run by a lady from Harbin. She offers noodles like lai mian, the unusual knife cut noodles and dumplings. Depending on when you order your food, it can become quite slow as she's the only person manning the stall. 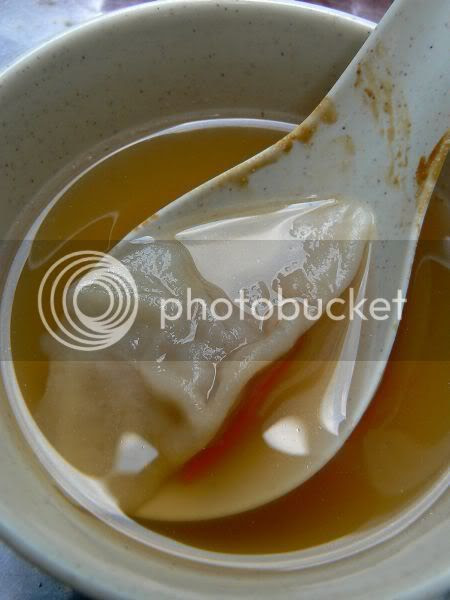 What I really liked was her knife cut noodles or what is known in China as Dao Shao Mian. Similar to our local Pan Mee or Mee Hoon Kuih, the dough is flattened into a longish shape and then sliced to pieces by knife. She makes two versions - a dry one and a wet one served with soup broth. Once the pieces of dough are cooked in boiling water, they get tossed in dark soy sauce for the dry version. It's served with shredded carrots, a minced meat mixture, shredded black wood ear's fungus and slices of fishcake. I prefer the dry version but my mother prefers the soupy version. What makes both versions so good is their chili sauce which has a slight tang to it from the addition of black vinegar. 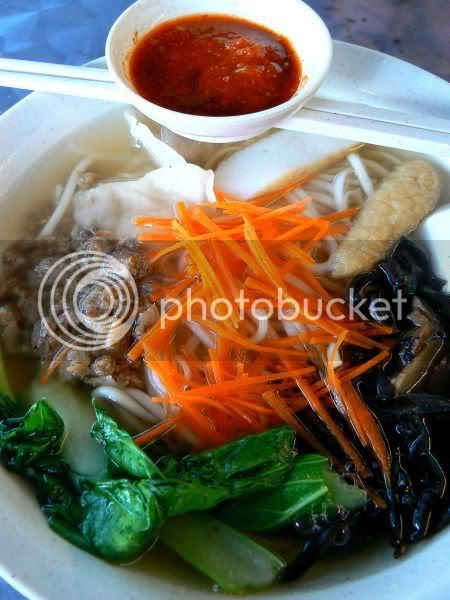 I've also tried her Lai Mian before which I didn't think much of. She tends to overboil her noodles making it too soft. I prefer mine with a slight bite to it hence the knife cut noodles with it's slight chewy nature is well suited to my tastebuds. Her dumplings can either be served pan fried or boiled. I've not tried them before but my friend does not think much of it either. Prices are pretty reasonable here and you can get a plate of noodles from about RM3.50.
Harbin Noodles Stall
Restoran Kam Heong
No. 8, Jalan Tengah
Petaling Jaya New Town
Petaling Jaya
(Non Halal. Open from 7 am to 2pm. Closed on every second Tuesday of the month. Next to the UOB Bank Berhad.)
*Disclaimer: The opinions expressed here is entirely based on my personal tastebuds and may vary for others. The reviewer also declares that she has not received any monetary or non-monetary compensation from the restaurant for writing this review.
Tagged with: Knife Cut Noodles + Lai Mian
Posted by boo_licious at 12:00 AM

LOL, so many places to go, so little time. Think u better start with yr char siu first.

Looks good. If it was similar to Pan Mee, then I definitely like knife cut noodles. Weird name though but will try if I had a chance.

Yeah, it has a weird name but then Pan Mee which is board noodles is also a weird name esp if u translate it from chinese.

Very interesting. The stall is located right at the back rite?

haha we saw her , but din try..
coz we remembered those haughty Harbinas...all da way at -10 degrees and thats not funny

These noodles look ching and healthy. I never liked la mian. Or maybe I don;t like the msg soup that comes with it! :-)

True to your advice, I went to my favorite bagel shop and grabbed me a poppyseed bagel with a platter of lox and smoked sturgeon =D. It's on my blog =P

Hi, found out that Sunday Star's Metro yesterday (12/08/2007) featured one of your old review. Another one on our National paper. Way to go boo_licious.

precious pea - yes, at the back and run by a sweet lady with rosy cheeks.

the team - LOL at yr Harbin gal story. I thought you ate it before since you asked about it last time when I blogged abt Kam Heong.

Paprika - yeah, that's part of the reason why I don't like the wet version of these noodles as I hate the soup broth. Give this a try, we all like it a lot.

D - drool drool! I love that combo - classic but fantastic.

Thanks Simon! Had a shock yesterday when I was slowly flipping the pages of the paper to find it in there.

They have this knife cut noodles in the Ming Tien food court in Taman Megah too. Stall operators are from China. The pot stickets there are quite nice too. Inconsistent with the oil...sometimes okay, sometimes on the oily side.

i saw that noodle from food documentary show in china. so hapy its in Malaysia now... i gonna try !!

wmw - I heard abt that place from my friend too. Is it open at night or during the day?

jackson - wow! Didn't know they're that famous. Give it a try when u're at this area.

wmw - thxs. I suspected so as most of those places are open only at nite.