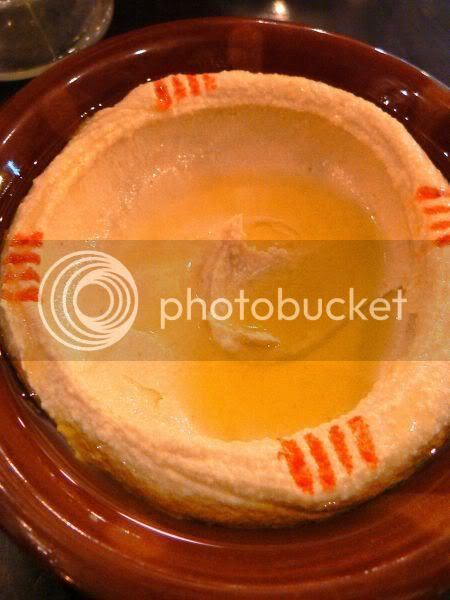 It often amazes me how diverse our food offerings has become in recent years in Kuala Lumpur. Nowadays we get so many choices from all parts of the world mainly due to the influx of tourists and migrant workers. If you're adventurous like I am, you'll have a whale of a time sampling different tastes on home ground without boarding a plane. 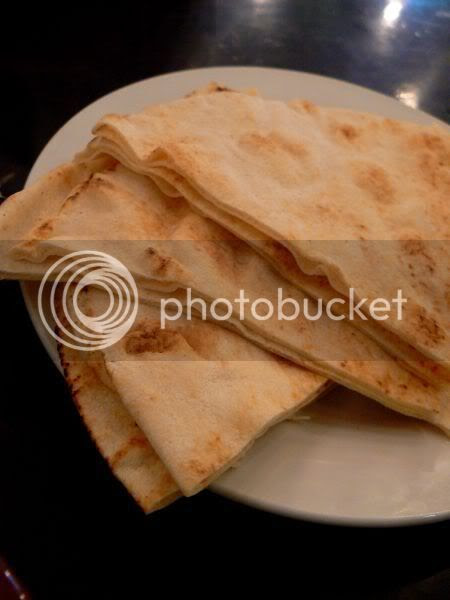 Pitta Bread (Served with Hummus)
Once when I ventured to the dark roads of Jalan Damai for a slice of Japanese heaven in Hajime, I was greeted by a row of brightly lit bungalows packed with Middle Eastern tourists. Vowing to return to further investigate this, we had an opportunity one Saturday night. Initially I was slightly apprehensive as there were no noisy crowds like the other time. Since all of them looked and sounded the same with the essential pre-fix "Al" name, we had a tough time choosing which one to try. Since hunger prevailed, we settled for a simple place which seemed to have more customers than the others. 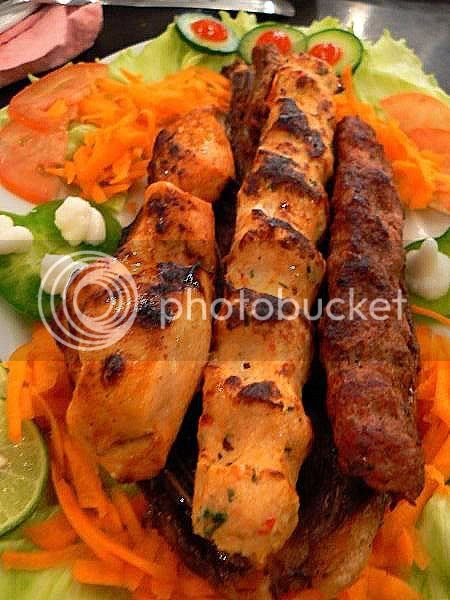 Mixed Grill (RM20++)
We actually wanted to try our all time favourite Middle Eastern dish - Mendy Lamb which we had eaten at Al-Diafah before. However, they had run out hence we were recommended their Lamb Kebsa. Food was quick to arrive while we sipped on our refreshing drinks. I loved their cooling Mint Tea especially since the place was not air-conditioned. For entertainment, we had a big projector screen playing an Arabic comedy. Even without subtitles, it was funny with an Adam Sandler lookalike. Lamb Kebsa came with a generous pile of rice, a sauce which kinda resembled tomato soup except it had potatoes inside it and a green chili pickle. Although the lamb was tender, it looked a bit daunting with a thick layer of fat. That was easily remedied as I removed that piece of fat from the meat which was tender. Eaten by itself the lamb was quite tasteless but it tasted really good with the sauce and the pickle. 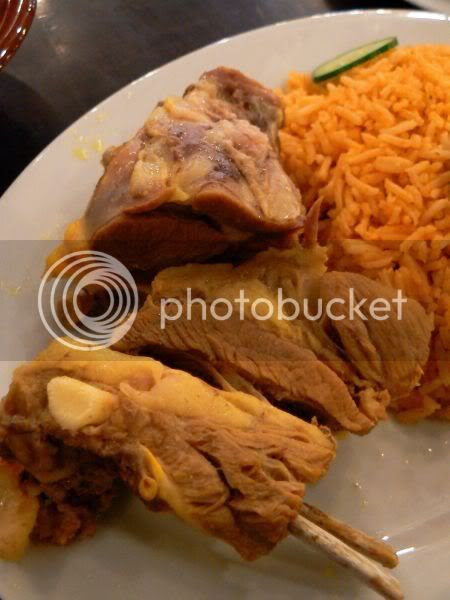 Lamb Kebsa (RM13++)
We had also ordered an appetizer - the Hummus which is made from chickpeas and a mixed grill. The mixed grill consisted of kebabs made from chunks of chicken meat, minced meat and a thin lamb shoulder chop. Everything tasted great especially the lamb chop which was crispy yet tender. Combined with the Hummus and the pita bread, it made a really substantial meal. 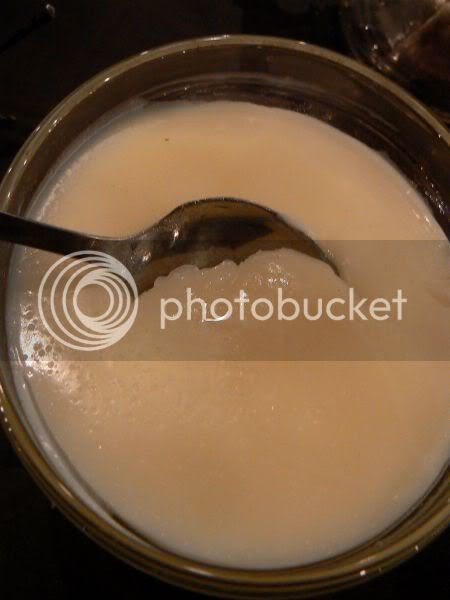 Desserts were complimentary to all tables and they served a popular Middle Eastern favourite - Mehallabyah which is essentially a milk pudding flavoured with rose water. Very nice and refreshing.
Prices are extremely reasonable here especially with the large portions served here. Although ambience is quite lacking since it's al-fresco dining, we liked the food served here and wouldn't mind returning again. I like to label it as a Middle Eastern mamak stall since it's open air like a Mamak and has relatively cheaper prices compared to a restaurant.
Al-Amir Restaurant
No. 56, Jalan Damai
Kuala Lumpur
Tel No: 03 - 2141 8340
(Halal. Behind Jalan Ampang. From Jalan Tun Razak, take a left turn after Vista Damai condominiums. Drive straight and take another left turn, go straight down. You will pass by Rahsia. Go further up where there are a cluster of brightly lit restaurants. This place is near Basil Leaf Restaurant. Open from noon to midnight.)
*Disclaimer: The opinions expressed here is entirely based on my personal tastebuds and may vary for others. The reviewer also declares that she has not received any monetary or non-monetary compensation from the restaurant for writing this review.
Tagged with: Middle Eastern Food + Lamb Kebsa + Kebab
Posted by boo_licious at 12:00 AM

I'm still quite ignorant about mid eastern fare. Good to know there's a relatively cheaper place to try out.

Never had mid eastern food before. Those pita sure looks alot like out capati. ;)

Not sure why but I find lebanese food rahter blend and not much fo a taste. But I like humus, goes very with white wine. You can see most of this food in UK such as kebabs. You also able to buy most of this food at supermarket such as Tesco and Mark & Spence.

i love a good pita bread.

Looks like u had a good adventure! ;p Thanks for going and sharing! I always associate Lebanese food with lots of chickpeas and kebabs for some reason.. hehee

that is great, the mixed grill picture talks. I can understand why you did not like the kebsa, not every one like it any way. I regard KL as the food capital of the world, and from my experience middle eastern fod in Kl is as good and even superior to the middle east. I can not wait for more bloging on middle eastern food, as matter of fact in my next visit to KL I promised my self to try al nafourah at the meridian.
great report, keep it going

hmmm wondering if da food here better than al-marjan @ klcc? waiting for ramadan month for their its buffet! :D

I was at a Lebanese restaurant @ Jalan Imbi ( opposite of Restoran Oversea) once. Their food is so, so for my taste, but according to our Iranian friend, that place is supposedly better than Tarbush (main rd of Bkt Bintang) which according to her, had become too Comercialized..

You should have checked out Al-Rasha (Rawsha? if I remember what it was called). Its to the right of the Japanese restaurant if you come from the French embassy.

The lamb with rice dish (can't remember what its called, but it starts with 'r')there is fantastic. Tender lamb, fragrant rice, etc.

Been there several times, but always forgot to take pics and never got round to blog about it. Seeing your post reminded me about it ;)

ohh.. middle eastern food.. maybe becos i work KL-Dubai often.. Middle eatern food is many on my fav list.
nevertheless.. love ur blog.. U make me miss malaysian food so MUCH! :)

cat cat - slight difference as our chapati is not as thin but it does have the slight floury top like a chapati.

big boys oven - yeah, M&S has great selections of food like this. Kebabs are so popular they have marinades specially for this at the stall.

daphne - yeah it is a lot of chickpeas and kebabs but they also have other items.

c'est la vie - I've been meaning to also check out Al Nafourah as I heard good things from Splashie Boy when he dined there for lunch. Since most of the food is cooked by Middle Eastern people, this is pretty genuine.

meiyen - Al-Marjan's food is presented better. By the way, that buffet they have is also available all year round. No need to wait for Ramadan.

Bernsy - yeah, Tarbush is commercialised and pricey. I ate at the Starhill one and thought it was ok.

lingzie - yes, definitely wallet friendly here. There are so many here that u can have fun exploring.

elb - I passed by Al Rawsha and it was packed like sardines. Will give it a try one day but I quite like this simple place which was so much quieter.

ninien - once in a while must try something besides Msian food as I like to try new things.

boo_licious said...
This comment has been removed by the author.
1:24 AM

Well i haven't try this restaurant yet but i did tried Tarbush.. It was delicious.