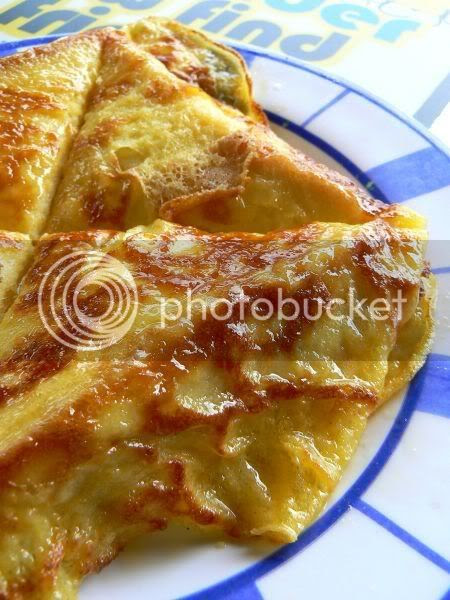 When it comes to new things to try, always expect me to be the first in the line. After reading Gluttons on a Diet where they were extolling the virtues of this amazing Roti Bakar Telur Cheese, I knew this was a MUST HAVE for my breakfast. 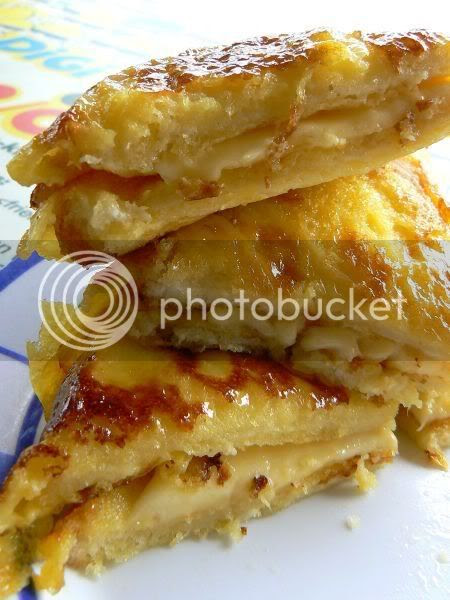 When I ordered this at Spicy Kitchen, I was a bit hesistant since there was no signboards saying this particular dish existed. However when I told the man doing the roti canai at the stove I wanted the Roti Bakar, he straight away knew what I was talking about indicating it must be super popular here.
It looked so beautiful when it arrived with a fried eggy topping. Essentially a French Toast, it consisted of white bread sandwiched with cheese and then fried with egg. What makes this unique was the taste - a combination of sweet and salty. The egg part was sweet like a French Toast but the cheese portion was salty. The combination of the two flavours worked so well together as it wasn't too cloying while the salty part was just nice with the thick layer of cheese. It's not cheap though as one portion costs RM4 but the cheese part is definitely thicker than those thin Cheddar pieces you find in the sliced cheese packets. 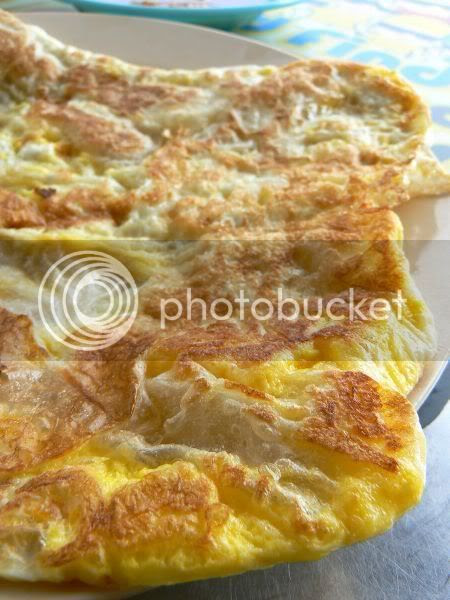 Splashie Boy went for the conventional Roti Telur (RM1.50) which looked good too. He said it tasted nice even though I didn't get a chance to eat it.
Breakfast here tends to be quite quiet compared to their night time business which always see them packed. The Roti Bakar Telur Cheese is available at all hours so it's not necessary a breakfast item. Aside from this place in Desa Sri Hartamas, they also have one in Bandar Menjalara.
Restoran Spicy Kitchen
No. 24, Jalan 24/70A
Desa Sri Hartamas
Kuala Lumpur
(Halal. Open 24 hours. At the same row as Backofen and Guardian Pharmacy.)
*Disclaimer: The opinions expressed here is entirely based on my personal tastebuds and may vary for others. The reviewer also declares that she has not received any monetary or non-monetary compensation from the restaurant for writing this review.

OMG, the roti bakar looks so delicious! Another "must" visit place.
Anyway for breakfast, why not head down to Mid Valley? There is a new shop called "Toastbox" which serve kopitiam style food. It actually started at Singapore's Food Republic. Their quality can be compared to the Yakun Singapore (which you reviewed from your last SG trip). boo_licious, you should give it a try! :)

Ahhh, another favourite breakfast of mine - Roti Telur. I like to add some bawang to it. YUM!

mikelee - I read abt it from Tankiasu's blog (Toastbox) but yet to try as I have not visited Mid Valley for a long time. That butter mountain pix he had up in his blog was scary though.

cat cat - this one was eggy and crispy based on the looks. I didn't get a chance to eat it as he finished it all!

another roti place ? and i have yet to try out the roti at Raju...:p

ling239 - this one slightly different as it's the french toast which is very yummy. Give it a try one day.

Ya..its one of their signature. For those of you who stay after the Kepong LDP tol, you can visit their original stall at Bandar Menjalara. Also, their roti kaya is damn good....you can ask them to make roti kaya + pisang...tell them u want it to be "garing"....whoooo hooo!!!

Don't go there if you are on a diet! The ayam masala is not bad too!!!!

looks good, Boo! I like the fact that it's open 24 hours. Maybe we can go there after a night of partying some day? :-D Soon? :-D

I've just tried the roti bakar telur cheese this morning, it's really tasty! I'm so full! it's very filling with the cheese and egg...

the roti bakar telur cheese..OMG! looks amazing and am sure tasted fantastic too!

Wow wow wow!!!! Just the way i like it. I used to make this at home but I add the cheese into the egg instead of sandwich it between the bread. Must go try out this place soon. Even the roti telur looks good.

thanks knizam for the tip! Always a fan of Nasi Briyani.

mh - aiks! Now I feel like eating that roti kaya with pisang.Thxs for the info as that will be very handy.

LL - ah, yes definitely a good way to end some partying. Shld have recommended this to you last Sat?

infant - ah, I'm glad u liked it. I was blown away by the sweet and salty combo of tastes. Yum!

precious pea - near yr place so you can go try it soon.

boo,
I never had The Roti Bakar Telur Cheese before, but they way you described it was enough for me to go out and get some bread later today. You got great shots too. Thank you for sharing with us.

anasalwa - hope u can recreate it but I must admire how they paired the sweet and salty flavours so well.

whoa!!!, you had a passion in blogging, thumbs up for your work of love.. Hehe very inspiring ideas,


anyway I'm william
mind if I put a link back to you?