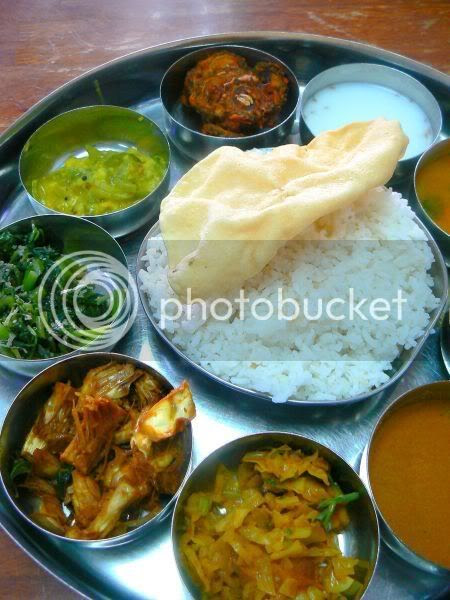 Usually whenever you mention vegetarian food, people will say "no way as I love my meat too much". I used to be one of those "anti-vegetarians" but ever since I took the plunge to try the food, I have been pleasantly surprised with the selections and most importantly, it tastes good. 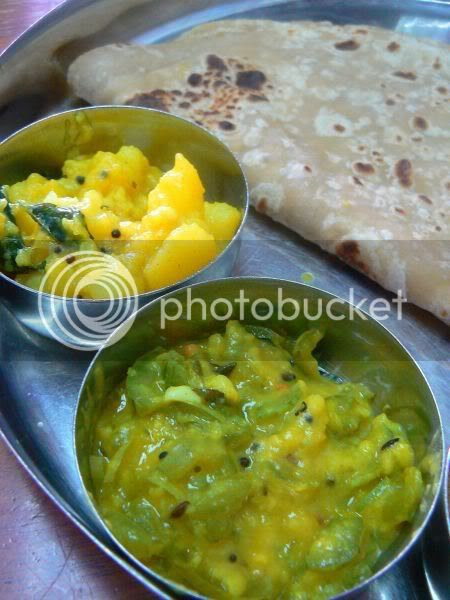 This particular place practises Hare Krishna principles - no garlic or onions to flavour their food but by some miracle, the food tastes great. We have eaten here twice - once for lunch and another time for dinner. For lunch, they have their sets. There's the Nava Thali Set with rice and nine small metal bowls with curries, yoghurt and pickles for a complete meal. The vegetables change on a daily basis for variety. Also available during lunch time is their Chapati set served with potato and bittergourd curries. 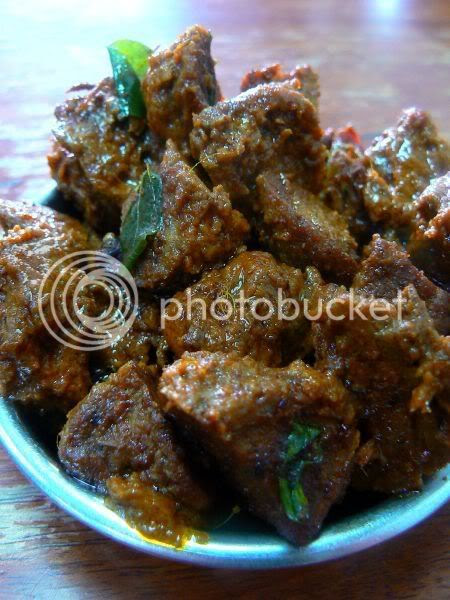 The Mutton Varuval came highly recommended by a friend who had dined here earlier. It's really good stuff with all the spices flavouring the vegetarian mock meat. 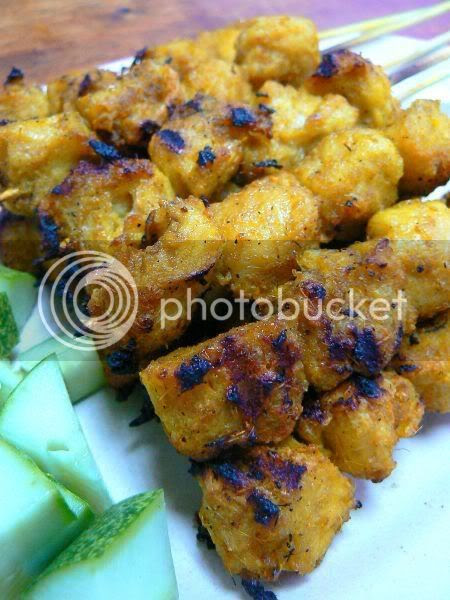 One of their specialties is their vegetarian satay which is only available in the evenings. They have been even featured on the local food show, Ho Chak for this. Even though it's made from gluten, the chunks reminds one of tender chicken satay. It's well marinated with spices and grilled with a slight smoky taste. 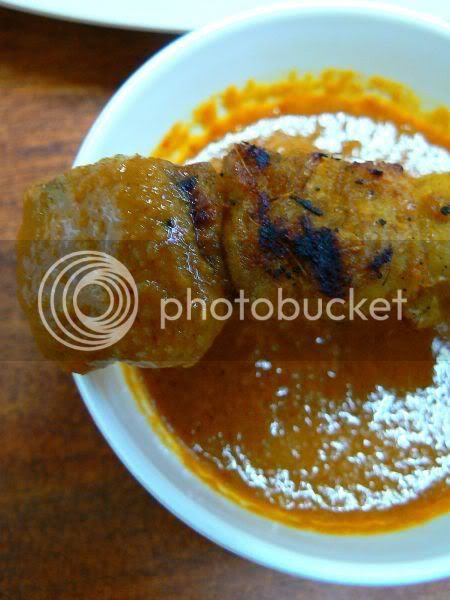 They serve the satay with an unusual peanut sauce that is not too thick but flavoured with curry powder. I kinda didn't like the sauce as I always like my satay sauce to be full of peanuts. However the satay was tasty just on it's own which I really enjoyed. 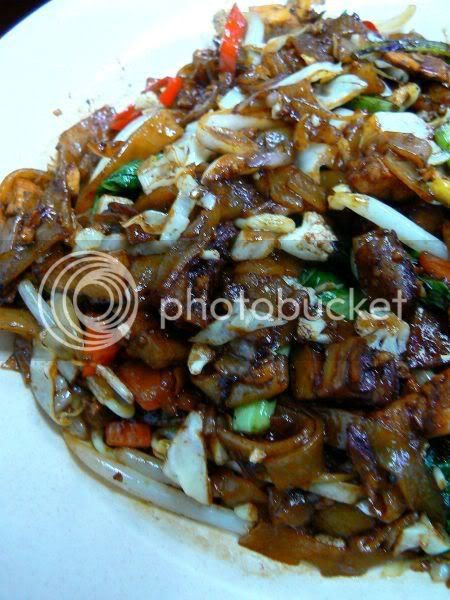 I tried their char kuey teow in the hope it would taste like the one I had at Blue Boy's. Unfortunately it was slightly oily and they had cut the strands of rice noodles which I hate. It had wok hei but somehow it didn't feel like char kuey teow with all those sinful items like cockles and deep fried pork lard cubes. 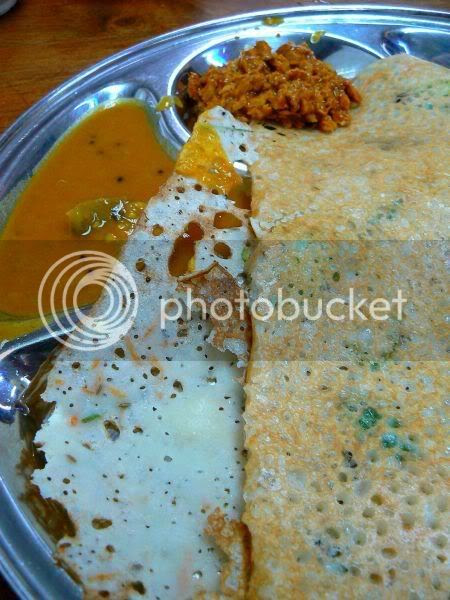 Splashie Boy had a Rava Thosai with Kheema which tasted not too bad but slightly chewy. This place also serves vegetarian cakes (saw a few cupcakes) and yong tau foo which is popular among it's customers. 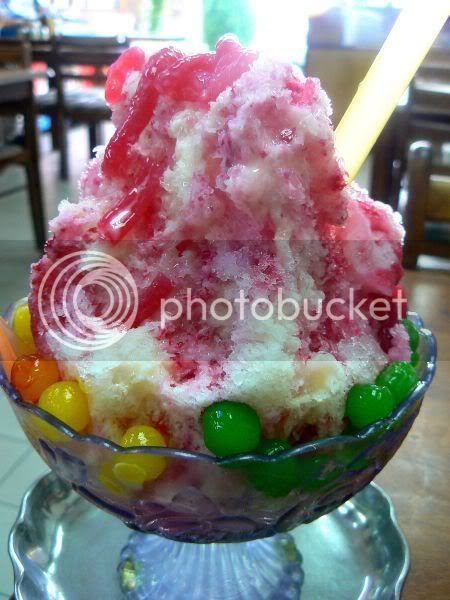 To cool off during lunchtime, we shared the sweet and icy cold Ais Kacang which was filled with a kaleidoscope of colours - yellow, green, red and pink.

Tel No: 03 - 2274 1959
(Halal. Open from 7am till late every night.)
*Disclaimer: The opinions expressed here is entirely based on my personal tastebuds and may vary for others. The reviewer also declares that she has not received any monetary or non-monetary compensation from the restaurant for writing this review.
Tagged with: Malaysian Food + Indian Vegetarian + Satay
Other reviews:
Posted by boo_licious at 12:30 AM

I love indian vegetarian food. I don't care much for the mock meats though.

Your pics are GORGEOUS, Boo! You've certainly outdone yourself. :-)

The vegetarian satay look like the real stuff. Love all vegetarian food, cos I won't have to worry about chunky meat or fish! Hee hee...

I agree with wmw that the satay looks like real chicken meat. Wow, I would give anything for that ice-kachang.

Oooohh..i watched that Ho Chak episode on the satay. Wow...now that you confirmed that it's good stuff, will go try it soon.

hmmm mock meat..satay..ckt..definitely not a place to redeem all those sins of eating meat..but those lovely small dishes just looks wonderful!..

alamak ...looks so much better than the real meat!!

Always wanted to try the vegetarian satay, as my mum is a vegetarian (twice a month), ever since I saw them on someone's blog.

there's a lot of indian vegetarian mamak's along that same road rite? everything time i pass by that road... I always see so many people eating along the road.. even in the wee hours in the morning!

looked just like the real thing. hopefully can try soon. thanks for the lead!

ooo yummyy. now i have to get some indian food fix.

hv never sample any indian "vegetarian-meat" tho. chinese, many time, but not indian....must try. do they hv this flour flavor which occurs in less establish vegetarian shops? lol.

lemongrass - ah, it's also fast becoming a fav of mine vs the Chinese ones.

wmw - ah, good pt abt the fish and meat part. Do try this, I love their satay.

cat cat - it looks and even tastes like chicken so that is definitely good but it's nice and tender.

precious pea - I caught that episode so I tracked this place down to try it. Very good stuff.

joe - the thali is good. I like the home cooked feel to the vegetable dishes.

tankiasu - ta pau for yr mum? But I think it has to be eaten hot or else not so nice so you may have to bring her here.

teckiee - there's loads around the brickfields area. I saw another one which I want to try one day.

babe - ah, this will be good for you when you go vegetarian.

rokh - hiya, long time no see you around. Yes, do get yr Indian fix. I always think it's weekend food as I love sitting around eating this leisurely.

ktx - I don't find it that taste visible here, probably because lots of spices have been used to mask it.

really have to praise u lar.. nice pics! Ur pictures tell me all u've got to say! even looking at them makes me drool so earnestly! *claps claps* cheers to indian food.. have not try vegetarian satay....

christine - ah, sometimes it's to do with lighting. My camera is awful in low light conditions though.

the satay is interesting..in fact it look like the real stuff

kampungboycitygal - yeah, if no one said vegetarian, you will think it's chicken satay.

talk about up close and personal...

I've been planning to go.. anyone keen to join??

wowww the food looks so reall and great! im hungry already! anw, just hoping that you will visit and link our vegetarian restaurant website too!

Indian food, often mistaken as oily, loaded with extra ton of spices but it is very brim picture. It is just not so. Indian food proudly has splendid ways of cooking the food without troubling with the nutrient value. Now taste vegetarian food in Orlando, Please visit : www.tablabar.com