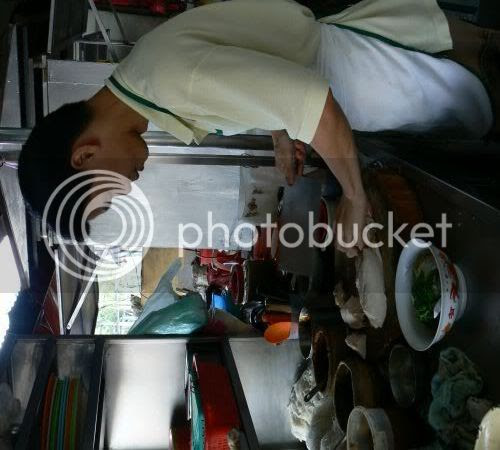 Last week, I finally managed to make a trip this place after reading about it from the two blogs who had earlier featured this stall. It took me a while as I got distracted with the wholesale clothes shops just off Jalan San Peng and for some funny reason, I thought the prawn mee place was there. Once I got back to Jalan San Peng, it was pretty easy to spot the place which faces the road and is next to an Indian temple called Kuil Devi. 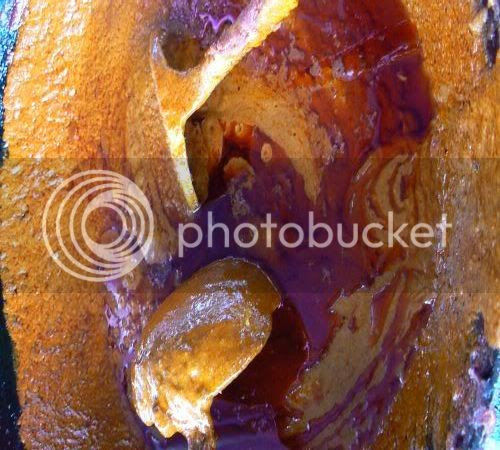 When I first got there, I was surprised to see them cooking a big wok filled to the brim with chilli sauce. Subsequently I got talking to the proprietors of the stall namely Mr. Tan and his mother who explained to me what it was for. In fact, I managed to have a long chat with Mr. Tan as he must have been the first internet savvy hawker I have met. Usually when I ask five million questions, they'll always shoot me the question back: "are you from the press? and I'll say no, this is for own personal use and my website." Imagine my surprise when this time, I was asked for the link to this site. 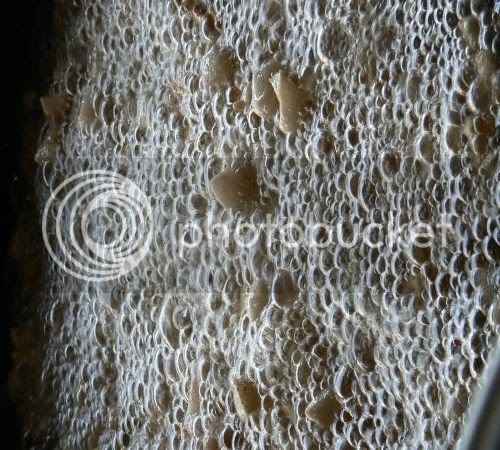 Mr. Tan's family has been running this prawn mee stall for 36 years and thia version of prawn mee was concocted by his father. 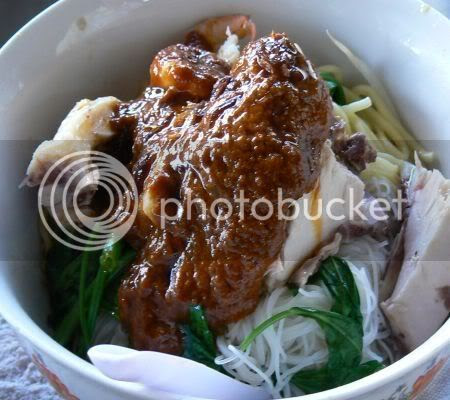 Totally unlike the other places, they put the chilli sauce and broth seperately for each bowl allowing you to control the heat you can take. If you want it with more kick, help yourself to more chilli sauce from the table which is made on a daily basis. According to Mrs. Tan, they make two to three big woks of the sauce every day. 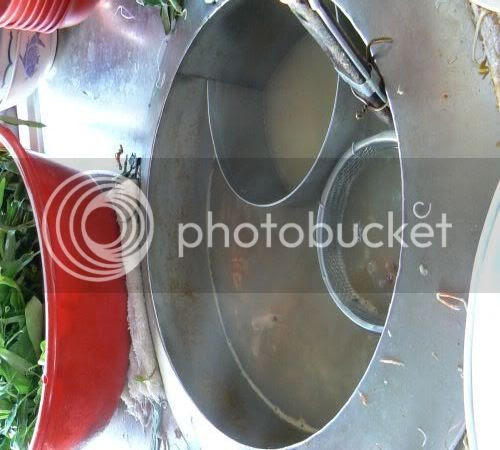 Everything is freshly made right down to the fried lard pieces which adds the sinful topping to the noodles. Prawn heads are used to boil the broth that is constantly kept boiling. It also acts as the boiling water for them to cook the noodles. 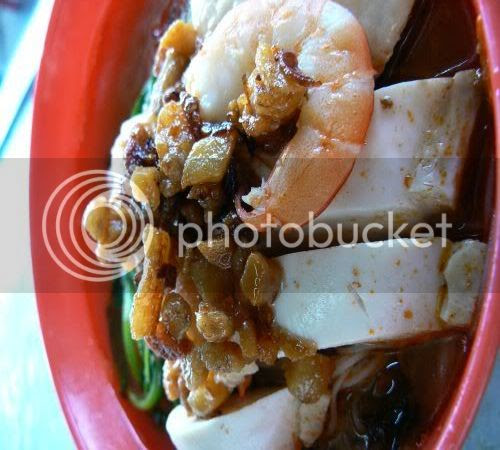 Unlike other places, they serve their prawn mee (RM3.80 for small, RM4.50 for large) with poached chicken slices, medium size prawns and kangkung (water spinach). The soup is delicious and makes a pretty substantial meal with the chicken. You can also opt to add more ingredients (Kah liu in Chinese) whether it's small prawns (RM9) or large prawns (RM10). 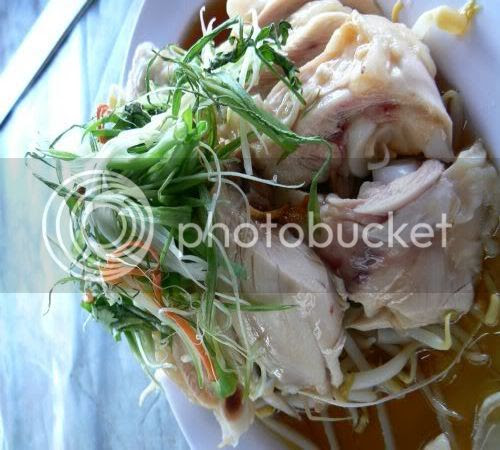 If you're sharing with a few people, order their poached chicken (RM4.50). Laid on a bed of crunchy bean sprouts, it's drizzled with sauce made from sesame oil. The texture is not as smooth as the Ipoh Kuey Teow places but it's definitely value for money as their portions are pretty substantial.

Besides their signature prawn mee and poached chicken, they also serve lam meen with the thick yellow noodles.

(Non halal. Note the stall is also called San Peng hence you can't miss it with it's yellow and red signage. The stall closes every Tuesday and is open from 7.30 am to 3.30 pm. To get here from Jalan Loke Yew, turn left after the chinese school and when you see a Shell petrol station. Go straight, you will pass a traffic light. Continue going straight and you will see a TM Berhad orange and white building on your left hand side. Make a U turn on the right hand side of the road and the stalls will be on your left hand side as they're in front of a row of shophouses and next to the road. The GPS coordinates are N 03 08.024', E 101 42.700')

wmw said...
This comment has been removed by the author.
1:28 AM

Funny how I never get to try this stall even though I stayed in that vicinity for more than 20 years. :-P

The prawn noodles here is extremely addictive. Looking at your picture, my glutton friends would probably tell you that there isn't enough lard! *wink*

this is the bestest prawn noodles IMHO in KL!!! btw next round, you try the fried noodles in front of the kuil. their sang har meen not bad and cheap too but of course the prawns are much smaller.

further up is my fave chapati place... look for painted wordings - "tiger jit chapati". ask them for freshly made chapatis otherwise they'll give you those they kept in the warmer. their dhall is of those thick type with lots of vege like cauliflower, long beans etc etc

wmw - it's pretty easy to get here. just use the Dewan Bahasa and Pustaka way from the palace and at the traffic lights, turn right towards Jalan Loke Yew. After that, follow my instructions.

tankiasu - time to try? don't worry, it happens to me sometimes too as I have yet to try quite a few famous places near my own hse.

lyrical lemongrass - LOL! Can't put too much or else no one can see the prawns, chicken, noodles,kangkung and the soup.

babe - yeah, the food around there looked interesting esp the tiger jit chapati place. Will go try them out since I now know my way around this place. Thxs for the tips.

the portion of a small serving of prawn mee looks generous.And the poached chicken is only priced @ RM4.50???Wat a deal!

xiu long bao - to put things in perspective for you. That bowl was the small portion and the poached chicken was for chicken leg so it's pretty generous portions since the small prawn noodles came with 3 pcs of chicken.

And this was way before I spoke to him so they served it to me without knowing I was going to snap pixs of it or feature them.

Steamed chicken in prawn mee? Very interesting!! wmw, when you going? Can pick me up also?

precious pea - hope you both like it and if you see lyrical lemongrass' site, they loaded up on all those sinful things to make it a yummier bowl.

ohgoodness, i just short circuited my keyboard with all the saliva drooling....ARGH, tomorrow's tuesday, and its CLOSED on tuesdays? smack forehead!!!

fbb - never mind you can go on Wednesday and said I sent you. Am sure Mr. Tan will be thrilled to see so many people excited abt his noodles.

swee - poor girl. Never mind you have lots of sweets to eat to console yrself.

Oh.. that look really nice, but the location is not convenient to me :(

Tried the noodles today, all the way from Puchong just to try. These are my comments
1) The broth is a bit too salty for my taste.
2) Not enough prawn taste in the soup.
Overall I would say 6.5/10. Maybe I am too used to Penang Har Mee.