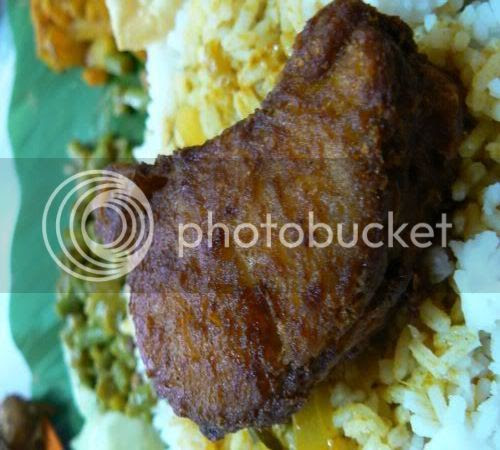 I took a little break from posting yesterday as we celebrated Federal Territory Day. I guess Blogger knew I was feeling lazy as it refused to work the night before and early yesterday.

Today, I thought I'll blog on one of favourite weekend foods aka the banana leaf rice. I was first introduced to this small stall in Brickfields long ago by an Indian friend, Mohan. Little did I know it was famous until I stumbled on many references below in other people's blogs. Unlike other places which open their own shop, this Indian stall shares the space in this crowded coffeeshop with other stalls. Among these stalls, the pork noodles is also pretty famous and has it's own faithful following as seen by the New Straits Times referencing them as the best place in Kuala Lumpur for this type of noodles.

From what I gather, Mathai's originally started out in the 1960s and the current proprietor is R. Moorthy after the original owner, Mathai retired. Sometimes, it's referred to either Moorthy's or Mathai's depending on how long you have been eating at this place. The must-have when you dine here is their fried tenggiri which I have featured above. Spiced just right and juicy to the bone, it's my favourite. Most places always slice their tenggiri fish too thin hence when it's fried, it shrivels up and is dry on the inside. Here, the fish is sliced thickly to avoid it from drying out before the outside crisps to the beautiful golden brown you see above.

The curries here are pretty good too and we usually order their chicken curry varuval. They also serve fish head curry if you like. Prices here are also extremely reasonable compared to those cut throat Indian restaurants so expect to spend about RM6 to RM10 per person depending on what you order. Incidentally if you can't take spicy food, try the cucumbers they serve as vegetables to cool down your tongue.

(Halal. Opened from 10 am to 3 pm and is closed on alternate Mondays.)

Updated on 16 May, 2008 - The stalls at New Lay Sin including Mathai's has moved down to Mayflower Seafood Restaurant, 144A, Jalan Vivekananda, KL.Tel: 03-22603698/6698. Operating hours are from 10.30am-2.30pm (lunch) and 5.00pm-10.30pm (dinner)
*Disclaimer: The opinions expressed here is entirely based on my personal tastebuds and may vary for others. The reviewer also declares that she has not received any monetary or non-monetary compensation from the restaurant for writing this review.

hmmm... the smell of fresh fried tenggiri.... now i wanna go get some banana leave rice.

tummythoz - very observant of you as I wasn't planning to announce that as I'm still getting the hang of the GPS unit.

fulltime mom - go and makan some. Am sure there's lots in Subang Jaya. If not, weekend tmrw so can get yr hubby to drive you down for this.

Hey Boo - Please be on the lookout for an Evite from either Audrey or I in the next few days. Hopefully we can all meet up. ;)

thxs for the warning bee yinn. Will look out for it as I notice some of yr emails are going into my spam folder.

I think many people might have overlooked this place because they thought it is another small stall !

like us, we r not used to be served by indons in indian shops ! hahaha

i must have been really lucky to have tasted the ori owner's fried tenggiri more than 10 years ago :p i still remember it was so delish and its hard to find something similar like it today

new to this space. i have to say, it's definately my kind of thing, this. thank you for sharing.

and yes, the fish there is class. excellent stuff.