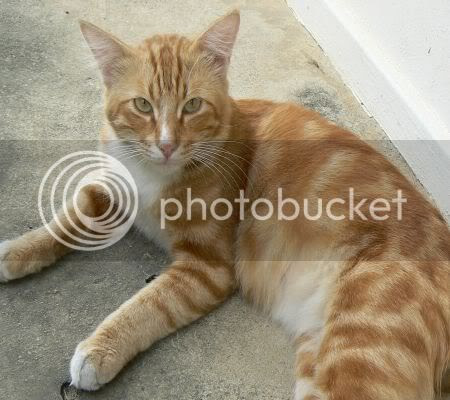 This weekend, I thought I'll snap pictures of the ginger cat who comes over to the house for food. When it comes to food, kitties have a way of sniffing things out hence this fella turned up at our doorstep. Initially it was all for Fluff Puff but now he's found better things at the house aka free food. We actually haven't seen him for quite some time as he got chased away by another stray who was pretty aggresive hence I'm surprised he is back. However, occasionally like last night there will be tiffs between the two of them that involves a lot of screaming and running. 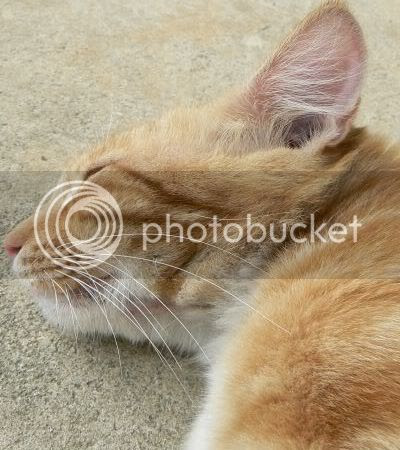 He loves to chill out at the garden while the other cats ignore him. As usual, he wasn't too amused when I wanted to snap pictures of him hence he totally ignored me. I love his fluffy coat and slightly marbled markings. We've even submitted pictures of him to a talent agency as they're looking for ginger kitties so who knows, he may be the next kitty star of Malaysia.
Rosa's Yummy Yums is hosting this weekend so do check out her adorable kitties, Maruschka and Fridolin plus all those worldwide kitties at her blog.
Posted by boo_licious at 5:48 AM

This stray cat is very beautiful!

Here, we also feed some kitties which are not very well taken care of...

Teh Tarik or St Emilion? said...

I'd love to adopt that cat if it weren't "yours"! I'm more of a dog person that my bf and he adores cats 'specially tabby ginger cats like this fluffy one!

Hey, the ginger cat is too sweet!! loved the pics. And do have a look at this too
pet ecards

Wow what a beautiful cat! He looks so healthy for a stray I am glad to see. And posing for photos - he's a real stunner! :)

Oh, I love ginger kitties, as I am one myself. This one is so cute. Is he the same cute kitty that was looking through the gate in a previous WCB? What cute photos you have here!

Ginger Kitty is beautiful!! His markings are very nice. I hope he does become a big star. You can be his agent! :):)

waht an adorable kittie he ist. i love those ginger kitties (but to be honest I love all cats ...)

You got wonderful photos of this cutie!

have a nice weekend and
hugs'n'kisses
Kashim & Othello

rosa - thxs for hosting and maruschka is so sweet to know where's her spot on the bed.

toujours moi - we're not too sure if he is a stray but he hangs out at the house 24 hrs. Bit of a noisy creature though as he's got a fine opinion of himself.

Thanks carol for the link!

kate - we seem to get stunners for strays around the neighbourhood, the other one is pretty handsome too with a lovely marbled coat.

kitikata san - I love gingers too since I have my Ms. G. this one is not the gate one but the one who wanted to chase my Fluffy hence we had to snip her since we can't handle any more kittens.

sher - It'll be nice to make him a star but I guess not since we haven't heard from those people for some time.

astrid - thxs so much kassim and othello. I always have trouble leaving comments as I don't know where it is.

uhm, having trouble to find where to comment? did i get that right?

well, just belo the title there is a comments link just klick and it will lead you to the comment form (maybe you'll have to scroll down a little if there are already comments...

hope this could be of any help :)