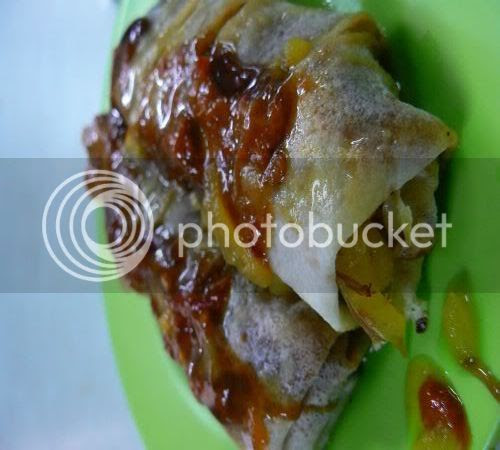 Somedays when my mood strikes, I will delve into places which are not my usual haunts to search for food. One such visit to this tucked away food court led to the discovery of this yummy popiah basah(RM0.70 per piece). Although I have seen this fella making his popiah last year in the Section 14 Ramadan Bazaar, it was my first time visiting him at his stall at the Medan Selera. It was definitely easier to get a taste of his popiah versus waiting in the long queue at the Ramadan Bazaar.

If you want to take a tea break, drop by his stall as his popiah basah is excellent. Turmeric hue yam shreds dotted with tiny prawns, bean sprouts, deep fried shallots and egg are encased in a thin flour skin smeared with the signature chilli and sweet sauce. He dots more of the sauce on top of the popiah which should be eaten straight away to savour all the flavours. Actually writing about this now, makes me hanker for another taste for his popiah basah. I guess you know where I will be for today's teatime break! By the way, this particular Medan Selera has excellent lontong too which is available in the mornings.

(This is on the second floor, just go up the main staircase, take a left turn and you will see the Medan Selera. The popiah stall is tucked in a corner. Available from 3.00 pm to 6.00 pm)

Other reviews:
Posted by boo_licious at 9:00 AM

is this the one being sold by an indian man? been eating their popiah since 1993 actually. it's good stuff... the crispy thin goreng pisang nearby is also superb

lanatir - yeah, an Indian Muslim guy sells it. Very nice stuff. Thxs for the tip on the goreng pisang.

so cheap! there's one selling at RM1.50 but then quite nice lah

babe - wow, double the price. Where is this popiah basah?

Hey boo! managed to get the info u wanted to upgrade your blog? Ask him how to get some "dollars" from it too.

Found your blog through my stats. There goes my diet!

hmm, popiah basah? something new to me.

popiah is pretty famous here in sgp, ppl willing to queue for a good one, haaa...

audrey - been busy, yet to email that fella. Got to do it soon as I love yr layout.

have you tried the lontong at the Medan Selera? It is very famous and has been there since I was small.Its on the second floor on the left wing. Walk towards the end. There are 2 stalls there. The famous one is the last one at the end. Best! U must go early in the morning though.. before 8.30am. It will be all gone after that.

lin - thxs for the tip. I've eaten and blogged abt it. Very nice stuff especially the coconut topping.

there's one stall inside sunway pyramid also selling popia basah bt it's a bit different then d one we usually eat, crispy n juicy.. bt it's absolutely delicious!! they sell it for RM3 for jx one roll n RM5.5 for 2 rolls.. damn expensive bt it's worth it if u r a popia lover.. :)

I've been having this popiah basah since I wad in kindergarten in the late 70's when his late uncle started the business in a small wooden pushcart stall at the far end of the medan selera where the digital mall is now .... he took over after his uncle passed on .... the taste and quality has never changed since. Sadly, none of the next generation in his family is interested in taking over the business so while he's still around I'll be sure to continue enjoying it as much as possible ....