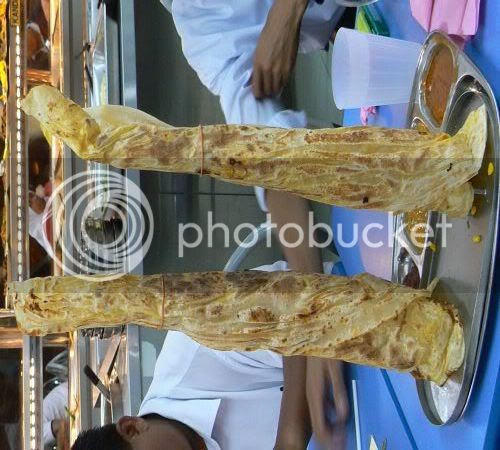 One night, we both decided to grab a very late dinner at this restaurant. I've heard about their famous Roti KLCC hence I was really lucky to be around when a large group of people ordered it and I got to snap a picture of it.

It's basically Roti Tisu (Tissue Bread in English) - roti canai which is pulled until it's super thin and cooked on a hot plate with lots of margarine until it's really crispy. Usually sugar is sprinkled on top to make it crispier and add a bit of flavour to it. Some restaurants drizzle condensed milk instead of sugar. This restaurant came up with an innovative way to serve their Roti Tisu based on the Malaysia's most noticeable landmark, the 88 storey Petronas Twin Towers which we usually refer to as Kuala Lumpur City Centre (KLCC). Sadly there's no skybridge linking these two towers just like the real one but I think this is a great version. The towers are made by attaching the long and crispy tissue bread over two metal poles hence they can stand tall and proud.

Next time, drop by this place and order it as it's RM5 for this amazing wonder of Roti Tisu. It's great with sweet teh tarik and shared among lots of friends. Kayu Nasi Kandar also does a similar Roti Tisu version except that theirs is taller and served like a tower (maybe they can rename it KL Tower?). See the following links for pictures of Kayu Nasi Kandar's ginormous Roti Tisu.

(The restaurant is at the cluster of shophouses just after Shah Alam Giant.)

O_o O_o whoaaaaaaaaaaaaaa so so so so talllllllllll... where's this place? i am not so familiar with shah alam area :( i wanna go try....

Jackson: I believe slow and steady is the key; and of course some help would certainly be useful.

If anyone is in the TTDI area and feeling really famished when it's late at night, try the roti mosaic at Mohsin's in TTDI. It's essentially a naan with everything on it, including cheese.

these guys forgot the gushing & shooting fountains of ice kosongs at de base LOL !

tigerjoe, then i guess i hv to stand up and start steadily from the top. LOL

What are those round band thingy at the top of the roti? Rubber bands?!

Mei Yen - hard to describe to u as it's near Giant Shah Alam and the football stadium.

Jackson - slowly by yrself or with lots of friends.

wmw - LOL on the toothpick bridge, then they also must have Catherine Zeta Jones swinging around so it looks like Entrapment.

tonixe - there's also the missing foreign workers which love to hang out there every wkend.

whistler - The things they do to sell roti.

rasa msia - yeah, I think they use rubberbands to tie the roti to the metal poles so it will not drop.

Boo - wow, I guess one has to be very careful or they will eat the KLCC with rubber bands. LOL!

rasa msia - yeah, I guess that's the foundation for the skybridge!

it's great effort but i don't think i'll put it into my mouth :P