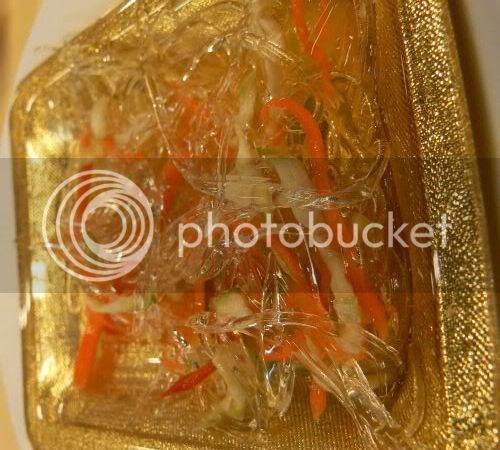 Recently I reckon, I have been eating so much crab that I have become an expert in determining which kind they are. Last weekend, we had a farewell dinner for a friend of mine who's emigrating to Australia which everyone seems to be doing nowadays. Hence we decided to try out this new place near my friend's house based on her colleague's recommendation.

First off, dinner didn't start off as planned since we got hit by a massive rain storm. Since my friend and I had already gone there as per the scheduled time, both of us sat around catching up on what's new. He was hungry hence he ordered a few dishes as appetizers while waiting for the rain to subside. From what I read in the menu, this restaurant is a branch of Seafood Station which is located in Singapore. This is their second Malaysian outlet with the first one in Jalan Ipoh. 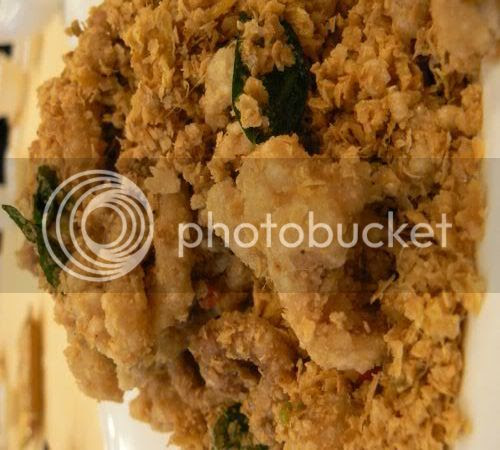 We started off with their appetizers which was fake shark fins (made from gelatine) mixed with shredded vegetables lightly tossed in a vinegar dressing (RM3++). Not that great but kinda interesting. Next was their Oat Sotong(RM20++), which came with lots of crispy oats tossed in the sotong coated in a crispy batter. I liked their sotong which was nice and crispy and the strips of lemon rind they added to the dish. However, they added too much sugar to the whole dish that it was too sweet. 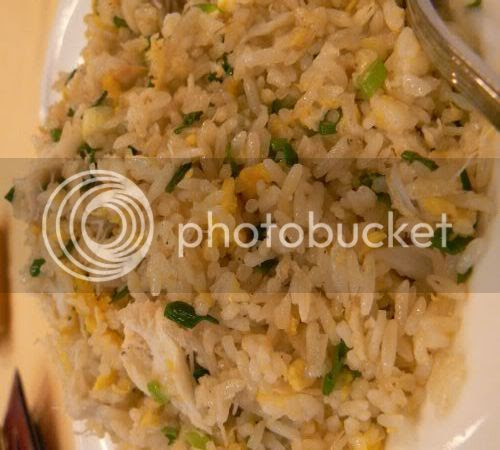 My friend was really hungry hence he ordered a small portion of the Crab Fried Rice (RM10++) - we both didn't think it was good as the rice grains was too soft. Usually for perfect fried rice, you need to use overnight cooked rice which is allowed to dry out. We suspect they use freshly made rice for this dish. 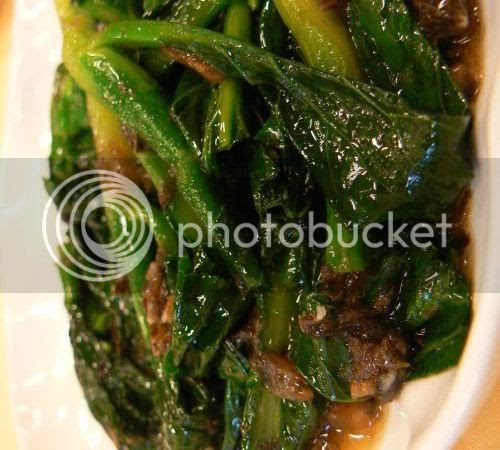 Once the rain subsided, we started ordering dinner almost one hour later. They have the two type kailan we had in Pantai Seafood but since we wanted something different, they ordered this unusual dish - kailan fried with mui choy (RM20++), a kind of preserved vegetable. 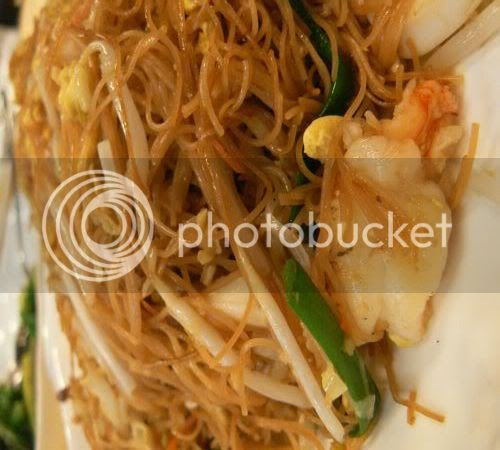 My friend wanted noodles hence they ordered this Seafood Fried Mee Sua (RM15++), although it was nicely fried, the chef had added too much salt into the dish making it difficult to eat. 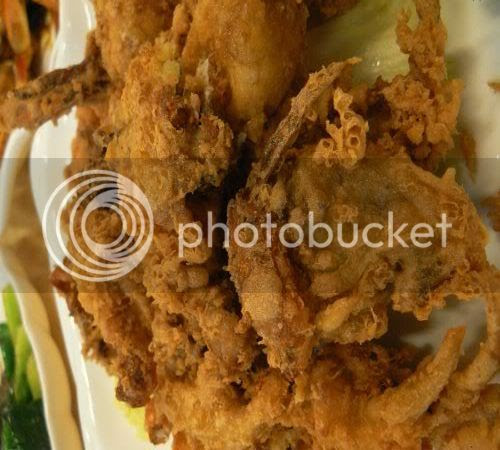 Originally we wanted to try their fried tea leaf prawns but they had run out of prawns hence we opted for their deep fried soft shell crabs (RM45++). This was nice and crispy but sadly too salty that you needed extra water to eat a piece of it. 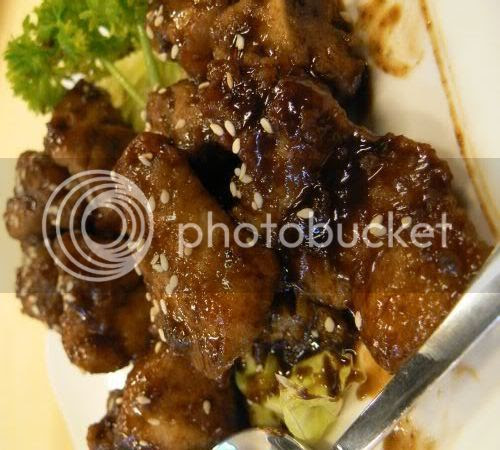 We were recommended the coffee pork ribs (RM20++) by my friend's colleague but this dish we felt the sauce that coated the pork ribs were too bitter tasting when it should be more sweet and caramelised. 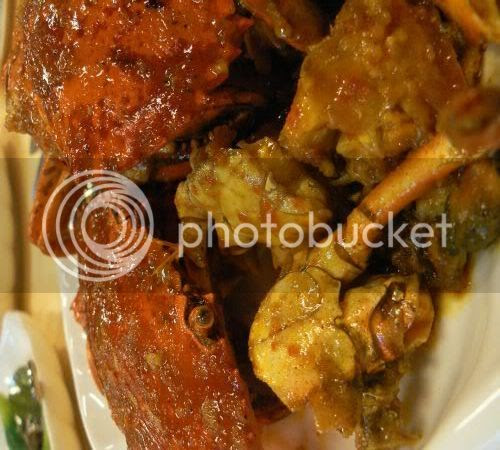 Their saving grace was the crabs which was fried with salted egg yolk (RM38++ for two pieces of crab). Although I didn't like the salted egg yolk mixture they used - it was too salty as they didn't smash up the yolks properly, the crab they used was really nice. The meat was fresh and came out in chunks which reminded me of the ones we had at King Crab. They also cut the crabs to smaller pieces to make it easier to eat. Based on their calling card, they serve 12 unique crab dishes including the Singapore Chilli Crab and Black Pepper variety.

My friends say they don't mind returning to this place as they liked the crab since it's also near the house. Only thing is I reckon you can only eat the crabs since all the dishes were either too salty or sweet. One theory we have was the chef was suffering from heat stroke that day hence his tastebuds went haywire as my friend's colleague said the food was good the last time he ate there. If any of you have tried this place, do drop me a comment as it'll be interesting to see if this was just a random incident and the food here is actually quite good.

Tagged with: Malaysian Food + Crabs + Aman Suria
Posted by boo_licious at 9:04 AM

I know why they do it that way...must be having lots of beer boozers there,
...as beerers love things salty n sweet ! ( joking only lah )

ya what happened ah ( but pixs lovely as usual )

probably de place have many golf gambling beer boozers from nearby Tropicana, as they love salty sweetie things.

( but the pixs look deliciously tempting lah,esp the fake fins !)

Did u know the best & most value fake fins r found in Yong Peng ? hehehe

yo yo yo ....the oat sotong and fried soft shelf crab look so good! I love fried food but try to cut down some these day. Arrr..the coffe pork ribs? I was trying hard to prepare this food, and turns out to be only 2 result, one was tasteless and the other was bitter as what u had tried. The coffee give lots of bitterness to the food but if u cut down the coffee portion, it's will b very mild until u can't even taste coffe. Boo.. any idea?

The food is the picture looks delicious...

I have tried the food but in Singapore restaurant though...The food generally is good and the crabs is delicious...

hmmmm..... looks like most of da dishes tasted salty and salty and salty! i don't quite like salty dishes as it will tends to make me feeling very thirsty after da meal!

sounds like its chef's day off, how sad cos they all looked so delish on print

tonixe - we were also wondering why the taste of the food was so off as the food is not too bad. That's why my friend said the chef must have been "yeet heh" (heaty in Chinese) that night.

jackson - I think they add lots of sugar to it to reduce the coffee taste. If you want I have Sam Leong's famous coffee pork ribs recipe which should be good for you to try.

tehsee - it must be famous in Spore as I saw so many celebrities dining there. Thxs for the info, their crabs are nice though.

meiyen - I had to get an extra glass of water before I ate the soft shell crab since it was so salty!

babe - that was what we thought but then it was a Sunday so kinda strange unless some emergency that day.

I accidentally viewed your blog and I was so amazed with your work that it
touched the deepness of my heart and it made me sentimental. Thanks for posting.
Visit my site too.

Aw, this was a really nice post. In idea I would like to put in writing like this additionally – taking time and actual effort to make an excellent article… however what can I say… I procrastinate alot and not at all appear to get one thing done. online casino games