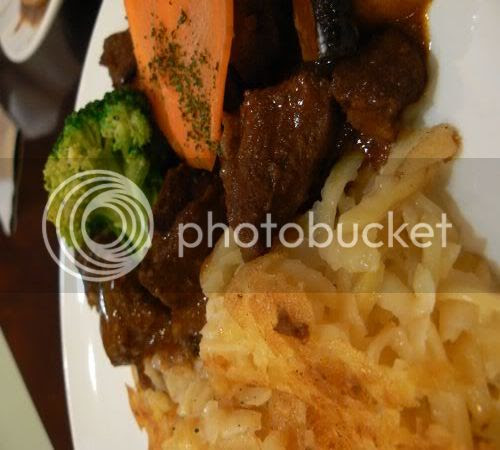 I totally forgot about this review we did a few weekends back until I trawled through my folders when I was looking for something. As all of you should know, we both spend quite some time at Ikea hence we're always eating around the area. Getting a bit "sien" (Chinese for bored) with the food they serve at the Ikea cafe, we decided to explore Ikano Power Centre.
Whenever we walk past these two cafes: Big Ben and Truffles - the wait staff seem to have do quite a bit of hard sell to get customers into their restaurants which we kinda hate. However since we were running low on options on what to eat, we decided to give Truffles Cafe's rosti selection a try since Splashie Boy absolutely loves rosti.
The cafe sells hand made chocolate truffles hence the name Truffles Cafe under the brand Chocolat World which I have seen at other local chocolate shops. Think I had them before once and they're pretty okay. They also sell chocolate dipped fruits like Chocz in Suria KLCC.
I had the beef goulash with rosti (RM16.80+) which was pretty good - the goulash reminded me of Backofen, my usual haunt when I am in Desa Sri Hartamas. Rosti was not too bad, quite crispy on both sides even though mine was slightly ruined when they moved it from the pan to plate. 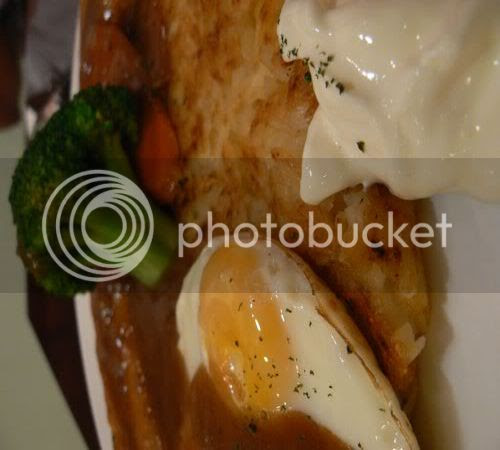 Splashie Boy had their set rosti which came with two foot long sausages and a fried egg(RM14.80+). The set also comes with an iced tea and dessert which was ice cream so it's definitely quite worth it versus my beef goulash rosti. He really loved his rosti and gave it two thumbs up.
Finding good rosti has been difficult as only a few places serve it: Marche Movenpick at the Curve, the old Oliver's Sandwiches outlets and I think recently a stall at the food court in Mid Valley Megamall. We find the one at Marche not really worth it and not as great as the one in Singapore. The old Oliver's Sandwich outlets rosti is pretty good too with similar toppings i.e. sausage, fried egg and corned beef.
So next time when you're in Ikano, try this place out for it's rosti as it's pretty good. Definitely a better deal than Marche's rosti which I frankly think is overpriced.
Truffles Cafe
Lower Ground Floor
Ikano Power Centre
(Halal)
*Disclaimer: The opinions expressed here is entirely based on my personal tastebuds and may vary for others. The reviewer also declares that she has not received any monetary or non-monetary compensation from the restaurant for writing this review.
Other reviews:
Tagged with: Rosti + Ikano Power Centre
Posted by boo_licious at 9:44 AM

do they still give out chocolates for you to sample when you sit down? i havnt been there for ages

fixedgearsailor.blogspot.com is the link. Thank you again for all the information: I'm looking forward to KL.

babe - no free chocs! Guess I know how to ask for some the next time I am there.

william - thxs for the link and do enjoy yr stay in KL!

tulan - rosti is just grated potatoes shaped in a pancake form that are pan fried till crisp. May be cheap vs other places but I think yr San Francisco and Santini set lunches are more worth it since so much meat!

Oh...my hubby absolutely loves the old Oliver Sandwich rosti...they used to have an outlet in Bangsar and he would eat them almost every Wednesday after work! They've brought it back again, but I think the bratwurst isn't very nice. Marche's food just sucks, IMHO. Have tried Truffles Cafe...their spaghetti isn't half bad!

pinks - Yr hubby has good taste. We always go eat rosti at the old oliver place too. Yeah their bratwurst is not so nice hence I usually eat it with corned beef.

It's sad abt Truffles as they seem to have lack of customers when food is not too bad. Marche KL is ruined by the operators here as the ones overseas are so much nicer! I love the rosti in Marche Spore.

I was thinking truffles as in fungi! :P

elb - nope! Truffles as in chocs but this place seems to have diversified.