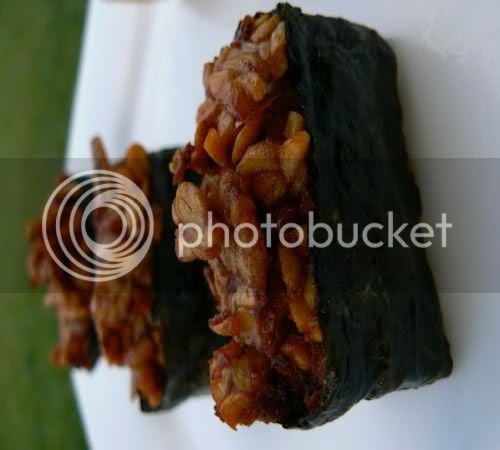 Recently, I have been really slack in participating in food events probably due to the themes which I was not too keen on. However, when I read this month's joint food event was hosted by Reid from 'Ono Kine Grindz and the theme was "The Joy of Soy", I knew I had to try and make this one even though this time round, I did take some shortcuts. I'm glad Reid is still taking in entries up to June 30th as I am one of those stragglers who can only submit now. He's already posted part one of the round-up if you want to start viewing the entries.
On our side of the world, soy plays a huge part in our daily lives. You can get all sorts of soy variants everywhere you look - fresh soya milk and soya bean curd in hawker stalls, soya sauce in everything we cook, tofu in almost all our dishes, bean curd skin in tong sui ( soupy desserts) and etc.
My savoury items for this event are teeny weeny tofu bites to whet your appetite. First, we start off with tempeh sushi that marries Malay and Japanese influences together. Tempeh is made from fermented soya beans which is sometimes used as a vegetarian subsitute for protein. It's extremely popular in Malay and Indonesian cuisine. Some people tend to avoid the freshly made tempeh as it kinda stinks but don't be alarmed as once you cook it, the smell goes away. Tempeh is usually added into vegetarian curries or coated in batter and deep fried as a teatime snack.
My favourite way of eating it is deep fried with anchovies (ikan bilis) and peanuts coated in a sticky chili sauce. I confess for this item, I took a short cut - I didn't make the tempeh myself but assembled the sushi instead. Sorry for that but since it was mid week when I made this, I was running out of time to make it from scratch. If you wish to recreate the tempeh, email me for the recipe which I have. In making the sushi base, I also had some problems as I originally wanted to make it with a cucumber wrapping but since I had bought the wrong cucumbers in my haste, I had to settle with not so crispy seaweed for the wrapping. Taste wise, was it good? Yeah, it was very good as the tempeh topping was nice and crispy that went well with the sushi rice. Would have been much better if my seaweed was crispier. 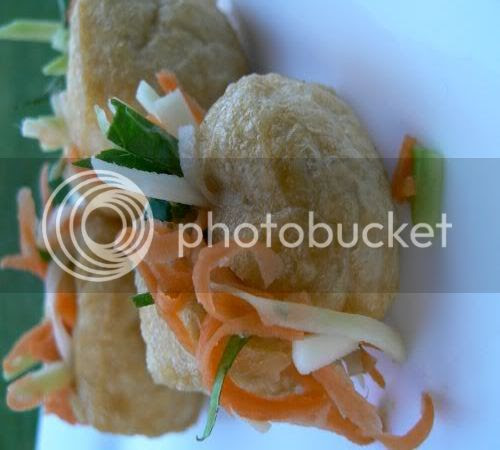 My second teeny weeny tofu offering are green mango salad stuffed tofu puffs. Stuffed tofu (tahu sumbat in Malay) is a popular snack where it's usually stuffed with bean sprouts, shredded cucumber and shredded yam bean. It's then served with a black rojak sauce made from prawn paste or chilli sauce. My version uses green mango salad instead which I had tossed in a mixture of fish sauce, lemon juice and sugar to give it the sweet, salty and sour taste.
It's quite simple to assemble as you need to shred the green mango and carrots. I also added shredded kaffir lime leaves for additional fragrance. Toss the salad in the sauce taking care to drain it a bit when you stuff it inside your tofu puffs. Down these healthy tofu snacks with chilli sauce for additional spice. 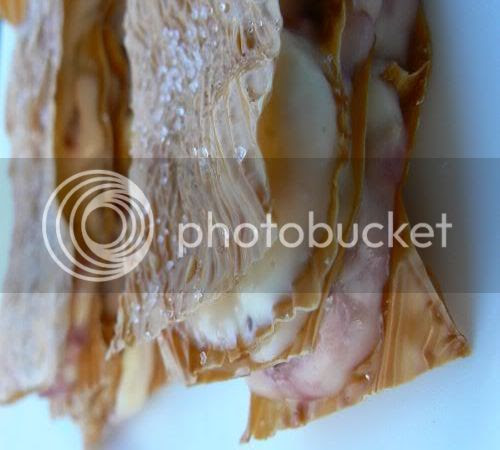 Finally we have dessert as it wouldn't be a Sugar High Friday event without something sweet. I didn't want a soy milk dessert so I decided to hit my recipe books for inspiration. After flicking through a few - soya milk curd, soya milk pannacota and etc, I finally settled on this unusual dessert i.e. the soya milk skin and strawberry millefeuille from Shunju:New Japanese Cuisine.
I was amazed with this dessert as it tasted great and was definitely my favourite among all my soy entries. It's extremely simple to make too. Although the recipe uses fresh soya milk skins (better known as yuba or fu chuk in Chinese), I used the dry version as the wet version is difficult to get. I got mine from an organic shop as it's less oily. I followed the recipe to crisp my soyamilk skins and they browned in the oven. For my cream, I did not whip it since I had bought heavy cream which did not need whipping but mixed in the yummy strawberry preserve. Incidentally the strawberry preserve is a great idea as you can use it for not so sweet strawberries. It's advisable you assemble the dessert as soon as your soyamilk skins are crisped and don't load too much cream on each layer or your millefeuille will be soggy.
Soymilk skin and strawberry millefeuille
16 yuba (soymilk skins), approximately 2 1/2 x 3 1/2 inches
2 teaspoons sugar
30 large strawberries
60 ml water
1 tablespoon sugar
200 ml heavy (double) cream
Preheat the oven to 180C. Place yuba on a cookie sheet and sprinkle with sugar and bake for about three minutes. They should be brown and crispy. Put 18 of the strawberries, water and sugar in a pan. Simmer for about 30 minutes until you have a preserve. Cool and reserve. Whip the cream until it starts to form peaks. Mix in the cooled strawberry preserve. Spread one sheet of yuba with strawberry cream, then repeat till you have 4 layers of yuba per serving. Garnish with remaining strawberries.
Tagged with: IMBB 27 + SHF20 + Soy
Posted by boo_licious at 5:37 AM

Pix of the stuffed tofu will look fab! Like cover of a recipe book!

Have no idea what those funky sounding ingredients are but YUM - the photos look so good!

wow looks delish!!! and the millefeuille is tres original!

Ur talented.. U assembled everything in a perfect way and god they look delicious! I'd never tried tempeh before..Izzit similir to japan's natto?? Natto has a strong smell too

J - millefeuille means, two pastry stuck together and filled with cream. Very ooh la la French. Yuba is just a fancy way of saying foo chuk, i.e. the skin you get when you make soya milk.

kampungboycitygal - tempeh no smell after you fry. Don't really like natto - too sticky for me.

yoo........i try to make the tempeh sushi and its heavenly taste good! Besides, i try to cook tempeh in thai style with some green peppers and potatoes cube, it taste good too.

Yr dessets looks good. But must gonna source for yuba! Hope can try it out this sming weekends!!

I love all things soy (except for the fermented beans they serve as sushi) and cant wait to try the millefeuille recipe. It sounds delicious and low fat! Perfect! Am trying out a pumpkin mousse recipe using tofu this weekend. Wish me luck!

paprika - it's not very low fat though since it uses full cream. Think you can improvise by using yoghurt or creme fraiche which is lower in fat.

wow... what wonderfully creative dishes with soy... I'm totally impressed, especially with the tempeh sushi and your strawberry millefeuille with fuchuk skin :-)

Thanks Cath! Congrats again on yr mark of fame in the NST!

I adore millefeuille - what a cool variation. You definitely succeeded in finding a new way to use soy - great entry!

libby - Thanks so much. I thought it made a change from the usual soya milk puddings we eat.

What gorgeous entries for this event. Though I loved each and every one of them, I have to say my favorite is the soy milk skin with strawberries. The sweet looks so delicate almost like the ones prepared with puff pastries. So beautiful and mouth watering!

Also thanks for your comment on my blog about fresh yuba. I greatly appreciate it. Thanks Boo!

Indira - yr pixs are great and I'm half in love with darling Kittaya. By the way, I read yr dilemma in Food Blog S'cool - think that journalist was not doing her job well at all.