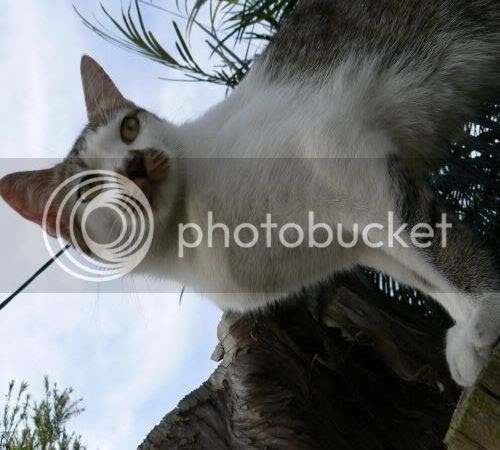 It's WCB first anniversary so we have been sharing pixs of the cats for almost a year (I joined later) and I hope you enjoy them. Clare has asked for pictures of kitty plus toy or their kitty voices. I decided to focus on kitty toys and since the boy in the house is an energetic fellow, he wanted to show his toys. First is his personal favourite - the tree house. Excellent for scratching when you feel like it or climbing up to see the world. I have this old Ikea toy from Kits' baby days - he liked to bite fingers when he was a kitten hence a soft toy was given to him. Since he has outgrown that habit, the grey and white kitty has inherited the toy horsie and he loves to play catch with it. 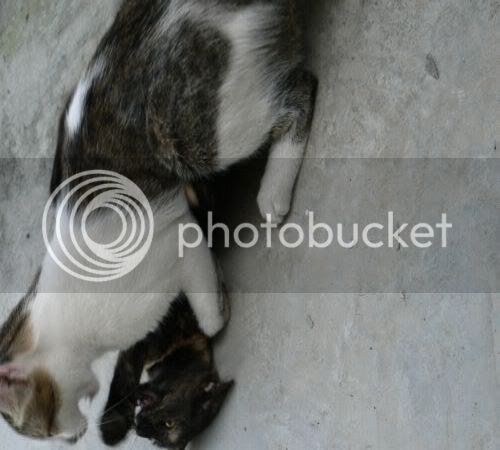 And of course, forbidden toys are the best and what's better than playing with your little sister and terrorising her! At least once a day, they will do these touchy feely sessions that make me wonder if they hate each other all the time. It's a tit for tat game, he will attack her and when she gets all riled up, she will start attacking him before he runs off.
Head over to eat stuff for a surprise plus other kitties. I wonder if Kiri has a new outfit? Thank you Clare for coming up with this wonderful idea last year as I really have fun every weekend snapping pictures of the kitties in their glory.

Tagged with: WCB52 + Weekend Cat Blogging
Posted by boo_licious at 4:18 AM

Yay, cat fight photo! Those are the best.

Hi Boo! What great photos those are. Especially the action-packed attack kitty pic:)

The first picture is so cute and the cat fight one is really terrific; great!!!

hehehe
What a bad kitty!!!
Love the horsie toy :)

I have one whose favorite toy is other cats, as well. He is a terror, but so lovable. Wonderful photos!

Love that kitty-in-attack-mode photo. Two of my cats are siblings, and they used to do the same thing to eachother all the time.

Grey and white kitty has such a cute face! Looks like he stuck his nose into something.

Two of our cats are brothers, and they wrestle with each other almost every day. As long as the wrestling is quiet (no yowling or hissing), I know they're just playing.

shannon - scary how they fight esp since the other one is smaller than him.

it's only fuel - luckily he was cooperating last weekend.

cat_aunty - yeah, he is such a sweetheart.

rosa - he looks so handsome in his first pix.

clare - horsie toy is his fav. He throws it around all the time.

lisa - haha, save money and no need to buy new toys for them as they love to play among themselves.

kristi - they're from different litters but still consider both of them as siblings.

kimberley - he looks like he did not wipe his face! He's really sweet. I always hug him and he loves it to pieces unlike the other cats.