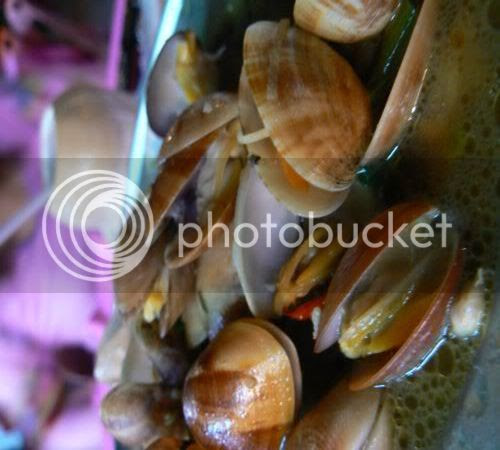 Last night a group of us decided to have dinner at this seafood place which was chosen because a friend of ours was working around the area. My first time eating here and the food is not too bad. Even though it was a non weekend night, the place was quite packed with diners. To start off, we had their signature Siong Tong Lala (Lala in Superior Stock) which was pretty good especially the soupy bits that came flavoured with ginger shreds, chillies and rice wine. 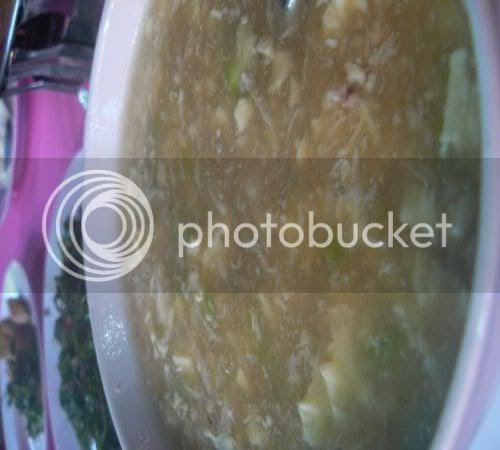 We were recommended their Tau Foo Kang i.e a thick soup which has tau foo cubes, sea cucumber, crab meat and prawns in it to resemble the shark fins soup. Although there was not much seafood in it, it was pretty good and we all finished the soup. 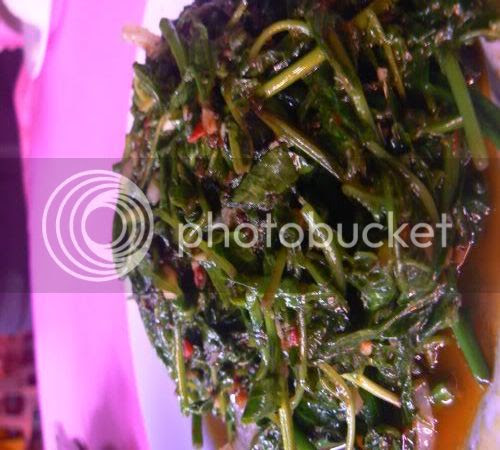 We had the fried sotong (calamari) which was pretty good as they were no rubbery bits which I warned them not to serve us any. It's still not up to Muhibbah standards but I thought it was not too bad. 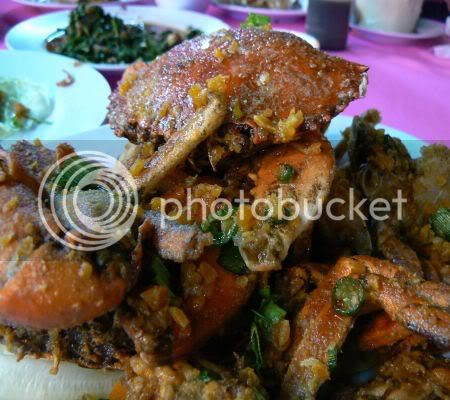 On my friend's recommendation, we had their Marmite crabs which came in a lovely sticky sauce coating the crabs. This was yummy and we all polished them off leaving only one crab piece for my friend to bring back to her dog for his present for the day (It was the dog's birthday yesterday). Pricewise, I didn't take the bill back as my friends had spent me dinner (thanks so much!) but my friend did remark that the crabs were a tad bit expensive as they had charged us RM40 per kilogram. It was lots of fun and we stayed for a long time slowly eating the crab (the best way to savour them) while catching up with each other as the last time we met was quite some time ago.
La-La Chong Seafood Restaurant
Lot PT 6824, Terminal 3,
Abdul Aziz Shah Airport
Subang
Tel No: 03 - 7859 1906
(For the location map, check out the Sun's write up. The place is pork free)
*Disclaimer: The opinions expressed here is entirely based on my personal tastebuds and may vary for others. The reviewer also declares that she has not received any monetary or non-monetary compensation from the restaurant for writing this review.
Tagged with: Malaysian Food + Seafood

Yup, the 'siong tong lala' is definitely yummy. But do not order their "suet san fei woo" (the flying fox of the snowy mountain?), which is basically red grouper baked in salt. It sucks.

Thanks for the tip papi. Will definitely not order that dish. Their recommended tau foo kang was pretty nice.

ohhh i heard about this place so many times! thanks for the tips! the food really looks fabulous!!

think i've been there before, not a bad eat. but why no map? :P

Wow, you worked fast! Didn't expect you posted it right away. Glad we all enjoyed ourselves.. hmmm..the place seems pretty well known and popular huh?

joan - I've also heard a lot abt this place. Finally got to try it out and it's pretty good. Hope you'll try it one day. Suspect that it's very packed during the weekends so u may want to go early.

tummythoz - my friends say the BB Seafood place is better? True or not?

jess - u so kan cheong abt the pixs mah hence I decided to post them today. Glad that Ms. Jelly liked her crab stick.

puspha - thxs for the tip! Will try Jalan Alor one day.

My gang just planning to go there this coming weekend, but not sure true or not. They've been there few times already, overall comments are good.

tulan - what a coincidence, looking forward to yr visit. You not watching footie this weekend?

Argh! After missing all the tapas and amazing food I had in Spain, I just had to see all this! :( Evil boo! (joking!!)

OMG!! It's my favourite makan place. I lurve their seong tong lala and sweet and sour crabs are a MUST.

Don't remember I tried BB Seafood before b'coz err.. where is it-ar?

It's a great balance of that chinese herb taste + rice wine.... the lalas are always a bit on the small side tho...

tummythoz - BB Seafood is next door to Lala Chong. My friend say it's better as nowadays they eat at those places everyday.

J - they had the bigger ones. We opted for the medium size ones.

I did, I did!! Hope to post the pictures today :D

Lala Chong has opened an outlet in ARA DAMANSARA, just off Saujana crossroads on the way to the old Subang Airport... It's supposedly much quieter and less hectic.

This place always crowded and their Lala soup is superb nice.