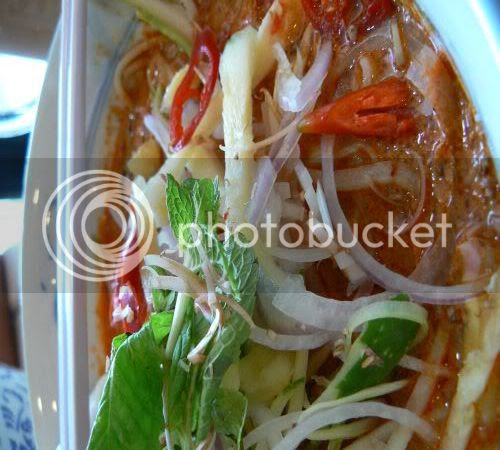 Every time I walk past Uncle Lim's at Ikano Power Centre, it's always packed. Since we both hate to wait around for our food, we tend to avoid it. I finally had the opportunity to try out their food last weekend when I spied an outlet at Subang Parade. Incidentally, Subang Parade has gone through a tremendous facelift; everything looks sparkly white and freshly painted now plus there's a Cold Storage supermarket.
Unlike the Ikano Power Centre outlet, the Subang Parade branch is much bigger so it was a breeze to get an ideal spot to take pictures. I ordered their Laksa (RM7.90+), which I have heard about. It's essentially Johor Laksa with spaghetti and thickish curry sauce laden with mackerel pieces. Initially, the laksa was pretty tasty but it got too rich after a while hence I had trouble finishing it. 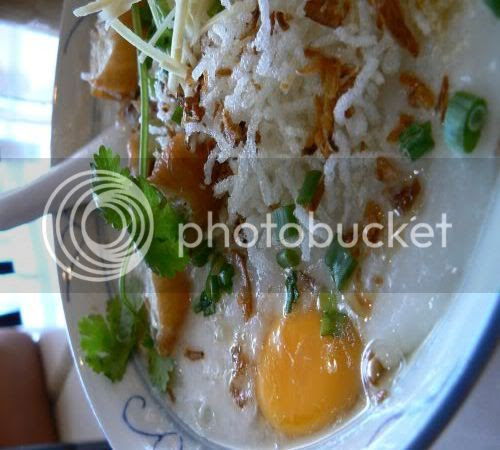 Splashie Boy had their Chicken Porridge (RM7.90+) which was good and laden with chunks of chicken. The porridge texture was thick and I liked the crunchy topping of fried mung bean noodles and yau char kuai (Chinese crullers). 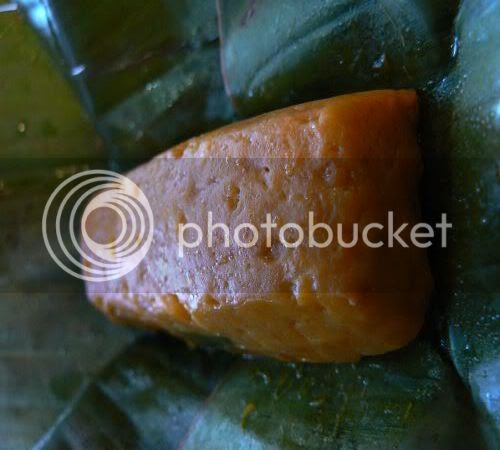 We also had the steamed otak otak(RM3.50+) which came wrapped in banana leaves. I wasn't blown away by this and thought it was slightly overpriced considering the size of it. I tend to prefer my otak otak chunkier hence this version wasn't my favourite. For drinks, I had their Cham Ice (RM2.80+) (mixed tea, coffee and milk) which I really liked while Splashie Boy settled for Cincau (RM2.50+) since he hates coffee.
Coincidentally, I had dinner with a friend last night who also recently ate at Uncle Lim's. They just started (i.e. this week) to serve Prawn Mee that is slated for a limited time. She tried it out on Tuesday at the Ikano outlet and said it was horrible. The soup broth lacks taste and they served it with sotong/prawn balls that were not cooked properly. Not sure if it was a mere hiccup to their system but if that's the case, they had better rectify it or else it will definitely be a huge flop.
Uncle Lim's
Lot G27G (1) and (2)
Ground Floor
Subang Parade
Tel No: 03 - 5631 4188
(Halal)
*Disclaimer: The opinions expressed here is entirely based on my personal tastebuds and may vary for others. The reviewer also declares that she has not received any monetary or non-monetary compensation from the restaurant for writing this review.

Wah my Subang Parade has been given a facelift and now with Cold storage supermarket there too. I miss my Subang Jaya. I used to take my kiddies for porridge after picking them up from their daycare. I used to eat Uncle Lim nasi lemak and otak-otak. I really miss my Malaysia and their shopping convenience and food place.....

elb - The laksa is ok but I think they shld warn people it's the johor version and give less of it as it was so rich and artery clogging. It's doing really well though - 4 outlets now.

flower - yeah, u won't recognise it's white colour as we are all used to the cement grey look it had.

Tried the Ikano branch. IMHO the food is only so-so. Mistakenly took for granted laksa would be the Penang assam laksa type - sourish. Turned out too lemak, so cannot finish.

I found the laksa too rich, but porridge is delightful. Only complain is their servings are too big. They should scale it down and price it a little lower.

Boo
You are from around SJ too is it? Before I cant stand the jam and the traffic in Subang. But after being so far away for so long, I do miss the traffic, the bustling town and the convenience of shopping in Subang Jaya/Parade. It so alive. Make me want to come home and see it for myself.

:-) Yay, thanx for posting my opinion! Yes, indeed the prawn mee was horrible - the mee wasn't properly cooked either, it was hard in parts. And the coffee was way too sweet. In the end I struggled to finish 1/3 of each and crawled home to sleep hungry (better hungry than to eat the stuff!).

I had a bad stomach ache @ food poisoning when I ate the chicken porridge at IKANO. I think I was given 2 days MC.

Hmmm...
Uncle Lim's is like a fast food joint serving Malaysian food though, isn't it? So it's normal for the food there to taste only "ok" cos they make up for it by serving it super fast.

I personally find the otak-otak a bit tasteless and (for lack of a better word) squishy though.

wmw said...
This comment has been removed by a blog administrator.
3:11 AM

Found your foodblog from friedchillies.com. I find the food from Uncle Lim's so so. Hee hee...your pic of the otak-otak is similar to a pic I took of Ikea's Chilli Dog which I posted on my blog. My blog's not a food blog but I love food, so, postings on food are quite often. Nice blog and pics - keep up the good work!

fulltime mom - yes the portions are huge! Could not finish the laksa at all.

poor mau, nvr mind you had a nice and satisfying dinner at Paris that night.

J - the otak otak was my least fav. I don't think if they are fast their quality is compromised. If you see Little Penang Cafe - their food is excellent and they serve it so fast.

wmw - welcome! Glad that you are getting over yr eye surgery and such yummy pictures of Cheras pasar malam. May have to consult you on the Cheras area one day as I have little knowledge abt the place.

thick frame glasses ping - this version is the johor laksa so don't have the assam taste. I have tasted Muar otak otak, I prefer the Penang version which is chunkier though.

to Boo:
Yup.
A restaurant that's Fast + Good taste + Affordable price + Friendly service is so rare tho! When you find a place like that it's such a pleasure.

J - yeah, most restaurants are always so so. Only one out of the many will be excellent. Sad how the food industry is.