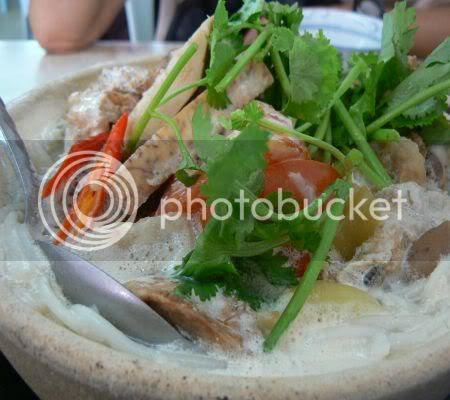 I was introduced to this place by my mother whose friends brought her here one day. It's pretty easy to find this place which is just off Jalan Kuchai Lama. They are famous for their XO Fish Head Noodles which is a must order when you visit here. Unlike the other fish head noodles in town, this one is tangy as they add sour plum, preserved salted vegetables (Ham Choy in Chinese), sliced chillies and sliced tomatoes. They also add fried yam which is a must for Hokkien people. On the XO sauce, it seems it is a sauce they add in which gives the soup an extra oomph but you can't really see it.
I really love their version as the tangy taste cuts through the richness of the dish which comes from the addition of evaporated milk to the soup. Mash the tomatoes in the soup and slurp it all up including the thickish noodles they serve it in. A small claypot (RM14) can probably feed two hungry individuals. 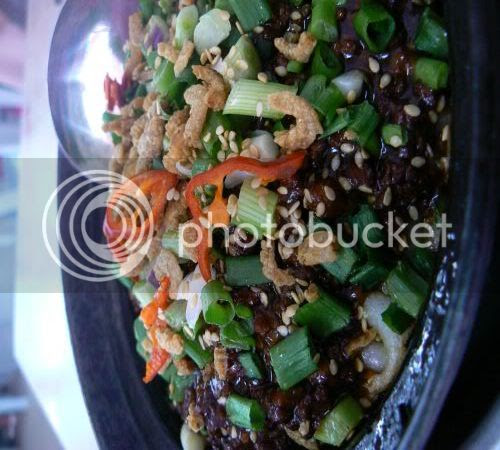 This place is also famous for their version of Claypot Loh Shue Fan (i.e. Rat Tails Noodles). Unlike the extremely notorius dish found at Seng Kee, Petaling Street or their branch, Mama's Kitchen in Taman Tun Dr Ismail, this version is less oily, the minced meat topping is drier and has lots of fried dried prawns. The Seng Kee version has minced meat, chopped liver and prawns which makes the topping have less bite to it. At Seng Kee, they add a raw egg on top of the minced meat topping to be mixed in while this place adds the egg in the claypot first before topping it with the noodles which cooks it thoroughly. A small claypot (RM4) was ordered to test it's taste while the rest was packed back. Even after a few hours, the noodles still tasted great.
The restaurant is well known for catering to special functions and they have a pretty extensive menu. You can also get tong sui here i.e. fu chok yee mai. Other popular dishes are their Kow Yoke which looks like the Esquire Kitchen's Tong Po Yoke that is served with steamed buns, fried noodles and fried rice.
Restaurant Goon Wah
G13, Jalan 3/115C
Block KP2, Taman Kuchai Jaya
Off Jalan Kuchai Lama
58200 Kuala Lumpur
Tel No: 03 - 7982 0048
(If you are coming from Old Klang Road, turn into Jalan Kuchai Lama. You'll pass a traffic light and a school known as Sri Setia Primary School on your left and on a bend. Once you round the bend, you will see Shell and Esso petrol stations on your right hand side, turn right after the two petrol stations. Go straight down the road and there will be a row of shophouses on the right hand side which is where the shop is.
Alternatively you can use the NPE. Take the Jalan Kuchai Lama/Sg Besi exit and you will end up at a traffic light near Ajinomoto. Take a right turn and drive down the road, you will pass by KFC and Six Happiness but turn left only when you see the Esso and Shell stations,)
*Disclaimer: The opinions expressed here is entirely based on my personal tastebuds and may vary for others. The reviewer also declares that she has not received any monetary or non-monetary compensation from the restaurant for writing this review.

Last visit, friends & I unanimously agreed that Seng Kee is getting from bad to worse.

tummythoz - dunno as I usually go to their TTDI branch.

Quote: you will pass by KFC and Six Happiness but turn right only when you see the Esso and Shell stations

aiks, sorry bernard. It shld be turn left when you see Esso and Shell stations. I better go amend it now.

Would love to try...but how does one get there from Bukit Bintang in the direction of Federal Hotel...Thanks guys

Great review you have there. I've also made a short review on the place and am getting other to rate the place. Would you care to drop by and rate Goon Wah at my site? The URL is as below.

I would like to cordially invite you to submit your content to the eatgod report. All you have to do is to fill in the form at the URL below this paragraph.

The list is still new so be the first few to be on that list! Get your friends and family to rate your post on this article. With this contribution you will be listed our foodie list ranked amongst the other foodies in the Malaysian blogging scene.

Furthermore you get a FREE link from us. No obligations!

If you are interested, do head on over to the form with the URL below.

If you encounter any difficulties, you can contact us at the email above or you can tweet us @theeatgodreport

P/S - You can submit other food reviews as well. There is no limit!

For all fish head noodle lovers.
a must eat option. Fish fillet unique meehoon. the name says it all. Big fish fillet and they use a special meehoon for this dish. Soup is best of course.
locate at subang jaya ss15 called cassian kitchen cafe.
www.cassiankitchen.com.my
they got map. if those familiar with ss15 subang, it's further down uncle seng only. easy to find.