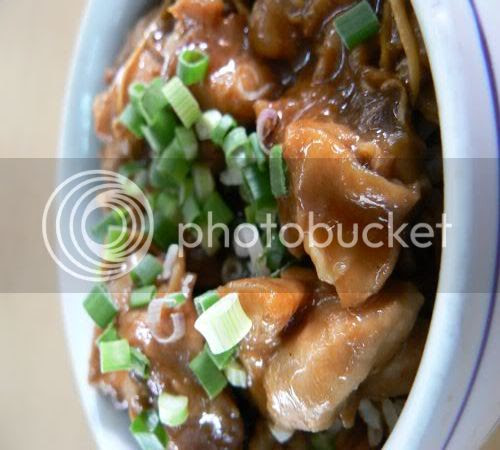 The weather is driving me crazy - one minute it's super hot and then it starts to rain. Not good for me as I have caught a cold which does not seem to be going away. Since I have been craving for lots of liquids, I decided to have the steamed rice and soup one day. This corner coffee shop located behind the Giant supermarket in Kelana Jaya is always packed during lunchtime since it's full of varieties plus it's the only coffee shop around the area. One of the more famous stalls is this Ipoh Steamed Rice stall which has been featured in Flavours magazine and Chinese magazines.
They serve a variety of steamed rice dishes whereby small metal plates with the ingredients are steamed seperately. Once ready, they are placed on top of the steamed rice. I like their steamed rice as it's nice and fluffy. There are different varieties of steamed rice to choose from i.e chicken with chinese sausage, chicken with salted fish, chicken with mushroom and etc but I had the chicken with ginger (RM4) that was full of flavour. 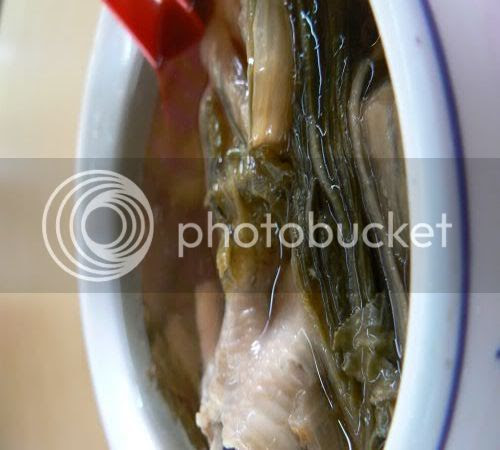 I also ordered the steamed soup with dried vegetables that is cooked with chicken legs. (RM3.50). They also have a few varieties of soups i.e. herbal soup, old cucumber soup, peanut soup for you to chose from. I like their soup as it's not as oily compared to the steamed soups you can also get at claypot rice outlets.
Restoran New Yew Seng Seafood
18, Jalan SS6/8
Kelana Jaya

(Location map - refer to KY Speaks per link below who has an excellent map)
*Disclaimer: The opinions expressed here is entirely based on my personal tastebuds and may vary for others. The reviewer also declares that she has not received any monetary or non-monetary compensation from the restaurant for writing this review.

Other reviews:
Tagged with: Malaysian Food + Steamed Rice
Posted by boo_licious at 5:51 AM

Great for students away from home that miss mummy's cooking!!

Yeah, you're right as it kinda reminds me of home cooked food.

I like dried vegetable soup. It goes well with steam rice. Yummy.

flymeng - yeah! I also love to mix my soup with rice.