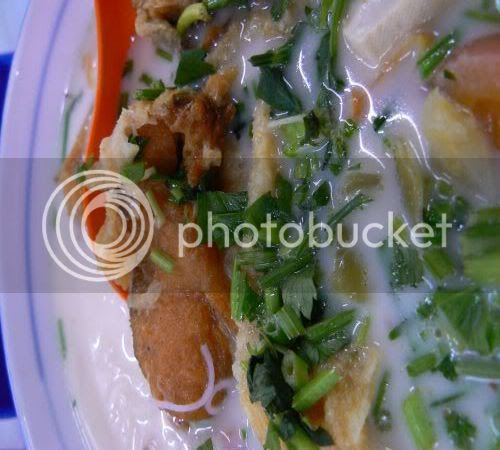 One day, I ended up at Jalan Alor, KL's famous red light district and hawker food centre for an extremely late lunch. Since it was so late, almost 3 pm when I walked down the street, most places were either closed or had not opened for the night session yet. The only place which was bustling with people was this shop that sold fish head mee hoon (Yue Tow Mai Fun in Cantonese), Curry Laksa and Seafood Tomyam Noodles.
Hence I decided to give the noodles a try since I wanted something different. The fish head noodles(RM6) came with large chunks of deep fried fish head pieces dipped in a floury batter. I liked the fish which was fresh. However, it was full of bones so it was a slow process eating it. The soup base is made from fish stock or boiling the fish head pieces and has a dash of evaporated milk, ginger slices and sliced tomatoes. Overall, I thought the noodles was pretty decent but not fantastic for me to revisit the place. For me, the ultimate fish head noodles is still from Ka Soh.
Restoran Shui Kee
21A, Jalan Alor
Kuala Lumpur
*Disclaimer: The opinions expressed here is entirely based on my personal tastebuds and may vary for others. The reviewer also declares that she has not received any monetary or non-monetary compensation from the restaurant for writing this review.
Tagged with: Malaysian Food + Fish Head Noodles
Posted by boo_licious at 5:18 AM

i think the same too but the shop next door or was it a few doors away serves delicious pan meen, munn yee meen, loh meen...

eh, did not know there is this place in jln alor... must check it out then :)

actually singapore do serve pretty good fish head soup or noodle. but must really know where is the place , haha..

Didn't know they r opened at night too (I blogged about it for breakfast). My current favourite are at Adai Rest (Pudu) & Robson Rest (off Federal Highway).

hi.. would you be interested in dining at my cafe? Its at damansara perdana.you can bring yr friends.. if u interested, pls email ejaz@gemarimba.com
thanks

is the ka soh at midvalley city as good as the kl one?

not sure which shop is that....havent really been out makaning in KL / PJ area. Think I'm beginnning to turn into a SUAH KU

gosh, u guys have a KaSoh also in KL? Wonder if it's connected to the Ka Soh restaurant in Singapore too, the top-selling item also being that fish beehoon milky soup?

babekl - the one nxt door is said to have nice curry noodles but no one was eating it at all so very suspect.

tummythoz - They were packed at 3pm! Strange as it was the only place full of people at that hour.

ejaz-kajum - sounds good. Read yr blog it's at perdana view condos. Must admit that I rarely wander up Dsara Perdana though. Once it's up, let us know and we'll toodle over to do a very annoymous review.

kampungboycitygal - no idea as I usually eat at the Ka Soh in Medan Dsra i.e. behind Victoria Station/Jake's Charbroiled.

foodcrazee - can't expect you to eat at places mah, you're stuck up that big hill!

cath - really? Don't know if connected or else my brother would have mentioned it.

U have been tagged. Check out my blog

Ha ha ha... this noodles really quite nice, but I hate the bones so much!

the nice curry laksa hv shifted to further down the road. the shop is the intermediate corner, name of kopitiam is dimsum something. the stall name is sister's noodles

puspha - thxs! I am hopeless in memes though.

tekko - I know! I hate them too and have to eat slowly.

babe - thxs for the tip.

ooops, very sorry carcar. I think I had to retype my comments the 2nd time round and I missed yrs.

Spore hawker food is always nice esp if you know where to eat. Don't think I have eaten fishhead noodles there though. Where's a good place to try out?

oh...i see i see.
hmm, there is one hawker centre near my work place is selling a pretty good fishhead soup. the aunty very frenly :)
they add the 'hua diao jiu' at the very last stage, so it tasted nice.. and if u request for more of it, they gave it freely, hehe and they have seaweed on top of it too.

oh ya, forget to say thanks. for coming back again to reply me, i sound so 'xiu hei' previously, pai say :P

you are a very good food photographer, and writter.

carcar - no problems! Spore does have great food - think near Holland Village there is a famous XO fish head noodles rite?

This is Gel Mariscotes, Researcher of GMA Network Inc.( Mel and Joey) Philippines.


This September, we are celebrating the 4th anniversary of our program hosted by the award winning broadcaster Ms. Mel Tiangco and comedian/ singer host Mr. Joey De Leon.

In line with this, we want to ask if you could help us to get the contact number of the RESTORAN SHUI KEE owned by a Filipina named Jane Manalo-Tan. We want that restaurant to be feature in our show.

Our tentative schedule to go to Malaysia is by last week of August or first week of September.

We are hoping for your favorable response.

Thanks and God Bless!