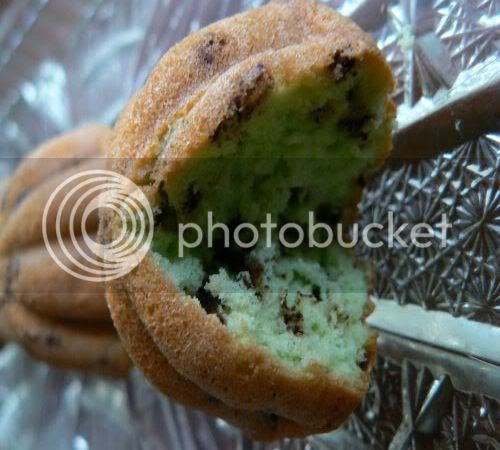 Last weekend when we were at 1 Utama Shopping Centre, we stumbled upon the Agricultural Fair. It was pretty good as they had lots of stalls selling local fruits from the government run farms. We bought rock melons which were nice and sweet. Besides the fruit stalls, there were also stalls selling local food i.e roti arab, cakes, snacks and etc.

We were extremely attracted to the Bahulu Classiq stall as they had brought in an oven and was whipping up fresh bahulu that smelt great. For those who have never heard of Bahulu, it's made from a mixture of flour, eggs and sugar that is cooked in brass or iron moulds. You can get them in different shapes, the traditional flower or button shape and even goldfish shape. Texture wise, it's spongy on the inside with a slightly crunchy crust. Traditionally it was cooked under a kerosene fire but nowadays everyone bakes it in an oven. 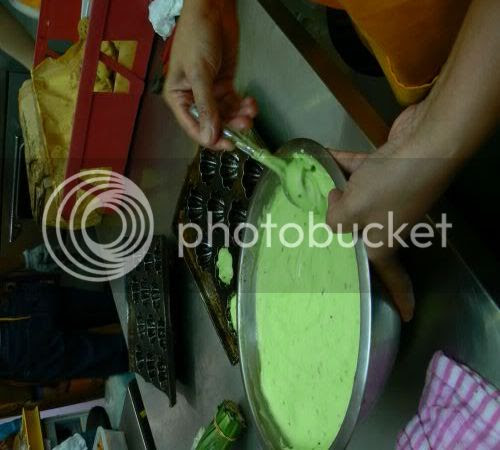 What was extremely unusual with this stall even though there were others selling the traditional Bahulu was their version with Pandan flavour and chocolate chips. They had cut the bahulu to small pieces for people to try and it was really good hence we bought two boxes. There was a small assembly line at the stall with a mixer to make the bright green batter and a lady sitting at a counter spooning the batter into the moulds. The moulds will have a bit of oil in it that is dabbed with the pandan leaves brush. Not sure if you can see the guy behind with the glove but he is in charge of putting the trays in the oven and taking them out later. Once they are done, the bahulu is knocked out from their moulds and placed in a basket to cool down.
If you eat them when they are hot and fresh, they taste fantastic. Leave them for a while and it's still yummy especially with a cup of coffee that you can dunk them in. Splashie Boy calls them Malaysian Madelines as they have a similar crusty exterior even though they don't have any butter inside them. The stall was doing brisk business and besides the Pandan flavoured bahulu, they also had a capuccino flavoured one and the plain ones. It seems their factory in Hulu Langat can churn out 30,000 bahulu a day which is for export purposes.
Bahulu Classiq
I.A.D.Z Enterprise
Baru 18, Kampung Jawa
43100 Hulu Langat
Selangor
Tel No: 03 - 9021 1131
*Disclaimer: The opinions expressed here is entirely based on my personal tastebuds and may vary for others. The reviewer also declares that she has not received any monetary or non-monetary compensation from the restaurant for writing this review.
Tagged with: Malaysian Food + Bahulu
Posted by boo_licious at 8:51 AM

i agree with u on their bahulu, i've tried the plain one as well but the pandan one is more fragrant.

When I was kid, I helped my mom make kuih bahulu during CNY. She made the batter. I was in charge of the burning charcoal. It was a lot of fun since I like playing with matches and fire. Once the charcoal is burning, I would put the batter into the iron cast pot with sunken mouldings, close the lid and let it cook for a few minutes. Then, I would scoop out the cooked kuih. It was yummy and fun.

babe - it was selling like hot cakes that day! Very nice.

flymeng - wow! Sounds like great fun and nice also as you get to eat them hot and fresh.

thats nice....gonna get some from BEntong and try them out. Apparently its nice that even sultan pahang buy from them.. will see how

Ooohh, I wouldn't mind having a taste of that! They look very yummy!...

I remember my grandma making these for CNY! If only I could try the pandan ones.

U have been tagged. Check out here

hi, i bloghopped from julia's website. i love your blog, very informative and makes me hungry with all that food! too bad i'm not a malaysian, otherwise can try out all your recommendations! anyway i'm an avid baker & foodie myself, do check out my blog if u hv a little time.

BLOG REVIEWS said...
This comment has been removed by a blog administrator.
7:18 AM

foodcrazee - wow! They must be very nice. Do blog abt that as I am sure it'll be interesting.

rosa - they were! Even ms kitty wanted some.

cin - maybe u can find them in Australia as these ones are for export purposes.

puspha - thxs. Must set time to do it.

bossacafez - welcome! thxs for your link.