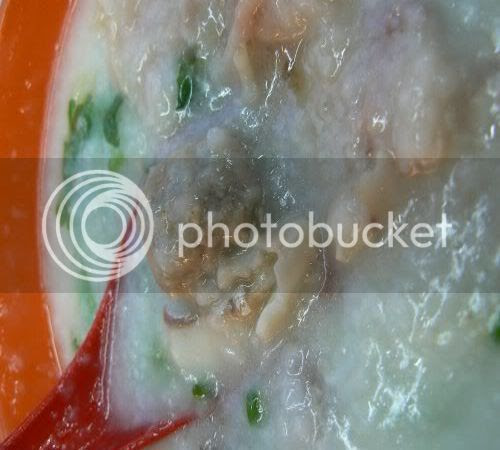 I'm finally over my flu bug but it got me hankering for porridge for breakfast. I'm partial to the porridge found in Cecil Street (or Jalan Hang Lekir as it's known now), Petaling Street which is my standard of great porridge since it's the place my parents took me since I was a kid. I love wandering around Petaling Street in the early morning as it's nice and quiet without the bustle of the stalls that sell their fake luxury goods. 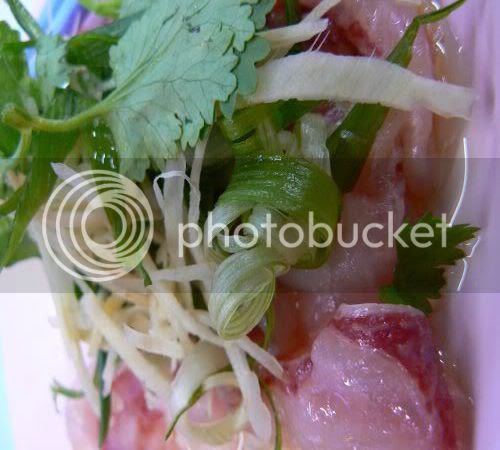 The raw fish slices (Wan Yue in Chinese) is always served with a dash of sesame oil and lots of shredded ginger, spring onion and coriander. Just plonk it in your hot porridge and they'll cook themselves. Accompany this with a plate of sliced yau char kuai (Chinese crullers) and you'll be in heaven. I love the smooth texture of the porridge as they cook it on slow heat hence it's nice and smooth. 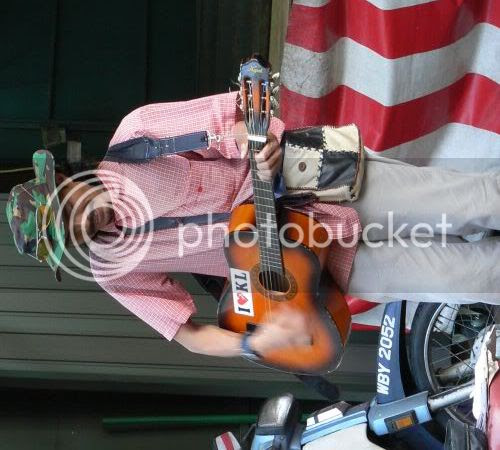 Of course there will always be changes with time and nowadays when you have your breakfast, you can be entertained with live music. It was quite strange to see a busker early in the morning since they usually play at night but this fella was happily strumming out oldies like Rod Stewart's Sailing and even old Malay songs.
If you're feeling very adventurous, take a walk after your breakfast. Turn right at the first alleyway after the porridge stall (where they are frying the yau char kwais) as you will see fresh wantan mee being made in a small factory. They don't really allow you inside the place but you can peek in but they sell the freshly made wantan mee, pan mee, yee meen outside. Walk further down and you'll see lots of foreign workers hanging around make shift stalls where they are said to peddle stolen goods. You'll see items like shoes which have been pinched from people's backyards, clothes, electrical items and all sorts of things. However, be warned that it's not exactly a very safe place so be cautious when you walk through there. If you walk the other side of the stall towards Malaya Hotel, you will find Madras Lane market inside the alleyways where you'll see all sorts of fresh produce and items especially those enormous fish heads sold to steamed fish head stalls.
Hon Kee Porridge
Jalan Hang Lekir (Jalan Cecil)
Off Petaling Street
(Next to Koon Kee Mee, opposite Hong Leong Bank Berhad. Opens from 5am to 1pm)
*Disclaimer: The opinions expressed here is entirely based on my personal tastebuds and may vary for others. The reviewer also declares that she has not received any monetary or non-monetary compensation from the restaurant for writing this review.
Tagged with: Malaysian Food + Porridge
Other reviews:
Posted by boo_licious at 5:41 AM

Pork balls and yaw char kwai are a good combo for porridge. I like fried intestines too.

ooh...how come I missed this stall?? Must check it out next time I am at Petaling Street.

dont you just LOVE petaling street area in the morning!!! the wet market in the alley, the porridge, the chee cheong fun in the corner stall, (i was observing them one morning, and i reckon they earn about 60-70K a month, based on RM3 a plate, and dishing out 3 plates a minute), koon kee wantan mee, madras lane curry mee (which i havent tried)... and the flowers and fruits..reminds me of that scene from my fair lady.

i have my breakfast here sometimes too, but usually i eat the chu cheung fun next door. i wonder if i've bumped into you :D

Oooh, I never miss having my early morning Hon Kee porridge each time I take the early coach to Penang. My favorite is the fish porridge, raw or otherwise. And I've met that singer several times too, trying very hard to earn a buck or two.

Yum yum! There was once me and a friend did sleep ...the only place i could think of was Hon Kee! I love the meatball, century eggs and sang yue mix all together.

Can't even remember my last time to Petaling St in the morning. That porridge sounds good so it's time to do it soon!

been ages since i last went there, this porridge is by the road side wan rite?? always crowded with ppl.. wonder is it the same one as the one u mentioned!

flymeng - I haven't eaten the fried intestines one for ages.

de book worm - quite easy to find, walk down Hotel Malaya and where the flower stalls are and it's there. They have signs saying Hon Kee porridge.

fatboybakes - I saw the chee cheong fun stall but did not try as my mother usually takes me to the one inside the market.

babe - what a coincidence. Maybe we have bumped into each other before.

teckiee - that combo sounds yummy too.

tummythoz - yeah, people like to go at nite but I prefer the quietness in the morning.

joan - they put the tables at the side of the road. Only in the morning. At night, it's the one at Jalan Tun HS Lee which is famous.

Oh another one got the flu... just a health tip, drink vitagen, nutrigen or any cultured stuff including yogurt should help keep the flu bug away, then u will be able to taste your food better :D Has helped my familt and I a lot.

sorry for the error on the word family ...typing in the dark again lor.

audrey - thxs for the tip. Whenever I feel the flu bug coming on, I usually take Redoxon to boost up my Vitamin C.

I go there in the morning before 7 am and it's already packed with people eating happily. At this hour already almost all the tables are taken!

The busker, sometimes there are two of them working together, is alredy sing there at this hour!

bayibhyap - wow! 2 of them playing. Times must be bad. Yeah, it does get pretty packed with people even during the weekdays.

besides the famous beef noodle, i have no idea what are the other famous food in PS..
end up going to McD.....
next time i must find this shop