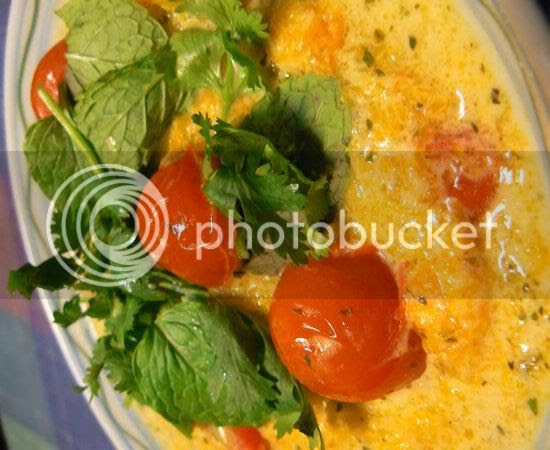 Whenever I get really fed up of eating solo, my hands start to itch to make something nice. Since there was half of a pumpkin lurking in the fridge, I decided to make pumpkin and tomato laksa from Nigel Slater's The Kitchen Diaries versus my usual standby of roast pumpkin.
As usual, I had a hitch when trying out a recipe for the first time. My pumpkin cubes were slightly overcooked - I think I shouldn't have left them too long in the steamer since they were already quite soft as it had been in the fridge for quite some time. Overcooking the pumpkin caused it to merge with the broth making it thick and orangey but it didn't affect it's taste as it was still fantastic. You can't see the noodles as they're underneath so at one glance you'll think this is roast pumpkin soup served with cherry tomatoes topped with a sprinkling of coriander and mint leaves!
To recreate this at home:

Looks yummilicious! I love Pumpkin anything and this is the first time I have seen it being used in a laksa. A must-try!

Oh btw, is it possible for you to give the exact measurement of the ingredients to make this laksa? TIA!

mycoffee - can I send u an email? Just chked yr blog and no email stated there so pls do give me an address.

what an intrigueing idea, pumpkin in laksa! thanks for the inspiration and that shot is to kill for :)

wow... looks like something out of a food mag... very very interesting.

Usually when I eat solo it's Shin Ramen instant noodles!

joan - nice right? Seems to be quite popular with a few chefs as I have seen the recipe in a number of books.

wyejon - yeah but I am sure you eat alone once in a blue moon while I eat alone almost every day hence instant noodles can get kinda boring after a while.

foodcrazee - we'll exchange? Yrs for some of your yummy food.

pushpa - thxs as I love the contrast of colours too.