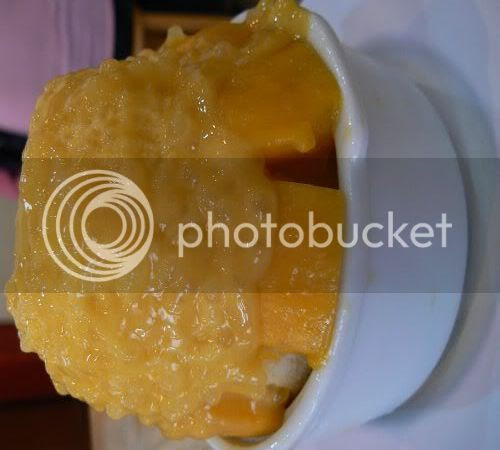 Such hot crazy days - it looks like it will rain every afternoon but no such luck! Splashie Boy and I keep looking for things to cool off with. Yesterday after a hectic weekend of running around for a family event which took a lot of time and patience, we managed to get some time off and decided to indulge in a teabreak. We don't usually have tea hence this was Splashie Boy's first time at the dessert shop and my second time eating here ever since it opened in SS2.
I had the Mango Loh(RM5.50+) which is essentially finely shredded ice topped with mango puree mixed with sago pearls and chunks of mangoes. I suspect they add syrup at the bottom before they top it with the ice as it was quite sweet when it's all mixed down. If you eat just the top layer with the mango puree on top, it's much nicer since it's less syrupy. 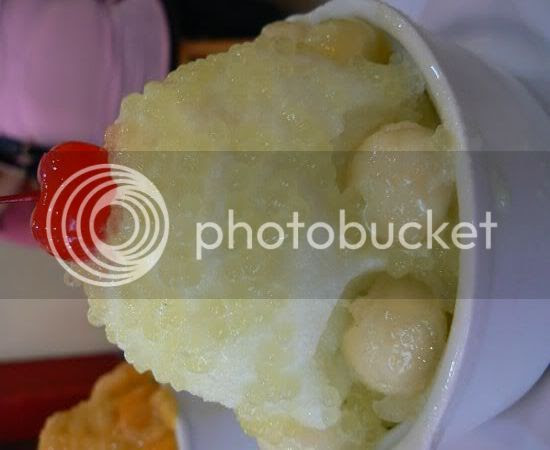 Splashie Boy wanted the Kiwi Loh but I remember reading WanTan Productions which advised that their Kiwi Loh was sour as the kiwis they used were not that ripe so I steered him towards the Honeydew Loh(RM5.00+). It's essentially the same as mine except his topping was honeydew puree and his sago pearls were green in colour. They also topped his dessert with a hot red maraschino cherry.
Although they were sweet, it did the trick as we felt pretty refreshed (must be all that sugar content!) after that quick pit stop. The place was super packed with people trying to cram in their tiny shop to indulge in tong sui, fruit lohs and snacks. This particular outlet is a branch of KTZ dessert from Kepong which is famous for their peanut butter tong sui.
Restoran The Frutti Stall
No. 22, Jalan SS2/63
Petaling Jaya
(behind Novel House - same row as Shabu Shabu King)
Tel No: 03 - 7877 2499
*Disclaimer: The opinions expressed here is entirely based on my personal tastebuds and may vary for others. The reviewer also declares that she has not received any monetary or non-monetary compensation from the restaurant for writing this review
Tagged with: Malaysian Food + Mango Loh + Honeydew Loh

Other reviews:
Posted by boo_licious at 4:50 AM

yes! I am also drooling as it looks set to be another hot day today.

nice weather up here...wanna come up ?

I have been looking at thai recipe and notice one ingredient is sweet basil. Do you know what it is called in chinese/malay and is it available locally.

Thank you in advance

I'm always hessitant to visit your site (but still do)... it makes me miss home so badly :p

The torment of "can see, cannot taste".. aarrghh!!

ahhh..looks dangerously like the one i'm craving for. hot weather i agree!

Looks delicious, especially on a hot day like today. I normally go to Beans in SS15 Subang for my dessert fix but their cold desserts are rather limited. The watercress honey drink is good, though.

there was a stall at Kuchai Lama food court sells nice "Loh" also (strawberry, mango, etc.)... but I think now no longer there already.

foodcrazee - lazy to drive up.

alyssa - sweet basil is known also as daun selasih in Malay. Can be found in major supermkts like Cold Storage and Jaya Jusco. A packet costs abt RM4.99 and is found at the fresh vegetables section.

fulltime mom - thxs for the tip. Saw the Beans place that day and wanted to try it. Now I know what to order.

tulan - I don't think I even know where the food court is in Kuchai Lama? Any pointers as you seem to be an expert there?

alyssa - here's the link for a write up on basil.

Old Klang road Parkson exit, all the way up you will see a right turn to Kompleks Bukit Jalil, DON'T take that turn, just go straight and you will see the food court on your right.

thanks tulan for the directions.

best place to head to on hot days but the kepong outlet seems to be the best in taste. well maybe bcos its a dai pai dong with zinc roof hahaha dat makes the environment great for the cool cool ice.

babe - I am lost around kepong hence I dare not venture there. PJ is nearer for me though.

KTZ! i had the 'mat tou loh' the last time i was there.. strange combination, but refreshing nevertheless.. I can't wait to go back and eat it again!! :(