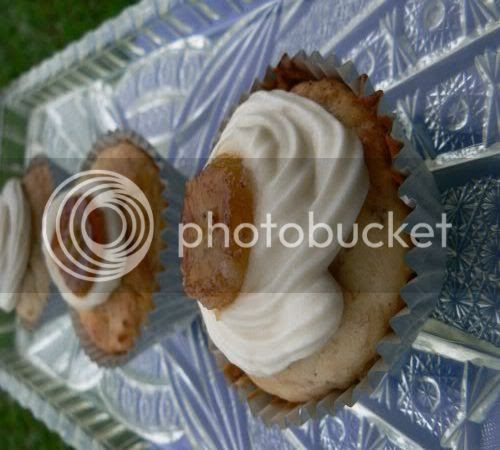 Once in a blue moon, I get the sudden urge to bake. Since we had a lot of leftover bananas lurking and getting riper by the minute, I decided to try out another banana cake recipe I have from a Her World cookbook. Unlike the first one I tried, this one is a lighter version with a softer crumb and is eggless. It's brilliant to have these kind of recipes that has no eggs as it's sometimes difficult for me to get fresh eggs unless I visit the market. Buying those eggs in cartons at the supermarket shelves just does not cut it as those eggs are usually not fresh. If you have vegetarian friends, you can also consider this recipe as their diet may restrict them from taking any eggs.
Since the original recipe was for cupcakes, I decided to stick by it since it was my first time trying it out. Although the recipe is not as straight forward as the previous banana cake recipe which was a one bowl method, this one was pretty easy too. The batter that came out was quite sticky and thick since the only liquids it had was milk. I must say, the cake was brilliant as the crumb is flaky and so light. Only complaint I had was I didn't think the bananas I used were banana-ey enough as the flavours were not so intense. Either I have to add more bananas or use a different type of banana. The next time I make these I will definitely add chopped walnuts to give it extra oomph. 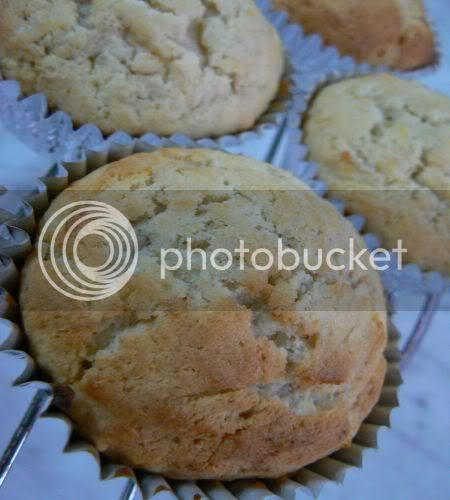 I also decided to decorate my cupcakes, something I don't normally do because I thought having it plain and unadorned looked boring especially since I saw brilliant iced ones on Cupcake Bakeshop and Scent of Green Bananas. I used a cream cheese frosting I found on Cupcake Bakeshop but it was kinda soft hence it didn't turn out fantastic. Since I had no cute and teeny bananas like Santos, I topped it with a piece of caramelised banana. Tastewise, it was yummy but it defintely needs to chill in the fridge or else the topping will melt away in our heat.
Banana Cupcakes
200 grams very ripe peeled bananas
1 tablespoon lime or lemon juice
250 grams self raising flour
pinch of salt
1/2 level teaspoon baking powder
1/4 level teaspoon bicarbonate of soda
1/4 level teaspoon ground cinnamon
120 grams butter
150 grams caster sugar
75 ml milk
Mash bananas together with lime or lemon juice and set aside. This helps prevent the bananas from growing brown. Sift the flour, baking powder, bicarbonate of soda, salt and ground cinnamon together twice and set aside.
Cream the butter until soft and add the sugar gradually. Continue beating until mixture is light and fluffy. Add the milk, a little at a time and beat well. Using a large metal spoon, fold in one third of flour, followed by half of the mashed banana, another one third of the flour, the other half of the mashed banana and finally the remaining flour. You can either bake the cake in a loaf sized tin or cupcakes. If baking in tin, bake at 180C until done. If using cupcakes, bake at 200C for 10 to 12 minutes. Since mine was a bigger size, I baked them for about 15 minutes. Leave the cake in the tin for 5 minutes before turning it out from it's pan.
Tagged with: Banana Cupcakes + Vegan

Yummy! Looks so good! Especially the little caramelised banana on the top! Can spare me one ah? Hehe...;)

Tell you what... it looks absolutely, delicious!

tulan - they are fantastic. Not too hot abt the frosting though as I like my cupcakes plain.

boo, these are soo cute! i love the caramelized banana, such a lovely touch.

santos - thxs. They're not as cute as yours. I must perfect my cupcake decorating techniques as mine just don't look as good as yours.

neutiquam erro - Sorry, I don't take orders but it's very easy to make yr own! Plus it's vegan.