Last Sunday after an exhausting Saturday we decided to take it easy. Since we had an errand to run down town, we ended up in KLCC. Our original plan for the day was to search for furniture for the house so we decided since we're in the area, we'll take a detour to Plaza Ampang City. Splashie Boy had a crazy idea to walk all the way from KLCC there so we took a morning stroll there. Luckily it was a nice cloudy day or else you'll hear loud protests from me. The place is really deserted and the only nice place was Xtra Living selling branded stuff like Ghost chairs, Herman Miller office chairs (drool! drool!), Alessi, Kartell and etc. We did find a fantastic cookshop next to it called Pavillion which we plan to go back and spend lots of money on. 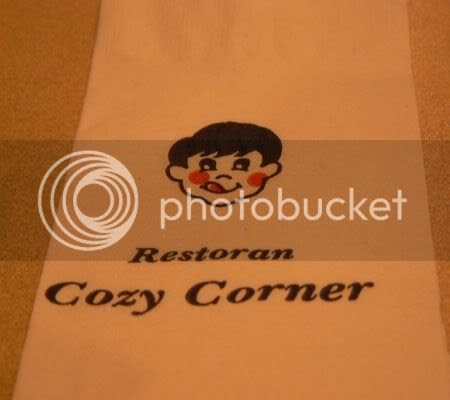 A quick walk at the bridge between Plaza Ampang City to Ampang Park got us exploring the place. Original plan was to head towards the Bagel Station at Avenue K but since we were at Ampang Park, we decided to check out the place. We found this Cozy Corner place which I remember someone telling me it's famous. At first we were confused since we found Cozy House and then Cozy Corner at the same row. I thought they were the same owners and they had a branch at Great Eastern Mall until a quick chat with one of the captains revealed that they are not related at all! It seems Cozy Corner has been in business for a grand old 33 years (I guess since Ampang Park opened) and they have a genuine branch which just opened at Putrajaya Alamanda. We had to take a picture of their cute logo of the boy licking his lips. Incidentally Cozy House has the exact logo so I guess imitation is the greatest form of flattery. 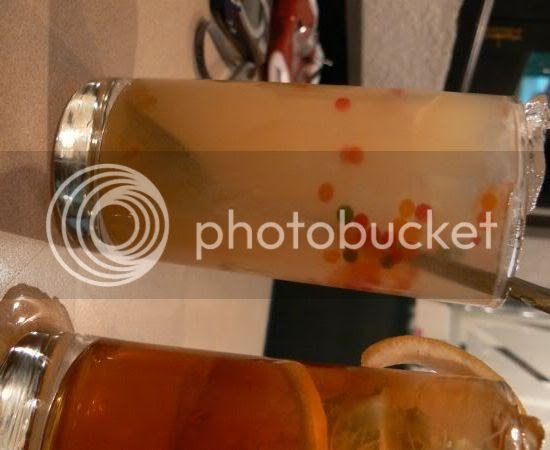 The place is quite dark and has black and white lines on their walls that kinda remind me of the colonial British houses. Splashie Boy was busy testing the camera in the low light conditions and although it protested a few times when the light was quite low, he did manage to get some good shots. Picture of our drinks, they had this citron lemon(RM5.50++) which came with these adorable coloured round little jellies. Tasted pretty good too - much better than my boring ice lemon tea(RM3++). 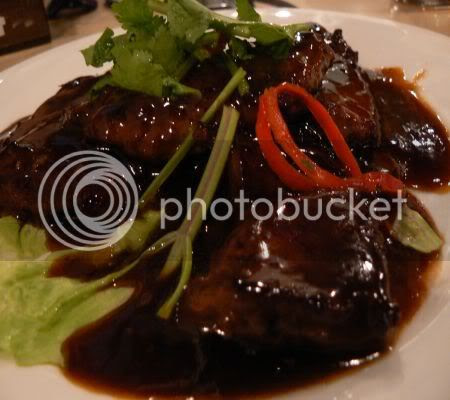 This place serves Western and Chinese food. We decided to eat rice with a few dishes. I wanted to order this straight away when I saw it on the menu - their beef with Chinese sauce (RM16++). Fantastic stuff as they had pounded the beef till it was nice and tender. Sauce was also yummy which went so well with rice. We also ordered Kailan with Oyster Sauce(RM9++) which was blanched kailan with a not too salty oyster sauce topping. 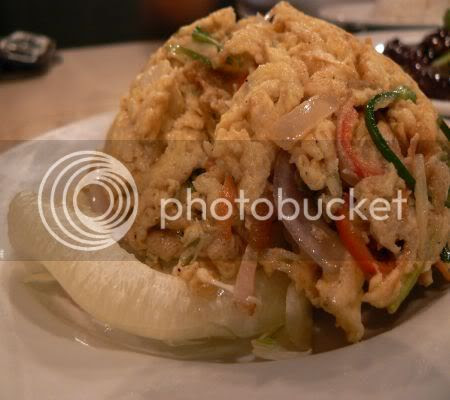 Splashie Boy wanted the Egg Fuyong(RM8++) which we ordered. We thought it was so so and it I am not mistaken the menu said crab meat which is devoid in our portion. Tasted just like scrambled eggs.
The place was packed during lunchtime with families having their Sunday lunch. Saw lots of people ordering the Western meals so we may give that a try the next time we come. It's actually a hop and a skip away from KLCC vide the train if you are bored with the food around the area. On the walk back, we spied a film crew in front of Avenue K - think they were shooting a hair commerical as they had the model/actress stand still with her hair at one side, ready for a flip hair shot. No pictures taken as they all looked really threatening with their security detail.
Restaurant Cozy Corner
Lot 266-271 (First Floor)
Ampang Park Shopping Centre
Jalan Ampang
Tel No: 03 - 2161 5649
*Disclaimer: The opinions expressed here is entirely based on my personal tastebuds and may vary for others. The reviewer also declares that she has not received any monetary or non-monetary compensation from the restaurant for writing this review

Yes you are right, Cozy corner has been around since donkeys years. I remember way back then, that I love to eat their chicken chop, beef steak and kung foo friend mee. Yummy.

This place gets really packed, esp during buka puasa time!

The quality of some of the dishes served there used to be good, but I've since stopped going after a few mediocre plates.

love this place. :) the other time when I was there, only had the beef and erm...kangkung i think but it was really good with the rice. :)

wow I didn't realise cozy corner still exists! I can't remember the last time I was there BUT I still remember going there as a child my old favourite was the sweet corn soup ;-)

i've to get myself on a plane home-bound .. these restaurant reviews are too tantalizing...

flower - wow! I never been so I must have had a deprived childhood. Only went to places like Castell and the Ship.

honey star - I can imagine it packed as it was packed during Sunday already.

skyjuice - yeah, the egg fuyong was not their best but I reckon we ordered the wrong thing.

ddonkey - I wanted kangkung but decided not to at the end since we just ate it recently at another Nyonya place.

Valisa - still there and going strong according to them 33 yrs old but I did find one website that said it started in 1978 so it's even older!

for today's lunch at cozy corner .. i had seafood tomyam, kung po chicken, sambal petai udang, and tofu with crabmeat gravy. and yes, you may drool cuz they're delicious!! the prawns they used in the sambal was succulent and bigger than the average. the servings were very very generous for 3 persons.

definitely gonna comeback for their lobster cuz i saw most of the customers ordered it.

it was not a good experience dining here this afternoon and we decided to blacklist this reataurant for its cold hospitality and unfriendly services coming from the waiters/waitress and the supervisor especially so.
after taking our food we paid for the bill at the dining table and left the reataurant quietly. i accidentally left my hp at the table and when we returned after less than 10 minutes, the unfriendly supervisor mentioned that no hp was left when they cleared the table. he was so arrogant and cold hearted i just wished that ours was not his first experience...two times we went in to check but we did not receive the needed hospitality. too bad for the restaurant for its intergrity questioned. no extra help and comfort given. i pray for it to close shop for all the sombong workers there. afterall, the food served were so-so taste only. please don't patron here anymore.